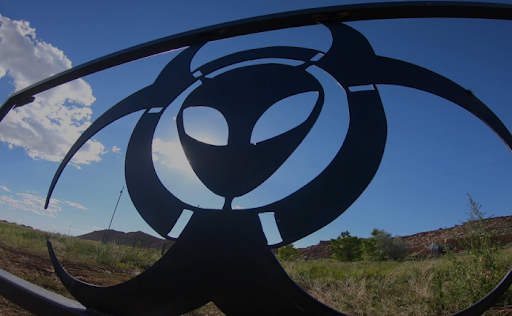 • 150 years ago, the Native American Utes tribe were fierce enemies with the Navajo tribe. The Utes captured and enslaved Navajo. In return, the Navajo put a curse on the land. Ever since, this region of the Unitah Basin in what is today the state of Utah, in the United States has been rife with paranormal activity due to the shape shifters, known as ‘skinwalkers’, that roam the earth in the guise of giant creatures, according to Native American legend. For over 100 years, reports of strange noises, bizarre sightings, mutilated cattle, crop circles, and giant wolves have emanated from the ‘cursed’ 512 acre Skinwalker Ranch.

• In 1992, the Sherman family became the owners of the Skinwalker Ranch. They found their cattle dead in fields, drained of their blood, and with no pools of blood nearby. A quarter of their herd died under these gruesome circumstances. The Shermans say that they were ‘terrorized’ by strange beasts that would stalk their ranch. In one reported incident, a giant wolf came in off the plains, put his head through a holding pen and started pulling one of the calves out of the fence. Mr Sherman shot the wolf eight times before it let go and ran away. Chasing the animal to a river, Sherman noted that the wolf’s pawprints led to the river, but didn’t continue on the other side of it. “(The wolf) seemed to ‘vaporize’ by the time it had reached the other side.”

• In 1996, the Shermans sold the ranch to billionaire Robert Bigelow who wanted to scientifically study the paranormal events associated with the property. Bigelow recruited an army of experts – several of whom have vowed never to set foot on the property again because of what they found. In 2016, Bigelow sold the ranch to real estate magnate, Brandon Fugal. Fugal has been recording everything that happens on the site including UFOs and ‘light pillars’ reaching into the sky above the ranch.

• Researchers have measured unusually high recordings of electromagnetic waves and radiation at the ranch. Fugal recruited NASA astrophysicist, Dr Travis Taylor to look into it. Dr Taylor’s explanation goes back the 1950’s where above-ground nuclear bomb tests were conducted in neighboring Nevada. Some of the highest concentration of radioactive fall-out was recorded in northeast Utah just 30 miles from the ranch. Travis goes so far as to say, “It’s possible that exposure to radioactive fall-out could cause people to have strange symptoms or hallucinations and see, hear and even do things that might seem abnormal.” Doc Taylor plans to dig further on the site for more clues.

• Ranch superintendent Tom Winterton, however, cautions against digging on the Skinwalker Ranch. Winterton says he did some digging there, and a few days later he noticed a “goose egg” that had formed on the back of his head. By the time his wife brought him to the hospital emergency room, it had spread through his entire head. “My scalp separated from my skull and the pain was excruciating. The doctors didn’t know what had caused it or how to fix it,” said Winterton. “They were telling me that what had happened was medically impossible, and it caused a severe injury. I know I was warned not to dig but I didn’t believe it.”

The ‘cursed’ ranch in Utah in the US is the centre of some of the strangest unexplained incidents in the modern world.

Named after an old Native American belief that shape shifters, known as skinwalkers, roam the earth in the guise of giant creatures – and the ranch is said to be right in the path of one such group of beings.

For more than 100 years reports of strange noises, sightings and even deaths have haunted the 512 acre ranch, which is built in the Unitah Basin that was once home to a Native American tribe.

As early as 1911 there were reports of strange noises coming from the basin and those living on the ranch reported bizarre sightings. By 1979 these had become terrifyingly common.

People living on, or visiting the ranch, have also experienced a raft of strange symptoms from vertigo to nausea and even temporary paralysis.

In 1992 the Sherman family bought the property and things became very dark – cattle were found in fields drained of their blood and with no pools of blood nearby.

As many as a quarter of the herd died in these gruesome circumstances and the Sherman family were so scared by what was happening, the put their home up for sale.

Billionaire Robert Bigelow bought the ranch from the Shermans in 1996 and launched a huge scientific study into what was happening there.
He recruited an army of experts – several of whom have vowed never to set foot on the property again because of what they found.

• As many know, the Rendlesham Forest UFO incident in Suffolk, England occurred when American personnel from nearby military base RAF Bentwaters claimed they saw unusual lights, a mist, and a delta shaped craft with a ‘non-human’ entity in the forest. Skeptics blamed it on everything from bright stars, to a lighthouse, to a British prank on the Americans. The British Ministry of Defence stated at the time that the event posed no threat to national security and therefore it was never investigated. Today the forest is a popular destination for families and even has its own ‘UFO trail’.

• The film production company, ‘Indigo Transmit’ based in Ely, Cambridgeshire, UK, is currently in production on a new feature-length documentary movie about the Rendlesham Forest Incident entitled ‘Capel Green’, based on real-life events that were reported by military personnel back in December 1980. (see 4:37 minute trailer below)

• The filmmakers claim they have new witness accounts never before revealed on camera. One of them is sergeant Michael Stacy Smith who says he saw a red “glowing ball” two feet off the ground at the site. He said that he even cocked his M60 machine gun. “I was scared to death, I didn’t know if it was going to hurt me,” Smith told the filmmakers.

• The film’s director and producer, Dion M. Johnson, touts the use of aerial drones to capture “spooky aerial footage” and to recreate an alien spaceship hovering over a Suffolk forest. The drone photography gives “this film a unique cinematic feel,” says Johnson.

The famous case of an alleged Suffolk UFO sighting is the focus of a new film – with a Norfolk drone operator playing the ‘alien’.
Graeme Taplin – who runs Drone Photography, and whose day job usually consists of flying his craft over houses and fields for commercial use – never imagined he would be playing a starring role in something right out of the X-Files.

But when invited to recreate an alien spaceship hovering over a Suffolk forest, Mr Taplin, from Bunwell, was delighted.

His drone creates spooky aerial footage for a new feature-length documentary Capel Green, based on real-life events that were reported by military personnel back in December 1980.

The incident, so famous it is often called ‘Britain’s Roswell’ referring to an event in the US in 1947 when people believed a spaceship had crashed landed, recalls a night of unexplained events in a field called Capel Green at Rendlesham Forest, near Woodbridge.

A group of American personnel from nearby military base RAF Bentwaters claim they saw unusual lights, a mist and delta shaped craft with a ‘non-human’ entity. At the time the MOD stated the event posed no threat to national security and it was therefore never investigated. Sceptics have said it was everything from a fireball to a nearby lighthouse or bright stars. More recently, it was said to be a prank by the British on the Americans.

Is There Extraterrestrial Life, Has It Visited Earth?

• NASA astronaut Story Musgrave has been to space six times. On one occasion, he helped to fix the Hubble Telescope. And he’s the only astronaut to have flown aboard all five Space Shuttles. But what does he think about UFOs and extraterrestrial life?

• Musgrave points out that, statistically speaking, there are billions and billions of planets that must have biological life. These biological entities have had millions of years to evolve. If so, they’ve certainly developed technology that would lead to star travel by now. They’re very likely to have been outside of their solar systems, and maybe outside of their galaxy. While here on Earth, humans have only begun to technologically develop over the past few hundred years.

• As far as UFOs and extraterrestrials visiting the Earth, “I want that to happen,” says Musgrave. “I send prayers out there for them to come and get me.” “First, you have to acknowledge that they’re there. If you turn your back, they’re not going to come.”

• For 30 years, Musgrave says, he’s been “listening to everyone’s tales.” But he feels that “there’s just not enough evidence” of extraterrestrial beings visiting our planet. Also, why would extraterrestrials want to come to Earth, he asks? “If you look at the number of wars going on, the history of humanity and its relationship to itself… there’s nothing to learn here, not yet.” “There are more promising places.”

• [Editor’s Note] Apparently, Story Musgrave is still collecting his government pension and doesn’t want to say anything to jeopardize it.

Story Musgrave has led a storied life. He is the only astronaut to have flown aboard all five of the Space Shuttles – Endeavor, Discovery, Atlantis,

Challenger and Columbia, the last two of which had mishaps that destroyed the spacecraft after he had flown in them. Musgrave has also been to space six separate times, just under the record of seven held by Franklin Chang-Diaz and Jerry Ross. In addition to Musgrave’s career as an astronaut,

he has worked as a trauma surgeon and currently owns a palm tree farm. Thirty years ago, he made history by helping fix the fragile Hubble Telescope. I thought it would be interesting to talk with Musgrave now, given the important Hubble anniversary later this week. In a one-hour phone interview, he discussed many things space, including the topic of UFOs. Following are edited excerpts from a spirited chat.

Jim Clash: What is your view on the topic of extraterrestrial life in the universe?

Story Musgrave: There are millions if not billions of them out there. We think we are the center of the universe, that the whole universe revolves around Earth. But they are coming up with so many new planets now. There are like 10 to the 29th stars, a number I can hardly wrap my fingers around, and most of them have planets. A planet can be at a place that’s friendly to biological life. Statistics have it that there are billions and billions of planets that have biological life. If they’ve behaved themselves and gotten their acts together, looked after themselves, there are millions of years for these people to have evolved, to have developed a technology that would lead to star travel. They’re outside of their own solar systems, maybe outside of their own galaxies, too. But here on Earth, technology only began probably 300 or 400 years ago, with the Industrial Revolution.