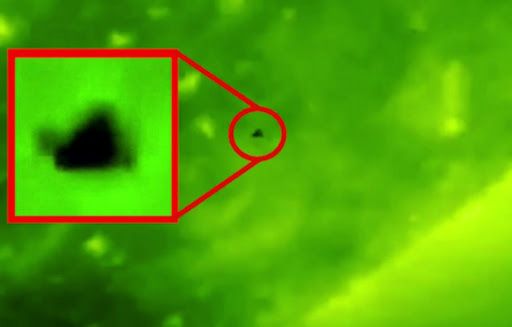 • Video from a telescope has captured a black triangular object the size of the Moon that has been locked in orbit with the Sun for at least nine months. The dark color of the object indicates a relatively low temperature. This seems strange given the object’s close proximity to the Sun. (see 3:06 minute video below)

• It does not appear to be a spot on the surface of the Sun itself. Could it be a secret asset of the U.S. or another leading space power? Ufologist Scott Waring says that the object was only discovered thanks to new equipment.

• Waring believes that the object is an alien space station. Alien technology allows the object to withstand the Sun’s heat radiation.

Black triangular object the size of the moon rotating with the Sun at least nine months, says ufologist Scott Warring. It was discovered thanks to the new equipment.

The researcher put forward several hypotheses regarding the origin of UFOs. In the first, the telescope was able to capture spot on star. Scott Warring calls this assumption incorrect. The second version says about the launch of the mysterious object people, or rather the governments of the leading space powers. Moreover, the population was not warned about this project. According to the third assumption, the cameras captured the station of aliens. The color of the object indicates a relatively low temperature of UFOs. This may seem strange, given the proximity of its location with the hot Sun. However, the Warringah’t see anything surprising. In his view, the aliens have reached a high level of technology that allows them to have large research facilities near the emitting light and the radiation of the stars.

UFO researcher has shown that online video, which depicted a dark triangular UFO in the Sun. However, it still remains a mystery, an artificial or natural object hit the camera lens. In the American space Agency NASA does not comment on published video.

3:06 minute video of object beside the Sun (‘ET Data Base’ YouTube)