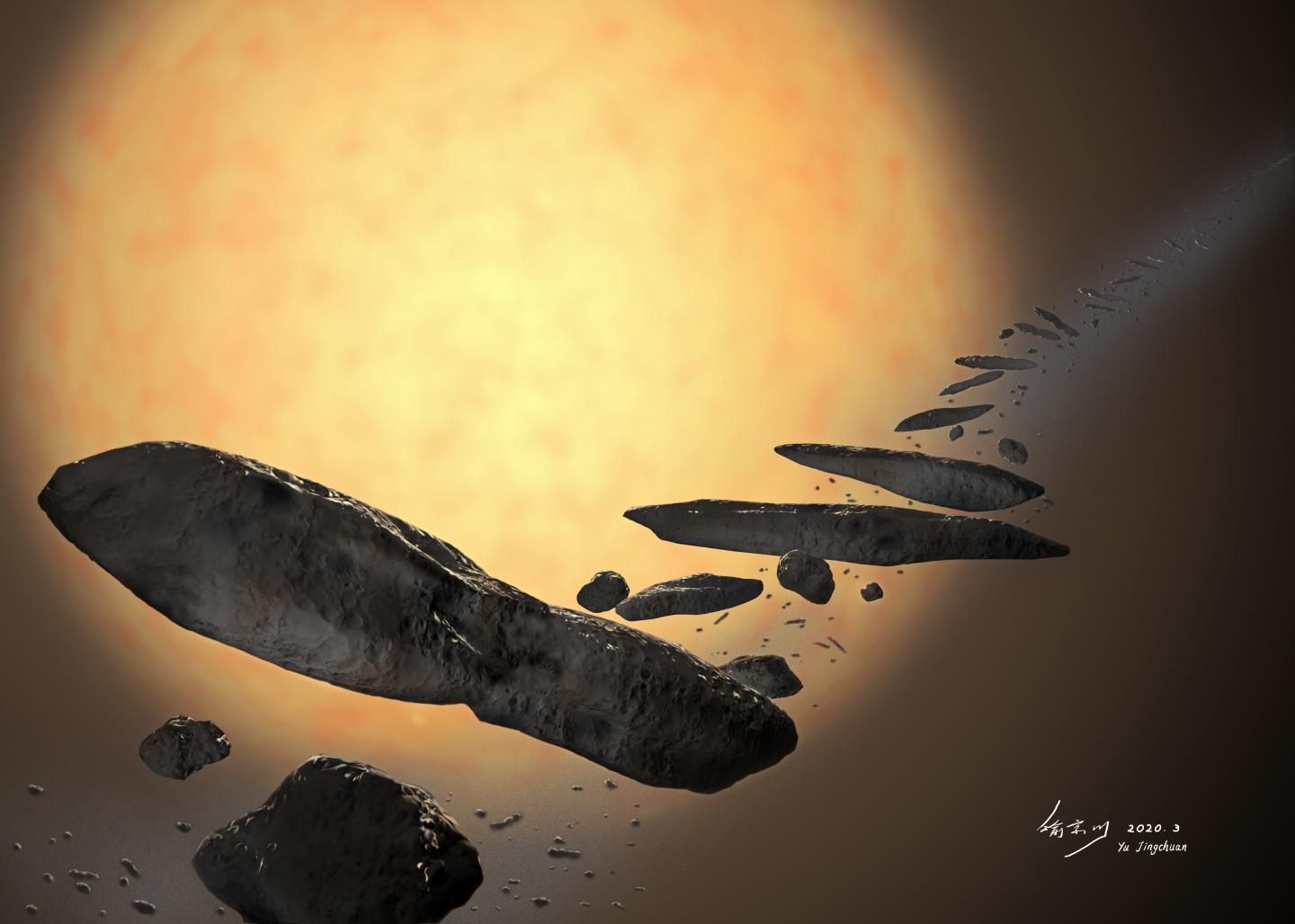 • On October 19, 2017, astronomers in Hawaii first spotted a 1,300 feet, cigar-shaped, reddish, dry, strangely-elongated object passing through our solar system. Dubbed ‘Oumuamua’, this was the first interstellar object that we’ve seen passing through our neck of the galaxy. It became the subject of much speculation, especially after it accelerated away from the Sun in a trajectory not explainable by the effects of gravity. Some even brought up the idea it might an extraterrestrial spacecraft or a probe.

• A new study conducted by Zhang Yun from National Astronomical Observatories of Chinese Academy of Sciences (NAOC) and Douglas N. C. Lin from University of California, Santa Cruz, says the mystery object Oumuamua is natural. Zhang and Lin believe it’s a piece that was ripped off of another celestial object by a larger object. Clues of its natural origin include the object’s coloring and its lack of any radio emissions coming from it.

• As to Oumuamua’s sudden acceleration away from the Sun, the researchers concluded that, although the object appeared ‘dry’, the Sun heated up the water ice under its surface resulting in a release of gas that served as a propellant.

• The scientists propose that when an object travels close by a star, the star’s gravitational “tidal forces” cause the object to break apart, melt and stretch into elongated fragments. The object then cools off as it moves away from the star, hardening into a crust. “This,” says Zhang, “would account for the vast population of rocky interstellar objects.” He thinks that all types of space objects, like comets, debris disks, and possibly even planets, can be turned into elongated Oumuamua-size bodies upon getting close to a star.

• The researchers believe that there are more such rocky objects flying in between solar systems than they previously considered. “‘Oumuamua is just the tip of the iceberg,” said Lin, adding, “We anticipate many more interstellar visitors with similar traits will be discovered by future observation.”

Scientists may have discovered the origins of ‘Oumuamua, the first interstellar object that was spotted visiting our Solar System. The reddish, dry, and strangely-elongated ‘Oumuamua, known to move in unexpected ways, has been a subject of much speculation. Some have, of course, brought up the idea it might an extraterrestrial spacecraft, possibly a probe. Now, scientists propose that tidal forces, gravitational interactions similar to those on Earth, are responsible for its existence and unusual behavior.

The cigar-shaped ‘Oumuamua is 400 meters (1,300 feet) in length and was first discovered on October 19, 2017 by the Hawaii-based Panoramic Survey Telescope and Rapid Response System 1 (Pan-STARRS1). Scientists and armchair astronomers the world over have since wondered about where it came from, especially in light of factors like its acceleration away from the Sun in a trajectory that is not explainable simply by the effects of gravity.

The new study, which was carried out by by Zhang Yun from National Astronomical Observatories of Chinese Academy of Sciences (NAOC) and Douglas N. C. Lin from University of California, Santa Cruz, says the object of mystery is natural. Clues pointing to that include the space body’s colors and the lack of any radio emissions coming from it.

While scientists expect an interstellar visitor to be icy, like a comet, Oumuamua is dry and has a rocky body like an asteroid, leading the researchers to conclude that there are more such rocky objects flying in between solar systems than they previously considered.