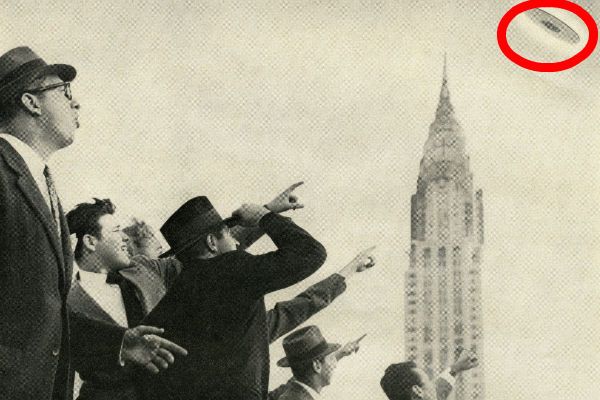 Listen to “E142 10-26-19 Scientists Wonder If Extraterrestrial Life Has Visited Earth” on Spreaker.

• When people think of UFOs, they typically think of craft flying over their heads. No one talks much about the possibility that intelligent extraterrestrials may already be here among us on Earth. Last year, after writing a paper on theoretical ways for SETI to detect an alien presence, NASA physicist Silvano Colombano was accused by Fox News of claiming that aliens have indeed come to Earth. Colombano was quick to correct the Fox News story, saying that he believes an alien visit is only theoretically possible. However, Colombano also stated that “reports of unidentified aerial phenomena should be the object of serious study.” But mainstream scientists are loath to even discuss an extraterrestrial presence, much less study it.

• So the discussion about UFOs and extraterrestrials has been relegated to ‘claims’ and ‘theories’. Claims such as a New Hampshire couple being abducted by aliens one summer evening in 1961; or theories such as Harvard Professor Avi Loeb assertion that the rogue “asteroid” Omuhamuha may have been an alien probe, which “elicited some derision from scientists.”

• The vast majority of our efforts to discover intelligent extraterrestrials has been by looking out beyond our planet. The ‘Search for Extra-Terrestrial Intelligence’ or ‘SETI’ employs more than 130 scientists, educators and administrative staff in a quest to “explore, understand, and explain the origin and nature of life in the universe and the evolution of intelligence.” They do this by monitoring telescope arrays that study the characteristics of red dwarf stars and newly-discovered exoplanets. Unfortunately, SETI has recently had to cross a large number of potential exoplanets off of their list for having “unsuitable environments”.

• [Editor’s Note]   So this is where the line is currently drawn. The compromised media welcomes any news on a ‘scientific research group’ like SETI (also compromised) searching for life on other planets, but they will attack you as soon as you suggest that the aliens are already here. Organizations such as Fox News and SETI only exist to do the Deep State’s bidding, which in this case is to make it sound like smart people are doing everything possible to find other extraterrestrial life or even a viable explanation for UFOs, but alien civilizations beyond the Earth simply do not exist. They have most of the world believing this. The Deep State and the elite they protect does not want people to know that they have been fleecing the natural and economic resources of the Earth and its inhabitants for the past seventy years in order to develop advanced technologies and create a secret space program to rival the other space programs, both human and extraterrestrial, that exist all around us and throughout the galaxy. And they will stop at nothing to prevent the population from “waking up” to this reality.

Of course, whether extraterrestrial life has actually touched the soil of Earth — or floated above it, observing us all — has been a burning question for almost as long as humankind could look at the stars. The many claims of alien sightings, often buttressed by grainy photos of UFOs, and the many theories about outer space creatures already living among us could fill enough books to weigh down a spacecraft that’s collecting samples of our planet.
One thing is for certain: The public and private agencies that deal with all things space focus on finding life away from Earth. They are not researching, at least publicly, the scientific possibility of whether aliens have already been on our planet. For that matter, governments answer stories of UFO sightings on Earth by pointing to the weather or by saying the claim couldn’t be corroborated. There are no official records of aliens visiting Earth.

Discussion about aliens on Earth can be, for the sake of argument, placed into two camps: claims and theories. Claims are those that appear on the covers of supermarket tabloids or occasionally make for a fun feature in a mainstream news publication. For instance, a New Hampshire couple that spoke of being captured by aliens on a late-summer evening in 1961 as they drove through the White Mountains is the first widely-publicized alien abduction claim, a tale that started a legion of others.

Theories of alien visits can also spread like wildfire in the mainstream news if they are made by someone with authority. It happened only recently. Avi Loeb, the chair of Harvard University’s astronomy department, didn’t propose that aliens were even close to Earth. Rather, he and a colleague posited that Oumuamua, a cigar-shaped comet or object that whizzed by the sun in 2017, might have been a probe sent to the vicinity of Earth by an alien civilization. The theory, published in The Astrophysical Journal Letters, elicited some derision from scientists.

The minor controversy led NASA physicist Silvano Colombano to say that scientists essentially rock the establishment when they theorize about extraterrestrial life. “General avoidance of the subject by the scientific community” creates a catch-22, Colombano told Quartz. He means that scientists might appear crazy for posing questions about aliens, but society will never know about alien life or any possible alien missions to Earth if no one in the scientific community examines the concept.

Colombano himself got caught up in the debate last year, when Fox News reported he claimed aliens have indeed come to Earth, pointing to a document of his on the space agency’s website. But Colombano was quick to correct the Fox News story, saying it was taken out of context and that he believes an alien visit is only theoretically possible. “My perspective was simply that reports of unidentified aerial phenomena should be the object of serious study, even if the chance of identification of some alien technology is very small,” he told Live Science.