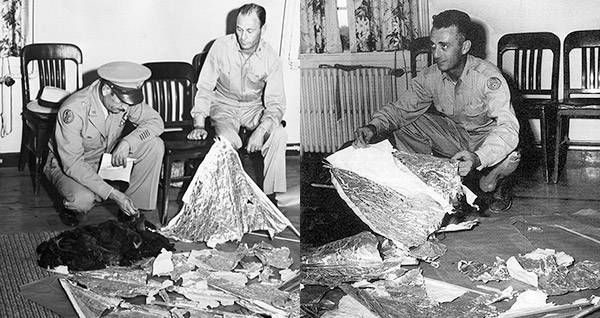 • June 1947 was the height of the UFO craze. Kenneth Arnold had reported seeing nine unusual saucer-shaped objects near Mount Rainier, Washington and news of his sighting was reported around the world. It was with that news fresh in mind that New Mexico rancher, W.W. “Mac” Brazel, told local Sheriff George Wilcox that he’d found the wreckage of “a flying disc” on his property some 80 miles northwest of Roswell.

• Brazel and his son had come across something inexplicable that day – in his words, “a large area of bright wreckage made up of rubber strips, tin foil, and rather tough paper, and sticks”. Sheriff Wilcox advised a local Air Force colonel, who told his superiors, who put Intelligence Officer Major Jesse Marcel (pictured above, right) in charge of investigating the crash site and collecting the wreckage. Marcel issued a statement to the press. On July 8, 1947, the Roswell Daily Record’s front-page headline read ‘RAAF Captures Flying Saucer On Ranch in Roswell Region.’

• A month earlier, however, on June 4th, 1947, a huge balloon designated NYU Flight 4 lifted off from Alamogordo Army Airfield to a height of 40,000 feet as part of Project Mogul, a top-secret project run by the US Army Air Force to detect Soviet nuclear tests. This is what crashed on Mac Brazel’s ranch.

• Or was the crash, as some claimed, an experimental Nazi “stealth bomber” that the Soviets had captured, filled with genetically-altered children, and deliberately crashed in America on Stalin’s orders in order to sow fear and panic? Or was it the work of a sinister cabal of Jesuit priests who have anti-gravity aircraft and artificial hybrid humans? Or was it the fallout from a firefight between Grey aliens and the US Delta Force in tunnels under New Mexico? Or the unsuccessful test flight of a captured UFO from the base at Groom Lake known as Area 51?

• No. It was a surveillance balloon. Roger Launius, former curator of space history at the Smithsonian’s National Air and Space Museum in Washington, D.C. told Smithsonian Magazine: “Apparently, it was better from the Air Force’s perspective that there was a crashed ‘alien’ spacecraft out there than to tell the truth. A flying saucer was easier to admit than Project Mogul, and with that, we were off to the races.”

• So the Roswell crash wasn’t anything as exciting as an extra-terrestrial craft. The chance that the government could have covered-up an event of this magnitude, lasting 72 years, through multiple presidencies and administrations, seems extraordinarily slim.

• [Editor’s Note]    Ah yes. This is the maturing of a long-standing government cover story, brought to you by none other than the Smithsonian Museum, a notorious Deep State bastion of secrecy and disinformation. The Deep State is getting worried that so many people are beginning to see through their ruse. They need to reaffirm the cover story to maintain their base of skeptics who are conditioned to automatically deny UFOs and extraterrestrials. Here, they employ all of the standard devices. They note the hysteria brought on by Kenneth Arnold’s claimed sighting just weeks earlier. They make the eye witness Mac Brazel seem like an unreliable idiot. They bring up the communist Soviet menace that America was defending itself against. They trot out several other notions just as ridiculous as a ‘flying saucer from Mars’. Then they turn to a historical expert – a curator for the Smithsonian – to confirm that the cover story is indeed the most plausible. ‘We didn’t want the Soviets to know about our secret eavesdropping balloon’. Anyone who chooses to buy this nonsense is predisposed to believing anything the government tells them. But more and more folks are waking up to the fact that the elite Deep State government is in it for themselves, and not the people.

The story began a few weeks earlier when rancher W.W. “Mac” Brazel was driving across his property some 80 miles northwest of Roswell with his son.

The pair came across something bizarre and inexplicable that day. It was, in Brazel’s words, “a large area of bright wreckage made up of rubber strips, tin foil, and rather tough paper, and sticks”.

Brazel noted the unusual wreckage but left it alone, not returning to the site until July 4.

It was the height of the UFO craze. In June 1947 Kenneth Arnold had reported seeing nine unusual saucer-shaped objects near Mount Rainier, Washington and news of his sighting was reported around the world.

It was with that news fresh in his mind that Brazel confided to local Sheriff George Wilcox that he might have found the wreckage of “a flying disc”.

Wilcox advised a colonel at the local air force base, and the news worked its way up the chain of command.

Intelligence officer Major Jesse Marcel was put in charge of investigating the crash site and collecting the wreckage.

When this was done, Marcel issued a statement to the press. On July 8, Marcel’s statement was on the front page of the Roswell Daily Record, underneath that famous headline.

The story contained this earth-shattering sentence from Marcel’s release: “The intelligence office of the 509th Bombardment Group at Roswell Army Air Field announced at noon today, that the field has come into the possession of a Flying Saucer.”

But was that true?