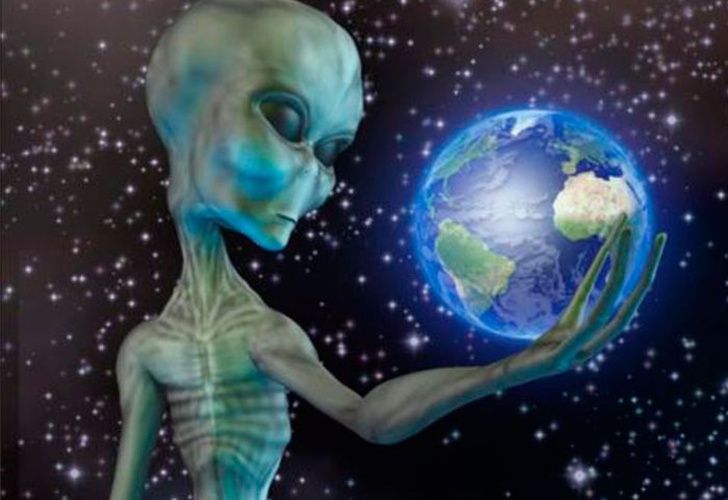 We Keep Looking for Space Aliens. Are They Looking For Us?

• “It seems a safe bet that if advanced aliens do exist in our galaxy, they would at least know our planet is here,” says Seth Shostak, senior astronomer at SETI, the Search for Extraterrestrial Intelligence. The real challenge for these inquisitive ET species isn’t finding habitable planets such as Earth, it is discovering details that will narrow their search – mass, size, approximate temperature. The aliens will have really big telescopes trained on us. Being aware of our world and its properties, would they be spurred to transmit signals in our direction? Extraterrestrials could have learned enough about us by now to even pay us a visit.

• An enormous alien telescope would see the Earth as a dot of light. Directed through a prism, they could analyze its spectral fingerprint and detail the Earth’s atmosphere. Researchers here on Earth recently used spectroscopy to detect water vapor in the atmosphere of planet K2-18b, 110 light-years from Earth. An alien telescope could surely detect oxygen on our planet. Oxygen betrays photosynthesis, a sure tip-off that this is a living planet. Light patterns would tell the alien astronomer that the Earth rotates, perhaps even revealing oceans and continents in low-res images.

• Shostak continues to ruminate: “If we can imagine it, some of (the aliens out there) have probably done it. Of course, the most interesting thing these hypothesized neighbors might find is not the outlines of the Americas or even the oxygen in our atmosphere. They might find us.” If they’re within 70 light-years of us, they could pick up the radar or television signals that we’ve been sending into space since during World War II. Roughly 15,000 star systems lie within 70 light-years.

• Researchers using data from NASA’s Deep Space Climate Observatory recently simulated how an extraterrestrial astronomer might gather information on the Earth, resulting in a world map more accurate than the Greeks had. It’s hardly inconceivable that alien astronomers have not only found Earth but learned that we humans inhabit it.

• [Editor’s Note]   The assumption that Shostak is making here, is that intelligent extraterrestrial civilizations are as technologically deficient as we are here on earth – taking spectrometer readings from telescopes to search the galaxy for the elusive intelligent civilization. In reality, the plethora of extraterrestrials with advanced technologies have far more effective ways of watching us than telescopes, and they are literally here already. But Shostak goes through this meaningless drill of speculating what non-terrestrial aliens would do if there were any alien civilizations out there whose technology had “equaled” our own. Not that we don’t possess advanced technologies ourselves. But the elite power brokers on the planet have prevented the general populace from having knowledge of or access to these technologies. Instead, they limit the use of these technologies to their super-secret space programs and black projects, which Shostak’s disinformation is intended to hide.

The truth is that the extraterrestrial beings that are visiting our solar system and interacting with certain elite factions of our human species are far more advanced in their technological development than we. They know everything about us. But Shostak and his Deep State handlers want people to think they are continuing the hard work of searching for extraterrestrial worlds and beings. And since they haven’t found any (on purpose), there must not be any extraterrestrials out there who can reach our star system. It is all a carefully controlled psy-op that SETI has helped to perpetrate since 1960. But when it is finally revealed that advanced extraterrestrial beings not only exist but have been here throughout the history of this planet, Seth Shostak will be out of a job.

Scientists have been trying to discover planets around other stars for generations. They finally succeeded in the 1990s, and more than 4,000 have been catalogued since then.

But could aliens have found our planet? Is Earth cataloged by even a single population of extraterrestrials? If so, what do they really know about terra firma?

You may consider this an idle question, of no greater importance than asking if gerbils enjoy oboe concertos. But the answer is of real consequence for those who scan the skies for signals from intelligent aliens. After all, if extraterrestrials are unaware of our world and its properties, what would spur them to transmit signals in our direction?

Additionally, if you’re among the many folks who are convinced that aliens are sailing through the troposphere, it might help your self-esteem to know that extraterrestrials could have learned enough about us to pay a visit.

It seems a safe bet that if advanced aliens do exist in our galaxy, they would at least know our planet is here. If human astronomers can find thousands of worlds in two dozen years, how many exoplanets —planets around other stars — will the denizens of other solar systems find in, say, a millennium of slogging away?

The real challenge for these exo-catalogers isn’t finding the planets, but discovering details beyond the gross characteristics — mass, size and approximate temperature. To learn more, the aliens will need really big telescopes.