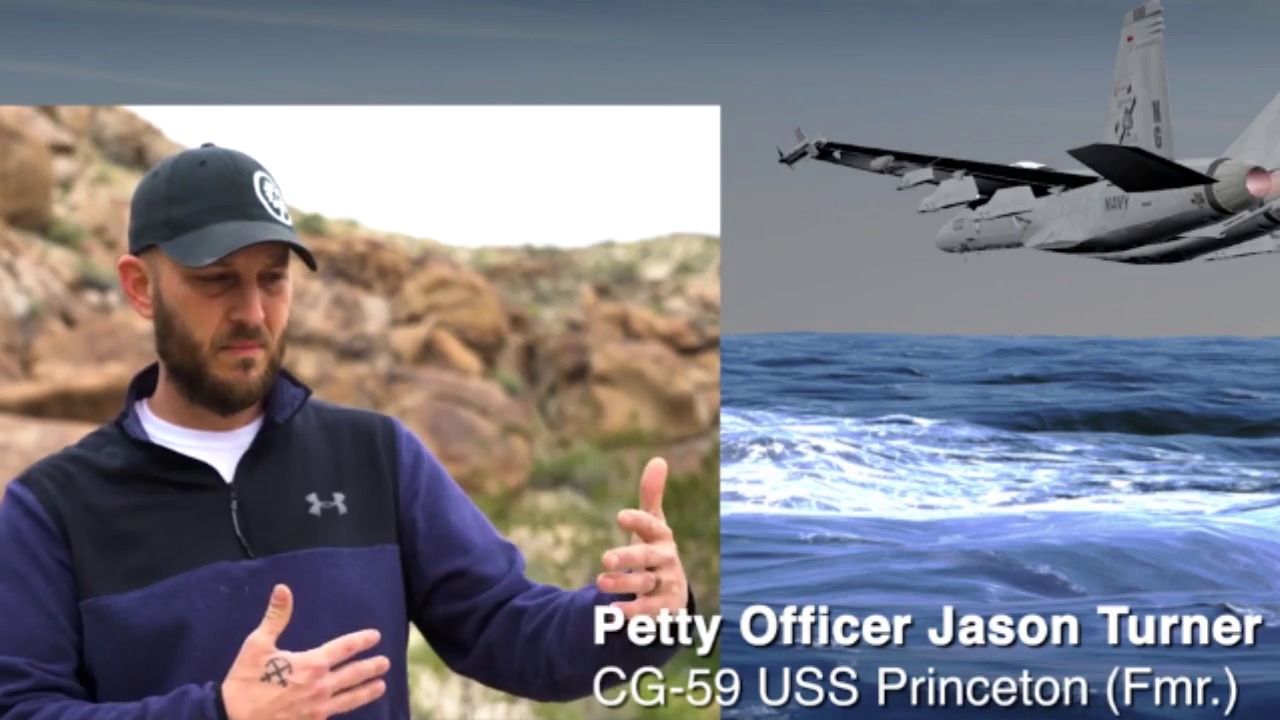 • Jason Turner (pictured above) was a Petty Officer on the USS Princeton in the USS Nimitz carrier group when fighter jets from Nimitz encountered a ‘tic tac’ UFO off the coast of San Diego in 2004. Cockpit footage of the encounter was released in 2017. Despite being grainy, the video has gone on to become one of the most widely-cited clips that conspiracy theorists use to prove the existence of UFOs. (see 2:45 minute video below) Turner says that he has seen a much clearer, unreleased version of the ‘tic tac’ UFO video which shows the craft having legs protruding from it.

• “The quality [of the unreleased video] was very clear,” Turner told Dave Beaty of The Nimitz Encounters YouTube channel. “What the [fuzzy and grainy] video you see now is just a small snippet. You’re seeing small turns left and right but this thing is so much more than what you see in this video.” “It was always really clear but what you see now is, hardly identifiable.” (see 15:09 minute video of Beaty’s interview with Jason Turner below)

• Turner goes on to describe the UFO: “The shape of it [was odd] as it had some protruding objects at the bottom of it. I couldn’t tell if they were curled back or straight down because I was a good five or ten feet from the feed.” “But there were definitely legs on it. It was oblong, like a tic-tac.”

• Turner says that he had “never seen anything like it”. “[I]f there are things that are far superior to us and our capabilities… It puts everybody at risk – our military, our people, our homeland.” Several other witnesses of the UFO have come out since the initial revelations in 2017.

Also, see “Navy pilot who chased USS Nimitz UFO says there are tapes of encounter ‘missing'” (Daily Star, Nov 6, 2019) wherein Navy pilot Commander David Fravor, who saw the ‘tic tac’ UFO, told the ‘Fighter Pilot Podcast’ that after the pilots’ encounter with the ‘tic tac’ UFO, “We copied the (radar) tapes and wrapped them up… They were put in a safe on the Princeton.” Now, “All the radar tapes from the Princeton are missing and they can’t find (them).” ”Also, someone at the ‘archives’ told Fravor “someone has taken that page from the logbook.”

A US Navy officer who witnessed the USS Nimitz UFO encounter has revealed the object had mysterious legs protruding from it, in a clearer video not released to the public.

Jason Turner was a Petty Officer on the USS Princeton when fighter jets from nearby ship USS Nimitz encountered a strange object off the coast of San Diego, California, US, in 2004.

Footage of the incident was released in 2017 and showed how the tic-tac-shaped “craft” was able to pull off otherworldly manoeuvres.

Despite being grainy, the video has gone on to become one of the most widely-cited clips that conspiracy theorists use to prove the existence of UFOs.

But Jason has now said there is an even clearer video out there which shows the craft in a whole new light.

“What the video you see now is just a small snippet,” he told Dave Beaty of The Nimitz Encounters.

“You’re seeing small turns left and right but this thing is so much more than what you see in this video.