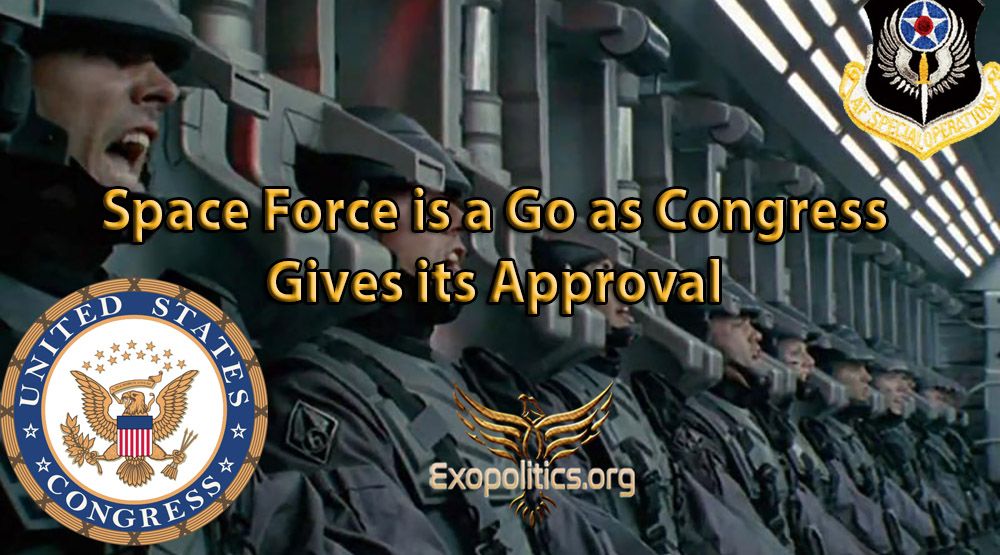 Space Force is a Go as Congress Gives its Approval

A major hurdle was passed in the creation of a United States Space Force when a Congressional conference committee comprising members of both branches of Congress, meeting to resolve conflicting congressional bills, agreed to the legislative language authorizing its creation. The “National Defense Authorization Act for Fiscal Year 2020”, contains the agreed language for Space Force’s creation, which will be voted on by both houses of Congress, and then signed by President Donald Trump.

The Secretary of the Air Force, Barbara Barrett, issued a statement after the Congressional conference committee gave its approval and said:

We certainly appreciate the hard work and bipartisan support of the Congress and the administration that is bringing a separate service for space closer to reality. We are reviewing the draft legislation and look forward to moving out smartly once legislation is passed by the Congress and signed by the President.

President Trump tweeted his approval of the agreement that had been reached and said he was ready to sign the National Defense Authorization Act (NDAA) that will formally create Space Force.

Wow! All of our priorities have made it into the final NDAA: Pay Raise for our Troops, Rebuilding our Military, Paid Parental Leave, Border Security, and Space Force! Congress – don’t delay this anymore! I will sign this historic defense legislation immediately!

The House of Representatives was scheduled to vote on the NDAA today, and will be quickly followed by the Senate before being sent to President Trump for his signature to enact it into federal law.

In the NDAA, which is nearly 3500 pages long, the agreed-upon language for Space Force appears under Title IX – Department of Defense Organization and Management.

Subtitle D discusses how Space Force will be set up and run. It asserts that the relevant sections in the NDAA (Title IX, Subtitle D) authorizing Space Force’s creation will be known in the future as the United States Space Force Act. (sec.951).

The composition of Space Force is described as follows:

(b) COMPOSITION.—The Space Force shall be composed of the following:

(1) The Chief of Space Operations.

(2) The space forces and such assets as may be organic therein.

The Chief of Space Operations (CSO) will report directly to the Air Force Secretary and one year after the passage of the Space Force Act will become a member of the Joint Chiefs of Staff.

The present head of the U.S. Space Command, General John Raymond, will also be allowed to serve as the CSO of Space Force for the first year of its operations. This will enable Raymond to oversee the smooth transition of Air Force Space Command, which he also currently heads, into the new Space Force.

The reference to “assets as may be organic therein” as part of the initial composition of Space Force is intentionally vague.  This will give Raymond broad authority to transfer assets from the Air Force into Space Force, and also transfer relevant space assets from the Navy, Army and Marine Corps. There is also another arguably more compelling reason why the assets language was left vague, as I will explain later.

The Space Act outlines the functions and duties of the Space Force as follows:

(c) FUNCTIONS.—The Space Force shall be organized, trained, and equipped to provide—

(1) freedom of operation for the United States in, from, and to space; and

(d) DUTIES.—It shall be the duty of the Space Force to—

(1) protect the interests of the United States in space;

(2) deter aggression in, from, and to space; and

The above functions and duties will give Space Force direct responsibility for protecting the civilian and military satellites that are the backbone of the Global Positioning Satellite (GPS) system that the Pentagon relies upon for its modern weapons. These have recently come under direct threat by China which has developed the antisatellite capacity to destroy all US satellites as part of its asymmetric military strategy called  “Assassin’s Mace”.

Back in 2015, General Raymond warned: “Soon every satellite in every orbit will be able to be held at risk”. More recently, in January 2018, a “Top Secret” report by the Pentagon Joint Staff intelligence directorate “revealed China and Russia have built anti-satellite missiles and other weapons and will soon be capable of damaging or destroying every US satellite in low earth orbit” [source].

The defense of the US military and civilian satellite infrastructure will be among the most important responsibilities of the Space Force for decades to come. But what space assets will Space Force use to achieve its functions and duties as outlined in the Space Act?

This is where the topic of a secret space program run by the Air Force for decades becomes relevant, and why the Space Force Act contained a vague reference to “assets as may be organic therein”. This vague reference was intentionally used so the assets belonging to the Air Force’s secret space program comprising advanced aerospace technologies using exotic propulsion systems, some of which were reverse-engineered from captured extraterrestrial spacecraft, can be ‘organically’ incorporated into Space Force.

I have previously provided photos taken of some of the classified flying triangles and rectangles operating out of MacDill Air Force Base, and how this had been orchestrated by leaders of the Air Force’s secret space program. Indeed, the photographer identified personnel from Air Force Special Operations, as part of this covert space program.

All the assets belonging to the Air Force’s secret space program will be placed under the direct authority of the incoming Chief of Space Operations, General Raymond, who will ensure these are used to protect the sensitive satellite infrastructure that China is directly threatening with its asymmetric “Assassin’s Mace” military strategy.

The official creation and launch of Space Force in 2020 will be a momentous event. It will enable the official disclosure of many advanced aerospace technologies that use exotic propulsion and energy systems based on electromagnetic principles not thought viable or possible by conventional scientists. Some of these exotic propulsion and energy systems were recently disclosed in a series of US Navy patents showing their feasibility, and how they can be applied in ways that revolutionalize the aerospace industry.

Space Force will not only open the door to the release of many highly classified technologies and the aerospace craft that have been secretly built as a result, but will also pave the way to future official disclosures about advanced subterranean civilizations and extraterrestrial life residing on, or visiting our planet.