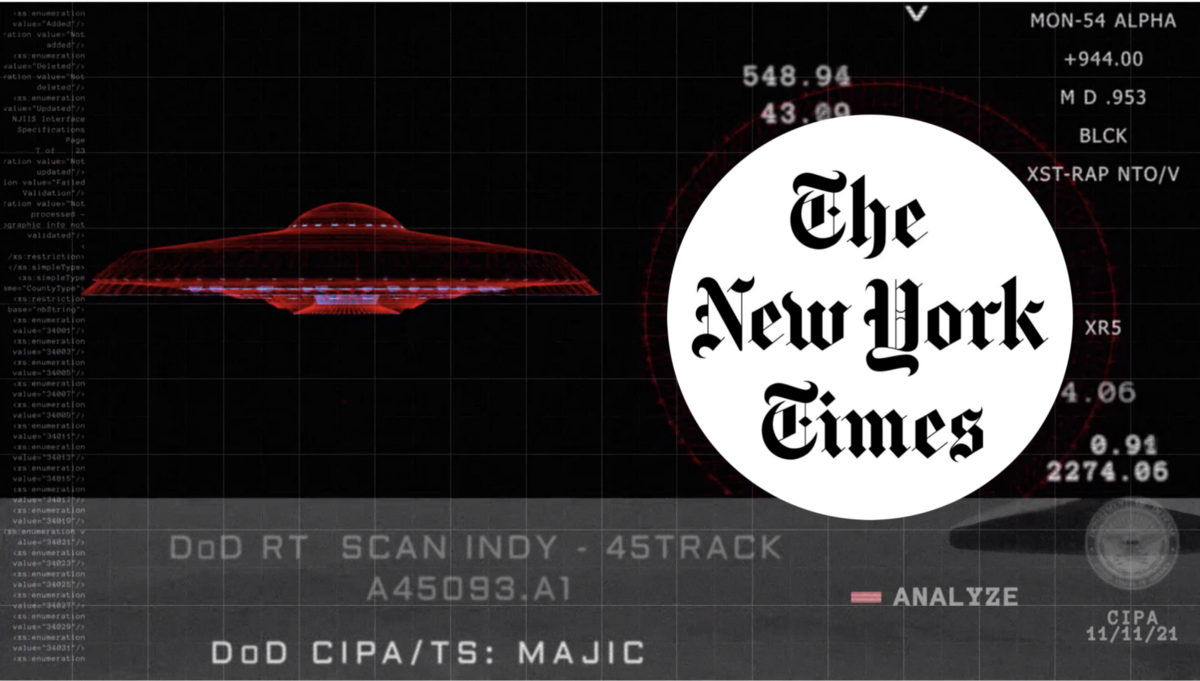 No Longer in the Shadows, Pentagon’s UFO Unit Will Make Some Findings Public

• The ‘Unidentified Aerial Phenomenon Task Force’ is a program that appears in an unclassified US Senate budget report. Its function, however, which is to research sightings of unexplained aerial vehicles (i.e.: UFOs), is classified. Operating under the Office of Naval Intelligence, the Task Force is the latest incarnation of a previous covert Defense Intelligence Agency UFO research program said to have been ‘disbanded’ in 2012. The Senate Select Committee on Intelligence has taken notice of this covert program and is requiring the Navy to reveal at least ‘some’ findings to the public as part of the proposed Intelligence Authorization Act.

• Florida Senator Marco Rubio is the acting chairman of the Senate Select Committee on Intelligence. Rubio told CBS Miami that he wanted to get to the bottom of these Navy UFO videos because there are reports of unidentified aircraft over American military bases and we need to know if China or Russia has made “some technological leap”. (see first of three short videos below)

• The former head of the previous DIA UFO research program, known as the ‘Advanced Aerospace Threat Identification Program’, Luis Elizondo is among a small group of former government officials and scientists with security clearances who say they are convinced that objects of undetermined origin have crashed on Earth and that extraterrestrial material have been retrieved for study. According to participants and unclassified briefing documents, this military UFO program has been briefing congressional committees, aerospace company executives and other government officials.

• Former Senate majority leader Harry Reid of Nevada pushed to fund the previous Pentagon UFO program in 2007. After reviewing reports from that program, Reid came to the conclusion that crashes of objects of unknown origin may have occurred, and “there were actual materials that the government and the private sector had in their possession” that should be studied. As yet, no crash artifacts have been publicly verified as being extraterrestrial in origin.

• Eric W. Davis is an astrophysicist who has worked with these government UFO programs since 2007. Although he could not offer any hard evidence of classified alien artifacts, Davis said that he had provided classified briefings to the DoD as recently as last March about retrievals of “off-world vehicles not made on this Earth.” Davis also gave classified briefings on retrievals of ‘unexplained objects’ to Senate Armed Services Committee staff and to Senate Intelligence Committee staff in October 2019.

• In a June interview, President Trump told his son Donald Jr. that he knew “very interesting” things about Roswell but demurred when asked if he would declassify any information on Roswell. “I’ll have to think about that one,” he said, coyly.

• [Editor’s Note]  Check out the three videos below. The first is a report on acting chairman of the Senate Select Committee on Intelligence, Florida Senator Marco Rubio, talking about the ‘Unidentified Aerial Phenomenon Task Force’ from ‘Rising with Krystal and Saagar’. The two and a half minute clip features footage of the three famous Navy UFO videos. The second video is a five minute clip from Fox News of Tucker Carlson talking to Leslie Kean, the NY Times article’s co-writer, on how the government is inexplicably indifferent to legitimate UFO sightings. (Can you say “cover-up”?) The third is a five minute video of Dr Michael Salla’s take on the article and Carlson’s interview with Kean. Dr Salla stresses a point made in the article that the US military and private aerospace defense contractors have been successfully reverse-engineering extraterrestrial craft for decades. This is particularly true with the US Air Force’s sizable secret space program.

Dr Salla wonders how the so-called experts in academia, media, government and the military, who have parroted the deep state’s false position that extraterrestrial UFOs simply don’t exist, are feeling now as they are confronted with the reality that they have been kept from knowing the truth all of these years, while they smugly spread their “tin foil hat” disinformation. To quote Dr Salla, “This is very important breakthrough. Millions of people are now waking up to a different reality. This has been a seismic shift.”

Despite Pentagon statements that it disbanded a once-covert program to investigate unidentified flying objects, the effort remains underway —

renamed and tucked inside the Office of Naval Intelligence, where officials continue to study mystifying encounters between military pilots and unidentified aerial vehicles.

Pentagon officials will not discuss the program, which is not classified but deals with classified matters. Yet it appeared last month in a Senate committee report outlining spending on the nation’s intelligence agencies for the coming year. The report said the program, the Unidentified Aerial Phenomenon Task Force, was “to standardize collection and reporting” on sightings of unexplained aerial vehicles, and was to report at least some of its findings to the public within 180 days after passage of the intelligence authorization act.

While retired officials involved with the effort — including Harry Reid, the former Senate majority leader — hope the program will seek evidence of vehicles from other worlds, its main focus is on discovering whether another nation, especially any potential adversary, is using breakout aviation technology that could threaten the United States.

Senator Marco Rubio, the Florida Republican who is the acting chairman of the Senate Select Committee on

Intelligence, told a CBS affiliate in Miami this month that he was primarily concerned about reports of unidentified aircraft over American military bases — and that it was in the government’s interest to find out who was responsible.

He expressed concerns that China or Russia or some other adversary had made “some technological leap” that “allows them to conduct this sort of activity.”

Mr. Rubio said some of the unidentified aerial vehicles over U.S. bases possibly exhibited technologies not in the American arsenal. But he also noted: “Maybe there is a completely, sort of, boring explanation for it. But we need to find out.”

In 2017, The New York Times disclosed the existence of a predecessor unit, called the Advanced Aerospace Threat Identification Program. Defense Department officials said at the time that the unit and its $22 million in funding had lapsed after 2012.

People working with the program, however, said it was still in operation in 2017 and beyond, statements later confirmed by the Defense Department.

The program was begun in 2007 under the Defense Intelligence Agency and was then placed within the office of the undersecretary of defense for intelligence, which remains responsible for its oversight. But its coordination with the intelligence community will be carried out by the Office of Naval Intelligence, as described in the Senate budget bill. The program never lapsed in those years, but little was disclosed about the post-2017 operations.

2:31 minute clip from ‘Krystal and Saagar’ on Marco Rubio and Navy UFOs (‘The Hill’ YouTube)