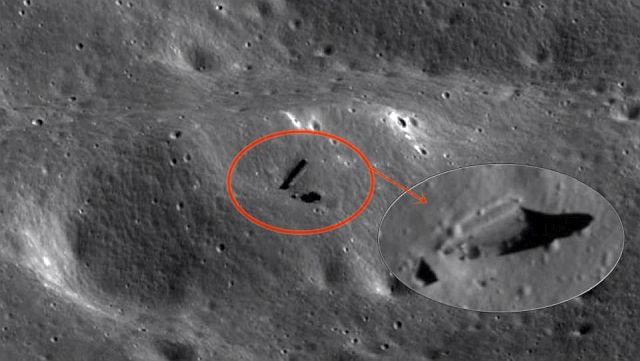 New Study: “Unusual Structures” On Far Side of the Moon Could Have Been Made by Extraterrestrials

• The Society for Planetary SETI Research (SPSR) has recently published a report claiming that structures on the far side of the moon may have been built by non-humans.

• Many sources in the past have made similar claims that artificial objects and structures exist on the Moon, including Carl Sagen.

• Mark Carlotto, an expert in digital image processing, discovered an ‘excavated’ entrance to a passageway leading underground on the moon.

• Former NATO Army intelligence analyst, Bob Dean, spoke of the government destroying 40 rolls of Apollo program film of the moon that authorities determined were ‘too socially and politically unacceptable’ for the public to see.

• Former astronaut, Edgar Mitchell, said “there is no doubt that we are being visited”, we have evidence, but it’s been covered up by governments for a long time.

• The Deputy Manager for the Clementine Mission to the Moon in 1994 said that the mission’s purpose was not to find water on the moon, but to track strange objects on the far side of the moon, which they found.

• NASA contractor, Donna Hare, reported that her ‘job’ was to airbrush UFO’s out of moon photographs before public release.

• Having top secret crypto-clearance with the USAF was told about a base on the back of the moon in 1965, including geometric shapes, towers, and radar dishes.

Contrary to popular belief, reports of artificial structures on the moon are both common and persistent. Among the first were from George Leonard’s 1976 book, Somebody Else is on the Moon, and Fred Steckling’s 1981 book, We Discovered Alien Bases on The Moon. There are many more, and from many credible sources, which we will get to later in the article.

During the early years of SETI, in 1963, even Carl Sagan spoke about the possibility of extraterrestrial visitation:

“It is not out of the question that artifacts of these visits still exist, or even that some kind of base is maintained (possibly automatically) within the solar system to provide continuity for successive expeditions. Because of weathering and the possibility of detection and interference by the inhabitants of the Earth, it would be preferable not to erect such a base on the Earth’s surface. The Moon seems one reasonable alternative. Forthcoming high resolution photographic reconnaissance of the Moon from space vehicles – particularly of the back side – might bear these possibilities in mind.”

This new study describes how they discovered seven Apollo-15 and four Lunar Reconnaissance Orbiter (LRO) images of the same enigmatic objects in the moon crater Paracelsus C, and how they differ significantly from the rocks scattered around and within the majority of craters on Luna.

Drawing from multiple images taken at different times of the lunar day, and from different sun angles, the authors point out how it’s possible to predict an approximate shape for the objects by using shape-form-shading software. This type of 3D rendering has allowed them to fly around the site in order to see how odd the objects look in their location within the south-west quadrant of the crater, which is approximately 24km in diameter. The question the scientists now ask is, are these objects artificial? If so, when were they manufactured, and by whom? They emphasize that a rover mission to Paracelsus C would probably provide some very interesting answers.

The study concludes by stating that, “Based on the evidence presented in this paper we believe this area in Paracelsus C is one such candidate that is worthy of future study by orbital missions and surface rovers. Both of the features analyzed in this area are statistically different from the surrounding terrain.”

Carl Sagan argued that deviations like these are a necessary (though insufficient) condition of intelligent activity. What’s also interesting to note about Sagan is that he was accused, by multiple colleagues, of assisting the elite with the extraterrestrial cover-up.

Another great point the authors make deals with scientific fraud, which is something we see today in all realms of research, from health to climate change. The politicization of science is a real problem in the modern day world, and the study authors point out how it is impeding efforts to learn more about outer space:

“A decidedly conservative mainstream scientific establishment often rejects anomalies based on subject matter alone, i.e., there cannot be alien artifacts on the moon because there are no alien artifacts on the moon (or other planets). Such a view is an example of circular reasoning, based on the belief that extraterrestrials do not exist, or if they do exist that they could not have traveled to our solar system.”