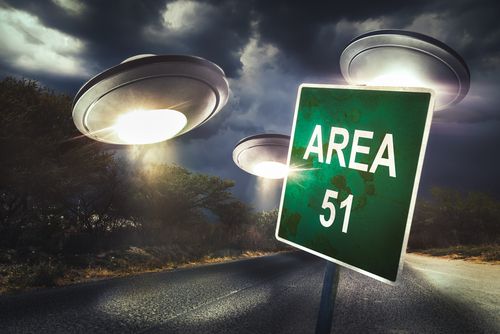 AREA 51 remains shrouded in mystery after more than six decades of secretive tests at the site.

It’s no wonder, then, that the military facility in Nevada has spawned a number of wacky conspiracy theories.

From a production site for ‘exotic weapons’ to meetings with extraterrestrials, we’ve put together some of the weirdest below.

Area 51 has long been rumoured to be America’s main base for testing captured and crashed UFOs.

At the heart of this theory is the Roswell Incident.

This was in 1947 when an occupied flying saucer was allegedly recovered from a crash site near the New Mexico town.

The UFO and its inhabitants were said to have been taken to Area 51.

The 1996 documentary Dreamland featured a 71-year-old mechanical engineer who claimed he worked on a flying disc simulator used to train US pilots.

It was based on a crashed extraterrestrial flying saucer, according to the film.

But others who have worked there say testing of captured aircraft was restricted to Soviet-built MiG fighters.

Rumours increased when the base was used to test Oxcart, the code name for the CIA-ordered Lockheed A-12 reconnaissance plane.

Annie Jacobsen, author of the book Area 51: An Uncensored History Of America’s Top Secret Military Base, explains: “The shape of Oxcart was unprecedented, with its wide disc-like fuselage designed to carry vast quantities of fuel.

“Commercial pilots cruising over Nevada at dusk would look up and see the bottom of Oxcart whizz by at 2,000-plus mph.

“The aircraft’s titanium body, moving as fast as a bullet, would reflect the sun’s rays in a way that could make anyone think: ‘UFO!'”

Dissections of dead aliens and interrogations of living ones are also said to have been carried out at Area 51.

There is, however, no evidence to support this claim.

Huge areas of the US suffer water shortages.

There are frequent disputes between farmers, ranchers and householders over access to water for irrigation, animals and domestic uses such as filling swimming pools and watering lawns.

Meteorologists at Area 51 are thought to have experimented with cloud seeding, where chemicals are dropped into clouds from planes to try to make them produce rain.

A separate section is said to have tried producing hurricanes and storms that could be directed at enemy countries.