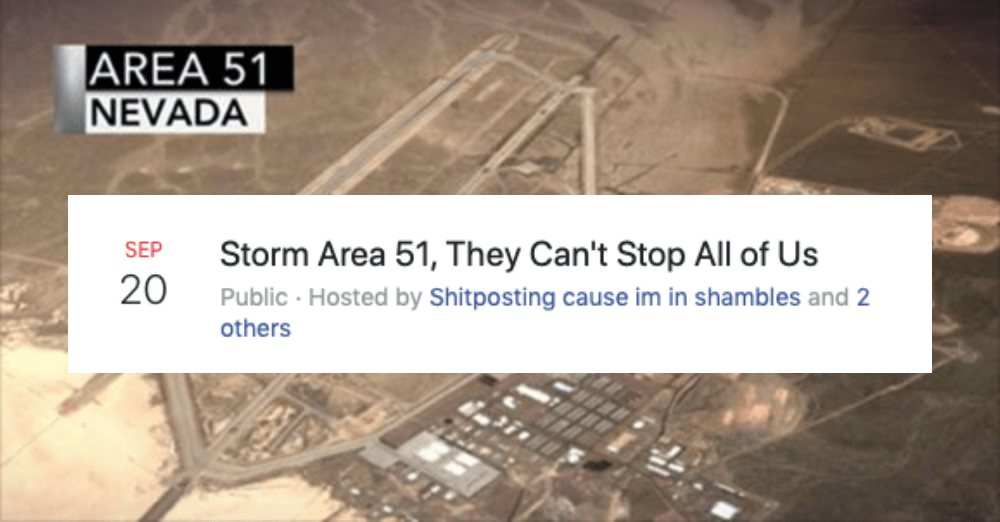 “Let’s See Them Aliens”: The Comic Futility of #StormArea51

• Believing in aliens used to automatically catapult a person into kook territory, but things have changed. Prominent public figures are treating the UFO and extraterrestrial phenomenon seriously, from Harvard astrophysicist Avi Loeb, to aerospace billionaire Robert Bigelow, to the New York Times, to members of Congress demanding briefings. All of this has lent credence to a Facebook event called “Storm Area 51, They Can’t Stop All of Us.” (see previous ExoArticle) Well over a million Facebook users have pledged to show up at a Nevada tourist spot, to invade en masse the secret military base known as ‘Area 51’ at 3 am, September 20th.

• A similar online phenomenon happened in 2017 as Hurricane Irma approached the Florida coastline. Ryon Edwards created a Facebook event called “Shoot at Hurricane Irma.” Over 80,000 people responded with interest in attacking the hurricane, though no one did. It was a way to diffuse a frightening situation with a lighthearted meme.

• Like the Irma event, this is an obvious stunt. The post reads: “If we naruto run (like an animated video game character), we can move faster than their bullets.” And the Facebook page itself is called “Shitposting cause im in shambles”. Many attendees responded tongue-in-cheek: “I only RSVP’d for the memes” and “Let’s see them aliens.”

• Samantha Travis, the manager of the Little A’Le’Inn tourist spot where the invaders are scheduled to convene, said people have been calling “nonstop, all day,” and all of their rooms are booked. University student, Jackson Weimer, imagines that it will turn into a big party. Travis noted that there is plenty of available campground space.

• While the vast majority of participants are openly kidding around and not seriously planning to attack a military base, the military itself appears to be treating this as a matter of real concern. An Air Force spokesperson told the Washington Post that it is “ready to protect America and its assets.”

• There’s a good chance “Storm Area 51” will be a distant memory by the time September 20th actually rolls around. In the same way that people took a moment to laugh at the concept of attacking a hurricane, the punch line to “Storm Area 51” is how cartoonishly futile life can feel. It is the sort of joke that can puncture the terrors of climate change and evil governments. The popularity of “Storm Area 51” reflects a larger mood of low-grade fatalism and hyperbolic violence that is percolating online this summer.

Over a million people have RSVP’d to an event on Facebook called “Storm Area 51, They Can’t Stop All of Us.” The military has warned people to stay away. It’s just a gag—but one particularly well-suited to this summer.

In 2017, as Hurricane Irma twirled menacingly toward the Florida coastline, a young Floridian named Ryon Edwards coped with storm-related anxiety in a very modern way. He logged onto Facebook and created an event called “Shoot at Hurricane Irma.” Over 80,000 people responded that they were interested in staging an attack on the “GOOFY LOOKING WINDY HEADASS NAMED IRMA.” No one ever opened fire on Irma; at least, there is no documentation of such an event. The Facebook post was a joke, a way to diffuse a frightening situation with a lighthearted meme. Despite some hand-wringing by local authorities, it wasn’t actually worth fretting over.

In recent days, a similarly playful Facebook event has reached an even greater height of popularity. “Storm Area 51, They Can’t Stop All of Us,” an event scheduled for 3 a.m. on September 20 at the famously mysterious Nevada military base, has racked up over 1.4 million RSVPs over the past week, with more than a million other people expressing interest in storming Area 51 en masse. “We will all meet up at the Area 51 Alien Center tourist attraction and coordinate our entry. If we naruto run, we can move faster than their bullets,” the post reads. (“Naruto” is a reference to Naruto Uzumaki, an anime character who runs with an awkward stride.) “Lets see them aliens.”

Like the Irma event, it’s an obvious stunt. The viral appeal is equally obvious, as it is fun to imagine a ragtag group of strangers liberating Martians from one of the most notoriously locked-down places in the country, like the plot of a pleasantly stupid action movie.

“Honestly I only RSVP’d for the memes,” one event attendee told me via Facebook Messenger. A Discord chat room created to “strategize” about the attack is filled with memes about adopting aliens and chatter about role-playing. “I think we need a division of vapers. To make an escape cloud,” one participant suggested. “I don’t think no one is going to this,” another said. When I identified myself as a journalist and asked people on the event page whether they’d speak with me, I was repeatedly called a “Fed”—exactly what I deserved for posting on an event page co-created by an account called “Shitposting cause im in shambles.”

But for all the jokes, the event has sparked real-world uptick in interest in traveling to the Area 51 region. People have been calling the local hotel and bar Little A’Le’Inn, for instance, “nonstop, all day,” manager Samantha Travis told The Ringer. “Our rooms have been booked for a few days now.” (Travis noted that the area does have plenty of available campground space.) “I think that people actually might go and have a party,” Jackson Weimer, a University of Delaware student who runs a popular meme account and accepted that I was not a cop, told me. “Some idiots will probably take it too far and try and rush the base but I hope everyone is smart enough to realize when a meme is a meme.” While the vast majority of participants are openly kidding around and not seriously planning to attack a military base, the military itself appears to be treating this as a matter of concern. An Air Force spokesperson told the Washington Post that it is “ready to protect America and its assets.” (The Air Force did not respond to The Ringer’s request for comment.)