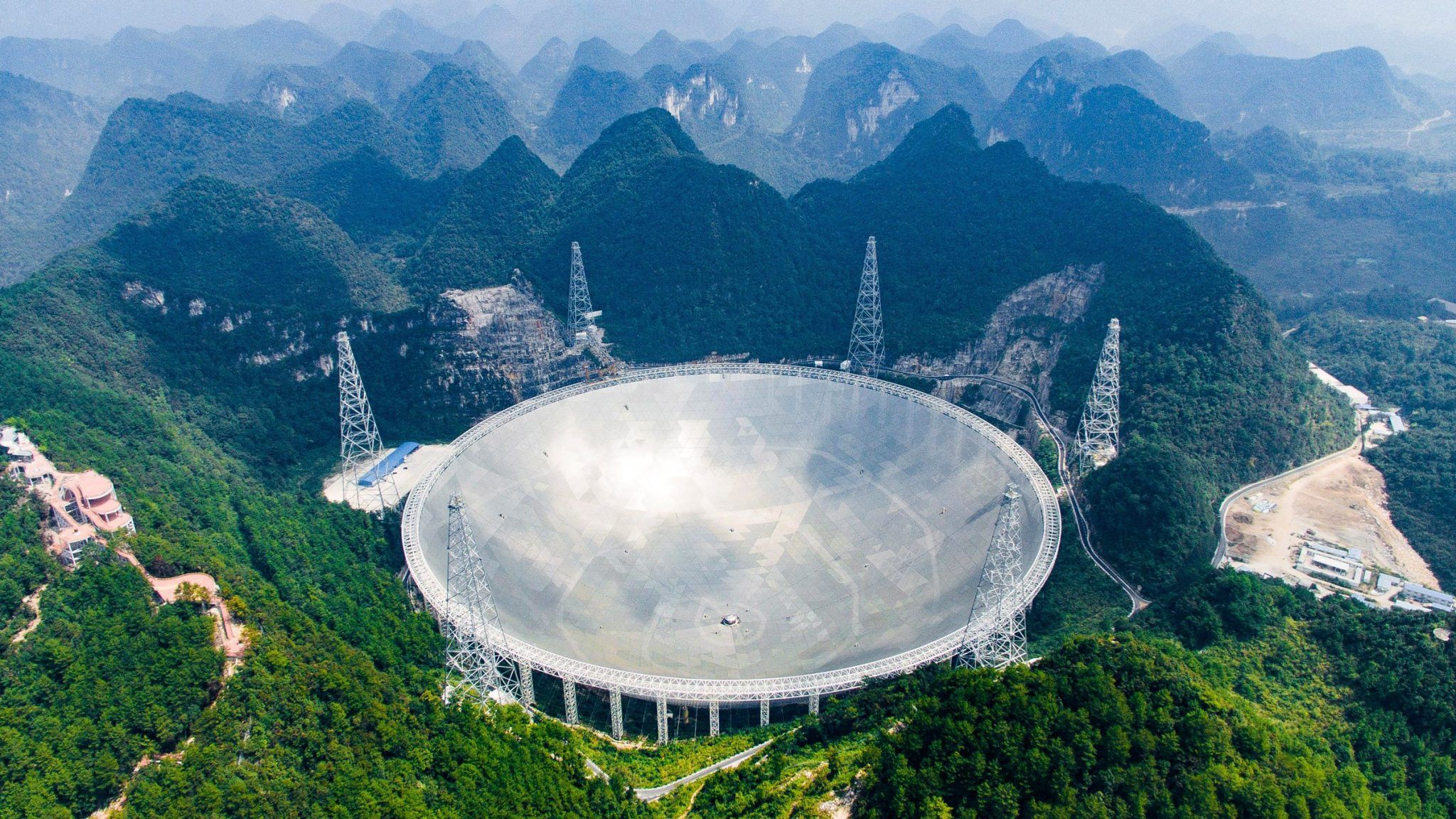 • After more than three years of testing, the world’s largest single-dish radio telescope—the Five Hundred-Meter Aperture Spherical Telescope, or “FAST” in southern China (pictured above) – is about to become operational. Chinese officials claim that FAST is already three times as sensitive as the Arecibo observatory in Puerto Rico, the second-largest single-dish telescope in the world.

• While the FAST trials have focused on detecting neutron stars, one of the goals during the telescope’s operational lifetime will be to search for signals from intelligent extraterrestrials. Do they exist? Are they bound by a non-interference ‘prime directive’? Many claim that UFOs and alien visitation has been covered up by the government, such as the 1947 Roswell UFO crash. Of course, this was only a high altitude balloon used by the U.S. Air Force for Project Mogul.

• In fact, 99 percent of all UFO reports can be easily explained as natural atmospheric phenomena like sprites – which produce dancing flashes of bright light when lightning is exciting the electrical field above a storm. Scientists focus their investigations on the one percent of UFO events that are stubbornly difficult to explain – not that the investigators have any evidence of aliens. But any scientific investigation has to be based on experiments and reproducibility. And when it comes to alien visitations, those standards can be difficult or impossible to apply.

• Considering that we still have no answer for the Great Silence of the elusive aliens, we have to leave open the possibility that aliens have been visiting Earth. From a practical standpoint, science may be better suited to analyzing alien artifacts or possible alien objects in space, such as the interstellar asteroid ʻOumuamua’. As our observatories improve, and better telescopes like FAST come online, we may find ourselves with many more such mysteries to solve.

• [Editor’s Note]   Wow. This writer has guzzled so much of the deep state’s kool aid, he is completely mind controlled and devoid of independent thought. He accepts without question that the Roswell crash was a weather balloon. He believes that 99 percent of all UFO sightings are mere atmospheric phenomenon. It is hard to take anyone with such cognitive dissonance seriously. Hopefully, Chinese astronomers won’t be as hampered by deep state propaganda as are the hapless scientists in America. Humanity will welcome the truth for a change, regardless of where it comes from.

The world’s largest single-dish radio telescope—the Five Hundred-Meter Aperture Spherical Telescope (FAST) in southern China—is about to start operation after more than three years of testing and commissioning. While the trials have focused on detecting neutron stars, one of the goals during the telescope’s operational lifetime will be to search for signals generated by intelligent extraterrestrials. Since Chinese officials claim that FAST is already three times as sensitive as the Arecibo observatory in Puerto Rico, the second-largest single-dish telescope in the world, we surely expect new discoveries.

We don’t know, of course, whether the giant telescope will detect signs of extraterrestrial technology. But we’d love to have an explanation for what’s been called the Great Silence, also known as the Fermi Paradox: If there is intelligent life out there, why don’t we see any evidence of it?
There are many possible answers, including the idea that we live in a kind of designated nature preserve, or zoo. Or, if you like Star Trek, maybe the aliens are applying their version of the prime directive and trying not to interfere with life on Earth.

When I was in New Mexico recently for a workshop on extant life on Mars, I also visited the International UFO Museum and Research Center in Roswell. While the museum did have some interesting exhibits, including artwork and depictions of aliens in science fiction movies, its focus on the famous 1947 Roswell UFO incident seemed to suggest a government cover-up of an alien visitation. Never mind that the Roswell event likely has a much more mundane explanation: the crash of a high altitude balloon like the ones used by the U.S. Air Force for Project Mogul.