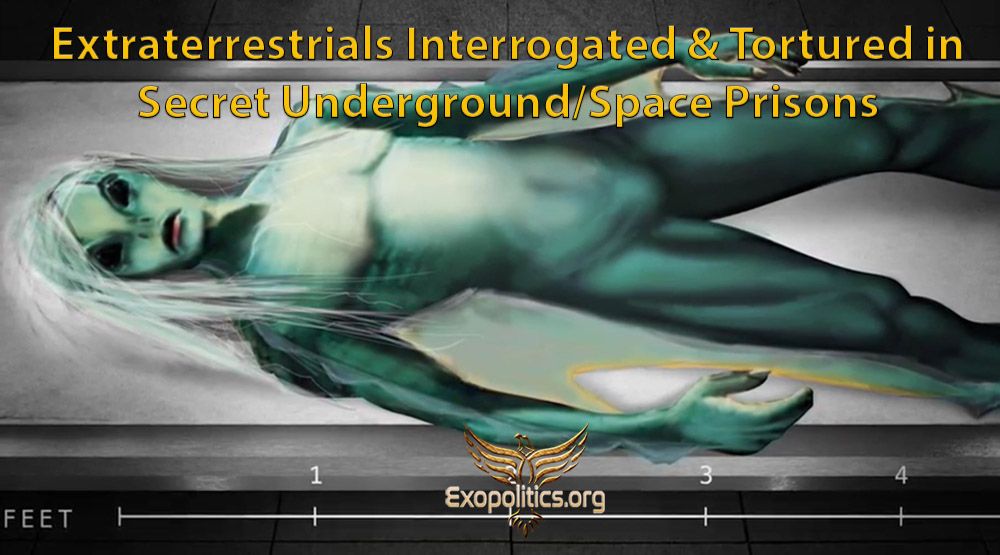 In another bombshell interview on the Cosmic Disclosure Gaia TV series, insiders Emery Smith and Corey Goode have revealed their direct knowledge and participation in classified programs that involved the detention, interrogation, torture and dissection of human looking extraterrestrials. Their stunning eyewitness accounts provide powerful evidence that atrocities have been occurring in classified programs against extraterrestrial visitors who are almost indistinguishable from modern humans.

The program host, David Wilcock, began by asking Goode to explain what the “Intruder Intercept and Interrogate Program” was all about.

It’s a program that is similar in part to the Men in Black. What this Intercept and Interrogate Program does is that if an intruder flies into our [solar] system, doesn’t give a friend or foe signal and is intercepted, they are taken from their ship. Or, what happens in most cases is that ETs have made it to the Earth and are here secretly blending in as one of us.

This group also acted as a police force for non-terrestrial groups that are here with permission. They helped keep them apart, and when they (ETs) had issues they acted just like police.

After describing the extraterrestrials, who were very human looking and could easily blend in to human society, Smith described encountering some of them in autopsies he was conducting for classified programs at Kirtland Air Force base and other facilities around the country.  He emphasized that they had showed obvious signs of torture:

Emery: … Some of the extraterrestrials that we were working on in the lab, doing dissections and what not, some of these full bodied human extraterrestrials would come in  and they would be very badly beaten where subdural hematomas, are being beaten in the back of the head. It looks like they were tortured, sometimes many broken bones.

I didn’t find out until later on that these beings were coming from a prison or a withholding cell of some sort and were being interrogated…. After hearing your [Corey’s] testimony, this is what we were receiving. Because usually they are in pretty good shape unless they were shot down or something. These were obviously, been beaten to death.

Corey: … A lot of the times the individuals that were being interrogated just died of stress and trauma … from the process. It was very disturbing. They were tagged and sent for study afterwards.

Emery: We had a few that they actually starved to death. I’m not sure what happened….

Corey: There are prisons that they have for them. Some of them, where they bring them like a conventional prison. That’s where they need to further interrogate them for a while get more information or have them to trade off or to tip us off.

After Goode and Smith’s mutual corroboration of human looking extraterrestrials being tortured at special prisons, some of which were in off planet locations, Goode went on to discuss how many extraterrestrials would end up at a cryogenic chamber on the Moon:

Fairly recently I was given an extensive viewing and tour of the Lunar Operations Command. It connected to two other commands. Lunar Operations Command they call LOC Alpha, and below ground in these lava tubes are two more called LOC Bravo and Charlie, and LOC Charlie has a research facility that is cryogenics, and one of the floors of that is a storage facility for some of these beings that they put into stasis

Emery: Right, there’s a huge one of those where I worked [Kirtland AFB], a large cryomorgue, where these are kept in the hundreds, before they go into the lab. There’s always enough bodies and there’s always enough specimens, it’s like an unlimited amount. It’s like they can’t keep with it, there’s just so many going on. Hundreds of these rooms that I’ve worked in.

In response to a question, Goode explained how newly captured extraterrestrials are treated depending on whether they are cooperative or not:

What happens in an interrogation? If they are cooperative, if they say I’m  here. I have a small support team that’s cloaked outside Jupiter, for example, please contact them, verify. In many cases we would hand them back over to their support group, give them a slap on the hand and say this is the process if you come in, legally I guess you can say.

Now the ones they want to further question they would keep in prisons, out of stasis, just like a normal prison. Some of these prisons were ships … Some of the asteroids that we had mined, then we ended up going in and creating partial cryo-prisons but mostly just regular type prisons. So there’s a number of ways they keep these beings locked down.

Responding to another question from Wilcock as to whether any public figures are extraterrestrials, Goode and Smith gave the following answers:

Corey: I was told back when I was in this program they ae limited in how they interact with Society. Everything has to be preapproved. They can work in our companies and that kind of thing, but they can’t hold places [positions] of power. That’s for the ones that are coming here on an internship.

Emery: Absolutely, they are not allowed to have any influential positions. I would know. I would know right now for sure if someone of great power was an extraterrestrial, and they are not doing that to us. Maybe in the future they well, they have to step in and save the planet and save us, but right now there is nothing like that going on.  And the corruption shows that, around the world. They do, they have specific rules, like Corey said, that they cannot do certain things here.

Goode explained that the majority of the beings detained in the Intruder Intercept and Interrogate program were human looking extraterrestrials, and the non-human ETs were handed off to Draco Reptilians for processing:

Most of them were human, they just looked human, various types of humans. About 10%, may 15%, were the types you hear described as aliens, very strange looking, evolved in a completely different environment. We  had Insectoids, we had different types of Reptilian beings, which we immediately turned over to the Draco. The insectoids, there was a certain type of insectoid, certain group, that was always turned over… There were a number of amphibians.

Goode and Smith’s information about different types of extraterrestrials that have infiltrated Earth being monitored by a secret agency set up exclusively for that purpose, echoes what Dmitry Medvedev, the current Prime Minister of Russia, said about the existence of such an agency in December 2012:

Along with the briefcase with nuclear codes, the president of the country is given a special ‘top secret’ folder. This folder in its entirety contains information about aliens who visited our planet… Along with this, you are given a report of the absolutely secret special service that exercises control over aliens on the territory of our country…

Goode and Smith are not the first to claim that human looking extraterrestrials are being secretly detained, interrogated, tortured and killed in classified programs run by a mysterious quasi-governmental agency that operates over the entire planet.

One of the first references to this occurring was from researcher Frank Crawford who published his findings in the Spring 1991 edition of UFO Journal of Facts. He described the detention and torture of an alleged being from the Tau Ceti star system based on an interview with a military witness who served with the US Navy at the time, and who used the pseudonym, “Oscar”.

The Tau Cetian/extraterrestrial was given the nickname “Hank” by Oscar who was assigned to a crash retrieval operation that occurred in 1961 where he found the injured Hank in his damaged spacecraft, and eventually confided the following story, as told by Crawford:

As Oscar told the story that began this article it became obvious that, because of his military background, the name given was for his protection. The account unfolded further to reveal horrible injustices to Hank and to Oscar himself. At the direction of [Frank] Drake the team conducted medical experiments such as spinal taps, marrow sampling, taking organ specimens and other exploratory surgery on Hank WITHOUT anesthesia. Oscar had spent many hours over three months communicating with and growing close to the alien.

One day he stepped between Drake and Hank with his .45 cal. pistol drawn and demanded an end to the torture. Drake withdrew but the next morning Oscar had new orders to depart immediately for Saint Albans Hospital in Radford, Va., where he was incarcerated for debriefing…. After spending time under psychiatric care, which would damage his military record, he was oddly enough given an honorable discharge.

After having returned to civilian life he and his father embarked on a hiking trip to North Dakota. They purposely entered the restricted area surrounding the base where Oscar had been stationed. Perimeter patrol picked them up for removal from the area. While in their company Oscar asked how Hank was doing. One of the guards confided that the alien had died several months earlier.

Circumstantial support for the above story is that in 1960, Drake headed the OZMA program, which scrutinized radio frequencies from different star systems for any sign of extraterrestrial life. OZMA, was the precursor to the SETI program, and in April 1960 began searching for possible extraterrestrial radio signals from the stars Tau Ceti and Epsilon Eridani. It’s feasible that the subsequent 1961 crash by Hank’s craft was related in some way to Project Ozma’s interest in Tau Ceti, which is similar in age to Earth’s sun.

In addition, there are many stories of human looking extraterrestrials that have blended in with humanity, and have been under some form of official surveillance. Famed psychic Ingo Swann describes his encounter with a female extraterrestrial who was being monitored by two CIA agents working in a covert alien surveillance program which had previously employed Swann. His story and others are covered in my 2006 article, “Extraterrestrials Among Us”, and in greater detail in my 2013 book, Galactic Diplomacy.

It’s important to emphasize that both Smith and Goode were participants in classified programs that have conducted gross abuses of extraterrestrial visitors, and have courageously gone on the public record about these events. Smith in particular has provided documentation confirming his military service at Kirtland Air Force Base, which is one of the locations where the abuses occurred. Smith and Goode’s eyewitness testimonies is compelling testimonial evidence that is admissible in a court of law or Congressional inquiry, and therefore deserve serious investigation.

Based on their and other witness testimonies, the detention, interrogation, torture and death of human looking extraterrestrials in secret prisons in classified underground facilities, on the Moon and elsewhere, date as far back as the 1960’s if not earlier. Clearly, such an outrage needs to be exposed and immediately stopped, since there is no evidence that the visitors pose any genuine threat to humanity – other than exposing the decades long cover up of extraterrestrial life.