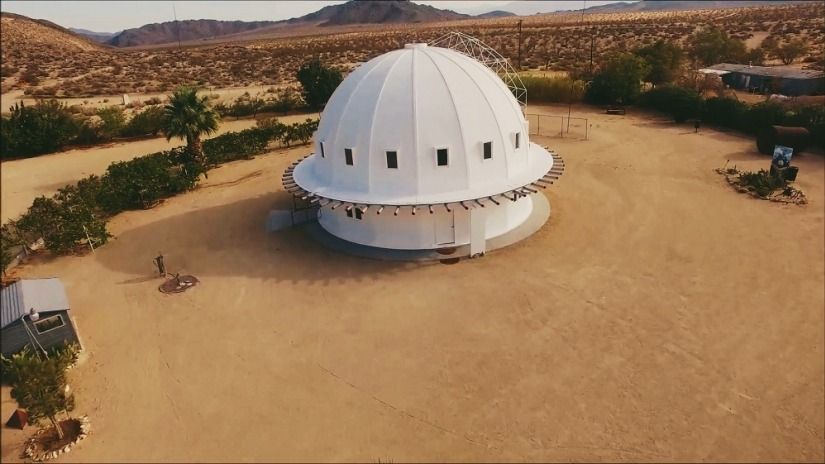 “Calling All Earthlings” Changes The Course of Time

• Calling All Earthlings, a documentary film on the life of UFO/ET experiencer, George Van Tassel, opened August 1st at the Maysles Documentary Center in Harlem, New York City. Van Tassel was a former aircraft mechanic who opened a small airport and cafe in the desert town of Landers, California, adjacent to a “Big Rock” considered sacred by Native Americans. In the documentary, social scientists and futurists Dr. J.J. Hurtak and his wife Dr. Desiree Hurtak give running commentary, and a medium channels Van Tassel’s spirit.

• On August 24, 1953, Van Tassel was awakened by a man from Venus named Solganda who looked human and spoke English. The man gave Van Tassel blueprints for a wooden dome that spins and creates a powerful electromagnetic field which creates anti-gravity and time travel, and promotes human health through cellular rejuvenation. Van Tassel also incorporated the writings of Nikola Tesla to come up with the structure known as “The Integratron” (shown above). Made without nails or screws that could with the machine’s conductive properties, the structure is ringed by a rotating wheel of metal spikes. He chose the site in the Mojave Desert north of Joshua Tree National Park for the structure because of its proximity to magnetic vortices and its relationship to the Great Pyramids in Giza. Mostly paid for by Howard Hughes, it took Van Tassel 18 years to build The Integratron.

• The FBI considered Van Tassel a “mental case,” according to declassified files used in the documentary, and scoffed at the belief that communication with extraterrestrials was possible. But the agency also wondered whether the annual Giant Rock Interplanetary Spacecraft Convention, which Van Tassel hosted for over 20 years, was a commie front.

• Van Tassel died mysteriously in 1978, and his papers thereafter disappeared.

Mystery, murder and meditation meet aliens, federal agents and time travel in Calling All Earthlings. The documentary follows George Van Tassel, who mixed alien intelligence with the writings of inventor Nikola Tesla to come up with The Integratron, a time machine powered by electromagnetic energy. The documentary opens with a collage of witnesses testifying to strange lights, craft, and creatures with glowing red eyes, and then gets weird.

Tassel was far ahead of his time, both technologically and socially. He started at spiritual UFO cult which was stalked by busybodies worried about chants of love, peace and prosperity, while the FBI worked to infiltrate and influence the Integratron intelligentsia against their communistic ideas about free energy. Jack Parsons, the black magic rocket scientist who worked with the Great Beast Aleister Crowley and L. Ron Hubbard, explored free love as part of rocketry’s Suicide Club. But offering free energy proves more dangerous than a Babalon Working for Tassel.

Tassel was a former aircraft mechanic and inspector. He opened a small airport and cafe in the desert town of Landers, California, where some good smoke was being puffed, according to one of the locals interviewed. He set up shop next to a big rock considered sacred by Native Americans.

Tassel began the communication that led to the basic blueprints for the machine on August 24, 1953, when he was woken up by a man named Solganda who looked human and spoke English. The man from Venus gave Tassel plans for a dome that spins and creates a powerful electromagnetic field which promotes cellular rejuvenation allowing Van Tassel to grow old and wise enough to save humanity.

“Dedicated to Research in Life Extension,” the Integratron built as a “a time machine for basic research on rejuvenation, anti-gravity, and time travel.” The site in the Mojave Desert was chosen because of its proximity to magnetic vortices and its relationship to the Great Pyramids in Giza. The 21st century version of Moses’ Tabernacle is held down by a donut of cement that forms a small oculus at the apex of the dome. The structure is ringed by a rotating wheel of metal spikes. The two-story wooden building was metal-free. There were no nails or screws used because they could have interfered with the machine’s conductive properties. He also inadvertently invented Ikea.

It took Tassel 18 years to build the dome about 20 miles north of Joshua Tree National Park. The work was paid for by covert payments from legendary recluse Howard Hughes, members of Van Tassel’s Ministry of Universal Wisdom, Inc., and revenue from an annual Interplanetary Spacecraft Convention.