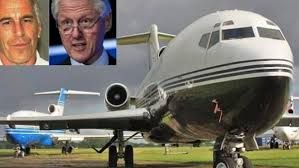 Did Epstein’s Plane Recently Fly To An Elite Secret Base In Antarctica?

Here in beautiful British Columbia, it is difficult to fathom the extent of the filth surrounding our current political situation, especially in the US with the Epstein scandal following close on the heals of Russiagate with which it is closely related.Of course, Canada is not free from its own problems with Prime Minister Justin Trudeau under fire for his role in the SNC-Lavalin probe.

Problems abound globally whether in Kashmir, Venezuela, Ukraine or Hong
Kong.  The potential silver lining in this mess is for a resetting of the financial architecture to reconstruct post WWII Bretton Woods arrangements that more accurately reflect current realities.

Now comes another incredible slice of the Epstein saga that upgrades the
conversation from the tawdry world of spying, sex trafficking, secret arms
deals, the funding of transhumanist research at Harvard and the other myriad
intriguing links to this modern day twisted version of James Bond.

Yes, Antarctica of all places, with its connections to Nazi bases, Project
Highjump and its mysterious visits by religious figures, government officials and one Moon Walker, Buzz Aldrin.

Is there a secret elite base in Antarctica?  Does it have any connection to the Secret Space Program?  And why is a plane directly linked to Jeffrey Epstein going there while he was in jail awaiting trial……or should I say execution?

Epstein was some sort of deviant character.  But his unique life style and
incredible connections to all sorts of powerful people will likely see him
become a larger-than-life anti-hero like Che Guevera or Charles Manson.

With this latest revelation of a claimed link to one of the most remote regions  on Earth, another chapter is unfolding that may take us to places and entities far beyond our wildest imagination.