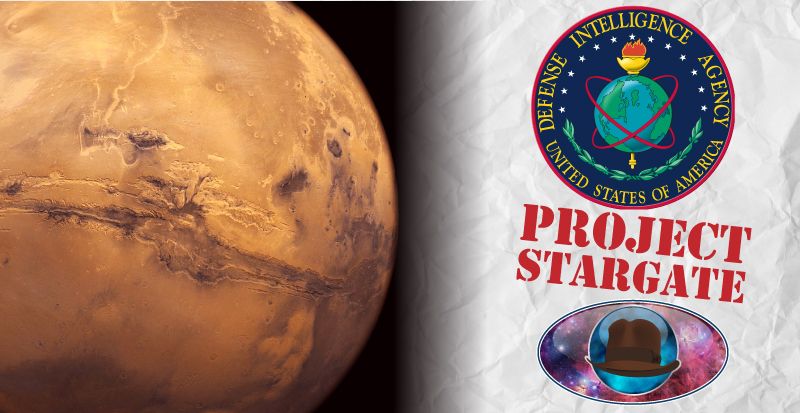 Did CIA Hire a Psychic to ‘Remote View’ Aliens on Mars?

• In 1984, the CIA hired an anonymous psychic to conduct a ‘remote viewing’ task to find signs of life on Mars as part of the CIA’s ‘Project Stargate’. This psychic had the ability to remote view Mars while remaining physically on the Earth. In 2017, the CIA released records from the project online.

• Project Stargate was a $20 million classified mission carried out by the US Army with the help of psychics and paranormal investigators.

• The remote viewing psychic claimed to have indeed seen aliens on Mars. He described them as: “… very tall, very large people but they’re very thin. They look thin because of their height and they dress like in, oh hell, it’s like a real light silk, but it’s not flowing type clothing, it’s like cut to fit.” He also claimed to have seen pyramids and building-like structures on Mars.

• The psychic revealed that the aliens on Mars are dying out due to environmental changes, and they are now trying hard to survive. Nick Redfern wrote a book on the declassified CIA ‘Project Stargate’ file, in which he determined that Mars was once a hospitable world with its own civilization. But something disastrous has happened on Mars, resulting in the extinction of most of life on the Red Planet. “When we put together the many and varied anomalies that have been photographed on the surface of the planet – such as the Face on Mars, the ancient pyramids, and even strange lifeforms such as the “Face-Hugger” creature – it’s clear to me that life existed on Mars,” said Redfern. Redfern suggested that aliens could be still living on Mars, and that space agencies like NASA should send a manned mission to there to uncover these mysteries.

• Chief NASA scientist Dr. Jim Green has predicted that alien life could be discovered on Mars in 2021. But Green believes that Earth humans are not ready to accept the realities surrounding an extraterrestrial existence.

Several space scientists strongly believe that life is not confined to earth, as there could be alien life forms in the deep nooks of the universe thriving in other space bodies. Believing this assumption, the CIA had once hired an anonymous psychic to discover aliens that might be living on Mars.

According to a report published in the Sun, this psychic allegedly had remote viewing capability, and it helped him to

view the surface of Mars while being on earth. The seemingly creepy experiment took place in 1984 as a part of Project Stargate, a confidential mission carried out by the US Army with the help of psychics and paranormal investigators.

This secretive project cost $20 million, and in 2017, the CIA released records from the project online. It was British investigator Nick Redfern who uncovered CIA’s experiment to discover an alien civilization on the Red Planet.

“Ah very tall, very large people but they’re very thin. They look thin because of their height and they dress like in, oh hell, it’s like a real light silk, but it’s not flowing type clothing, it’s like cut to fit,” said the psychic, The Sun reports.