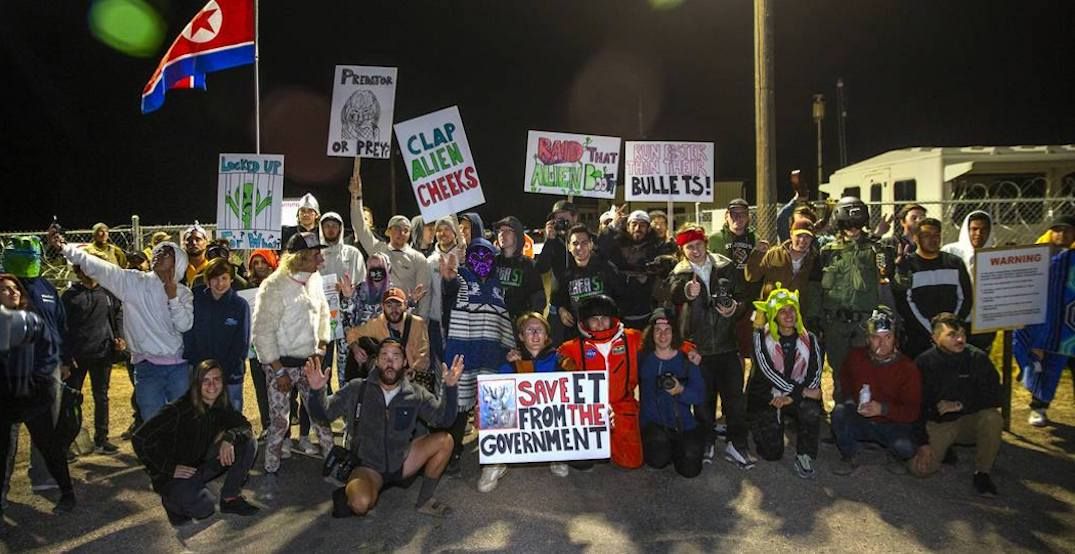 • September 20th marked the first anniversary of the ‘Storm Area 51’ Facebook event when over two million people responded to a college student’s ‘late-night goof’, and pledged to storm Area 51 to “see them aliens.” Leading up to the event, the world was obsessed with how many people would descend on a tiny town called Rachel, Nevada – 50 miles from anywhere – and what they’d do when they got there.

• The event was thrown into disarray just days before when the young man who coined the phrase “Storm Area 51” severed ties with it. Plans to “storm” the nearby gate at the secretive military facility morphed into a music and arts festival dubbed ‘Alienstock’ for the 2000 or so people who were curious enough to show up.

• As the proprietor of the only business in Rachel, Connie West and her Little A’Le’Inn restaurant and hotel were thrust into the international spotlight. “I’m still not unwound from it,” West says of that wild summer that found media from around the world wandering into her small cafe, “because I have to deal with the aftermath of it every day.” “In this last year (with COVID), we’ve been hit so hard, we’re barely treading water.”

• As a result of this random Facebook meme, Lincoln County, Nevada is out $200,000; two small-business owners lost a combined $250,000; litigation involving the meme’s creator is pending; and Rachel has become divided, with many of its residents no longer speaking to one another. “I’ve known these people for a long, long time,” said West. “Alienstock made me see some ugly in people that I never thought were that deep and ugly, right here in my community.” West estimates the event cost her $200,000, and that tab keeps climbing because of the legal bills. She’s due in court again in late February.

• None of that deterred West from attempting to host another festival in 2020, which was canceled due to the pandemic. “I put a hell of a lot of work into it,” said West. “I had some awesome sponsors.” Those sponsors seem willing to work with her again when it is deemed safe, in 2021 or 2022. “All year, people have reached out to me,” West says. “They want this to happen again.”

• Rachel resident Joerg Arnu says that “The event… deeply divided our town into two camps.” One group backs West and her plans. Arnu leads the other group who wishes that West would just throw in the towel. “There’s a lot of animosity all of a sudden,” says Arnu. “Rachel was a very friendly town, where everybody knew everybody, everybody greeted everybody, waved at everybody. Now it’s come down to the exact opposite. Nobody even wants to talk to anyone anymore.”

• Since the Alienstock festival, Arnu says he’s been harassed, had strangers trespass on his property and has been photographed inside his home via long lenses. He complains of tourists driving through the residential areas of Rachel, and he has reinstalled the security lighting he bought last summer. “Our town that was a very peaceful and quiet place, and friendly place, has changed. I don’t know if it will ever mend, if it will ever go back to how it was,” says Arnu. “I will fight another Alienstock with everything I have.”

• Aside from the town of Rachel, the ‘Area 51 Basecamp’ at the Alien Research Center in Hiko, Nevada also had grand ambitions. British DJ Paul Oakenfold was so excited about the event that he flew from England on his private jet to perform for free on opening night at the center. But so few festival-goers showed up, plans were scrapped and tickets were refunded.

• “I don’t think we have anything to be embarrassed about,” says George Harris, the owner of the Alien Research Center. “And, by the way, I lost a lot of money, because I really thought there was going to be about 25,000 or 30,000 people, so we prepared for a lot.” Instead, 8,500 people stopped by over the course of a couple of days. That discrepancy cost him $42,000, and Harris says it will take him four or five years to pay off the bank loan. But the Alien Research Center was busier than normal for the next several weeks, and Harris says visitors still can’t get enough of his “I Stormed Area 51” merchandise. Like West, he plans to do it again.

• Eric Holt had been Lincoln County’s emergency manager for 18 months when calls started pouring in about ‘Storm Area 51’. A predicted number of 100,000 people coming to Lincoln County was a logistical nightmare in a rugged environment with almost no infrastructure. “We spent a month and a half straight just dedicating all of our resources to planning efforts for this,” Holt recalls. Even the 6,000 people who showed up for the event was “still kind of unheard of for up here” where there are only about fifty permanent residents. Holt says the county’s final costs for that weekend topped $200,000, and that was only because several other agencies offered their services at no charge. “[I]t would have been over $1 million easy.” Holt says that, between the event and the pandemic, it could take years for the full economic impact to be felt. Nevada Governor Steve Sisolak has indicated that help from Carson City isn’t likely.

• The idea to storm Area 51 at 3 a.m. Sept. 20 was born out of late-night boredom as the 20 year old college student Matty Roberts played World of Warcraft while scrolling through Facebook and watching self-proclaimed Area 51 whistleblower Bob Lazar on Joe Rogan’s podcast. Then he watched as the Facebook challenge went viral all over the world. “I was just like, ‘Oh man, the FBI’s going to show up.’ And they did. And I’m pretty sure I’m still on a watchlist.”

• Now, a year later Roberts lives in Bakersfield, California working in a vape shop, waiting for his ‘in person’ college classes to resume, and hoping one day to become an electrician. “It almost feels kind of like a wild fever dream in a way,’ says Roberts. “But I lived that. And that’s kind of bonkers to me. That’s a story not a whole lot of people can tell. I kind of wanna write a book.”

• After he pulled out of the Rachel event, Roberts ended up hosting a party September 19th at the Downtown Las Vegas Events Center, which served as a launch for Bud Light’s limited-edition Area 51-themed beer. Similar parties were planned in Vegas for this summer, including escape rooms and obstacle courses, and a tour of the East Coast. But COVID-19 stopped all of it in its tracks. “I’ve had quite a few people that kind of mentioned that they thought I made millions from this thing,” says Roberts. But in reality, he only sold a few t-shirts.

• Roberts’ legal rights to the term ‘Alienstock’ are part of the legal dispute with Connie West. But would he do the whole thing again some day? “Absolutely. I mean, if we can, I would love to,” Roberts says. “I think whenever it is, and if it is safe to gather again, I’d really like to kind of just keep pursuing the dream.”

It seems closer to a generation ago than 12 measly months.

many of us were concerned about was whether we’d ever get our hands on one of those Popeyes chicken sandwiches — the world was obsessed with how many people would descend on a tiny blip on the Nevada map, 50 miles from anywhere, called Rachel and what they might do when they got there.

Sunday marks the first anniversary of the day on which more than 2 million Facebook users, responding to a college student’s late-night goof, had pledged to storm Area 51 to “see them aliens.”

As a result of that random joke, Lincoln County is out $200,000, two small-business owners lost a combined

$250,000, litigation is pending and Rachel has become divided, with many of its residents — all of whom could safely gather without violating the state’s 50-person coronavirus guidelines — no longer speaking to one another.

As the proprietor of the only business in Rachel, the nearest thing

resembling a town to Area 51, she and her Little A’Le’Inn were thrust into the international spotlight in July 2019 as that Facebook prank went viral.

arts festival dubbed Alienstock. The event was thrown into disarray days before, on Sept. 9, when the man who coined the phrase “Storm Area 51” severed ties with it. The resulting four-day festival, put together at the last minute, offered the couple of thousand people curious enough to attend more of a DIY vibe.

“I’m still not unwound from it,” West says of that wild summer that found media from around the world wandering into her small cafe, “because I have to deal with the aftermath of it every day.”

That aftermath includes a lawsuit and countersuit involving the meme’s creator and his team, as well as the wrath of some members of her once-close-knit group of neighbors who remain angry with the way things played out.

“I’ve known these people for a long, long time. … Alienstock made me see some ugly in people that I never thought were that deep and ugly, right here in my community.”