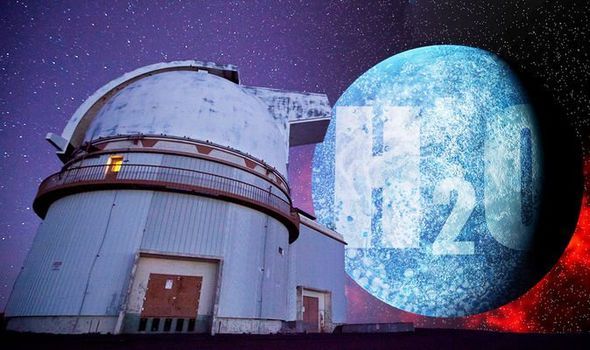 • Astronomers at the University of Warwick (Coventry/West Midlands, England) have been searching for a more efficient way to measure water vapor on distant gas giant planets when our best telescopes cannot penetrate through the exoplanet’s cloud covering. According to the science paper offered by the University’s Department of Physics, high-resolution spectroscopy technology could be the ticket. Says lead author of the paper, Dr Siddharth Gandhi, “Ground-based high-resolution spectroscopy as well as the next generation of space telescopes will be able to detect these trace species on cloudy planets, offering exciting potential for biosignatures in the future.”

• The hunt for alien life is extremely limited due to the vast distances between planets and the technology currently at our disposal. Rover on nearby rocky planets like Mars take many months looking for signs of life, with no guarantee that they can even detect such life using the technology that they carry with them. We can see light bouncing off of a far more distant exoplanet’s atmosphere, but too often clouds will prevent a light spectrum from penetrating closer to the surface.

• The Warwick scientists’ paper describes a novel way of examining exoplanet atmospheres for water vapor, ammonia, methane, and other chemicals that could be an indicator of life. High-resolution spectroscopy is a potential way of doing that, even where there is a cloudy atmosphere. “The chemical abundances can tell you quite a lot about how the planet may have formed because it leaves its chemical fingerprint on the molecules in the atmosphere,” says Dr Gandhi. As the light skims the top of the atmosphere, its spectrum is shifted and specific wavelengths of light can then be matched to specific chemicals in the air. “Detecting the molecules at the top of the atmosphere… offers a window into the internal structure as the gases mix with the deeper layers.”

• So far, most observations of exoplanets have been carried out using space telescopes like NASA’s Hubble or Spitzer. “Quite a lot of these cooler planets are far too cloudy to get any meaningful constraints with the current generation of space telescopes,” says Dr Gandhi. “But all of this could change if the proposed technology takes off.”

ASTRONOMERS at the University of Warwick have proposed a cutting-edge technique that could detect water on distant exoplanets, boosting the search for alien life.

The hunt for alien life is very limited due to the vast distances between planets and the technology currently at our disposal. Although scientists can send probes and rovers like NASA’s Perseverance Rover to nearby worlds like Mars, these missions take many months before their targets are reached. And even once these missions reach their destinations, there is no guarantee they are well equipped or sophisticated enough to find any signs of extraterrestrial life.

Matters are further complicated when astronomers study distant exoplanets far beyond our reach.

Often times we can catch a glimpse of these planets’ atmosphere by the light bouncing off them, but we cannot see much further than that.

And if dense clouds are in the way, preventing light from penetrating, the planets’ secrets could be forever hidden from sight.

But researchers at the University of Warwick have now proposed high-resolution spectroscopy technology could potentially detect traces of water well above these impenetrable clouds.

The technique, presented in the Monthly Notices of the Royal Astronomical Society, could offer a major boost in the hunt for alien life beyond Earth.

Life as we know it requires water to exist as it is one of the building blocks of life alongside carbon-based molecules and energy.