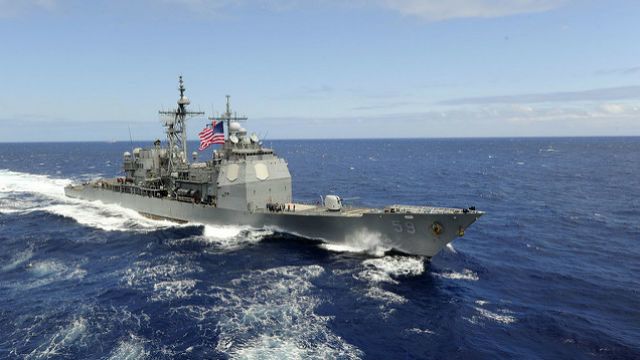 • In December 2017, the New York Times and Politico reported that the Navy’s USS Nimitz battle group encountered a ‘Tic Tac’ UFO off of the coast of San Diego in November 2004. They included video of the incident, followed by video of two other UFO encounters off of the coasts of Florida and Virginia. The Pentagon remained quiet about these incidents. (see NY Times article here)

• On April 23rd the Navy issued a statement to Politico admitting, “There have been a number of reports of unauthorized and/or unidentified aircraft entering various military-controlled ranges and designated air space in recent years.”

• While the Navy hasn’t gone so far as to admit to any alien-controlled craft, it has changed its guidelines so that sailors and aviators can make UFO reports to Navy authorities without fear of ridicule or reprisal. (see article on new Navy guidelines here)

• This development comes on the heels of a detailed paper that supports the accuracy of of the 2004 incident entitled: “A Forensic Analysis of Navy Carrier Strike Group Eleven’s Encounter with an Anomalous Aerial Vehicle.” The lead author, Robert Powell, mailed the analysis to various congressional committees, intelligence agencies, and branches of the military several months ago.

• The paper reveals that in the immediate aftermath of the 2004 ‘Tic Tac’ incident, a video of the encounter was shared and viewed widely by members aboard the USS Princeton and Nimitz via an internal military email system. Within 12 hours of the incident, a helicopter carrying nonuniformed personnel landed on the USS Princeton (pictured above) and approached Petty Officer Voorhis, who was in charge of the ship’s Cooperative Engagement Capability system, and requested that he turn over all the ship’s radar data, electronic information, and data recordings. Voorhis asked for their ID and was refused. But the ship’s captain soon ordered Voorhis to relinquished all the information, which was stored on magnetic tapes.

• The tapes contained crucial data that would shed light on the mysterious Tic Tac–shaped object. Said Voorhis, “You could literally plot the entire course of the object, you could extract the densities, the speeds, the way it moved, the way it displaced the air, its radar cross-section, how much of the radar itself was reflected off its surface. I mean you could pretty much recreate the entire event with the CEC data.”

• Powell and his colleagues found a 2013 Facebook page for the Nimitz that contains a conversation about the 2004 incident among various shipmates who served together at the time. All those on duty that day recalled it vividly in their Facebook comments; many said they were still befuddled by what they saw and why the data mysteriously disappeared.

• In mid-March 2019, Powell and other authors of the Nimitz incident paper gave a detailed presentation at a conference in Huntsville, Alabama, called the Scientific Conference on Anomalous Aerospace Phenomena. The conference was organized by a group that calls itself the “Scientific Coalition for Ufology” and includes scientists from NASA, the European Space Agency, and the North American Aerospace Defense Command. The group says it endeavors to take a ‘cold-eyed’ approach to the UFO issue, examining only cases that have hard data and credible witnesses. “We’re looking to stay neutral and build a coalition of like-minded scientists,” says Rich Hoffman, who does information systems work for the U.S. military and was the lead organizer of the event.

• The event’s big draw was Luis Elizondo, a career military intelligence officer who had managed security for the Pentagon’s highly classified $22M Advanced Aerospace Threat Identification Program. Elizondo didn’t offer anything new or noteworthy about the UFO program he once led at the Pentagon, although he did say the “effort” was ongoing (and didn’t expire in 2012 as the Pentagon says). Elizondo told the audience that he had remained in close touch with his successor in the program “… who’s still at the Pentagon, who works this effort, very closely…. I don’t mean the past, but actively working this. So it definitely continues. It’s still going. That, too, will come out hopefully soon in a very official way.”

• Elizondo insists that “disclosure has occurred” and that UFOs “are real.” “You now have people at the highest levels of the United States government and international communities of their governments finally taking this (UFO phenomenon) serious, applying real resources, real talent, real expertise to look at this and finally figure out what this is.”

• In late 2018, Elizondo gave a presentation to European UFO buffs in Rome. He mentioned a famous 1952 incident when flying saucers were reported over Washington D.C. and showed a slide of the famous image of the UFOs flying over the US Capitol. Skeptics were quick to point out that this photo was a fake. “It was actually a still [image] from a CGI [computer generated image],” says John Greenewald of the Black Vault. Elizondo apologized for the error on his company’s Facebook page.

• Skeptics have also attacked Elizondo for facilitating the release in 2017 of several video clips of Navy encounters with UFOs, saying that these videos had not been declassified, even though these video clips had been on the internet since 2007. (George Knapp and his ‘I-Team’ have recently proven that the Pentagon did, in fact, authorize those videos’ release.) Online skeptics maintain that these videos only show some sort of classified missile, aircraft or drone.

On the afternoon of Nov. 14, 2004, two F/A-18 “Super Hornet” fighter jets were 30 minutes into a training drill off the coast of Southern California when they were redirected by a Naval radio operator to a “real world situation.” Earlier that day, the USS Nimitz nuclear aircraft carrier and the USS Princeton missile cruiser had detected more than a dozen unidentified objects on their radar screens—what the Navy then referred to as anomalous aircraft vehicles.

The F/A-18s were told by the Princeton’s captain to intercept the closest anomalous vehicle, which was located about 150 miles southwest of the San Diego coastline. When the pilots reached their coordinates, they spotted from an altitude of 20,000 feet a disturbance at the ocean’s surface. One of the pilots, commanding officer Dave Fravor, reported that he saw a white oval or “Tic Tac”–shaped object about 50 to 60 feet in size moving just above the churning water.

Fravor headed down for a closer look. What happened next was “like nothing I’ve ever seen,” he recounted in a 2017 New York Times article. The object accelerated so fast that it disappeared in a blink of an eye. A pilot in the other F/A-18 has subsequently described the episode similarly; he also says he watched as the object zipped around Fravor’s plane before it darted off in a flash.

Meanwhile, according to testimony from Petty Officer Gary Voorhis, who was stationed on the Princeton at the time of the episode, “At a certain point there ended up being multiple objects that we were tracking. That was towards the end of the encounter and they all generally zoomed around at ridiculous speeds, and angles, and trajectories and then eventually they all bugged out faster than our radars.”

Vague details of the incident first came to light several years ago, after the Times and other media outlets reported on it. No human-created military technology had such capabilities, the news stories suggested, so were the mysterious objects otherworldly or a mass delusion? The Pentagon wasn’t saying anything. But now, according to a statement issued on April 23 to Politico, the Navy admits, “There have been a number of reports of unauthorized and/or unidentified aircraft entering various military-controlled ranges and designated air space in recent years.”

Whoa. That was major news, as was the part about the U.S. military now pledging to update its guidelines so “reports of any such suspected [UFO] incursions can be made to the cognizant authorities.” Politico notes, “To be clear, the Navy isn’t endorsing the idea that its sailors have encountered alien spacecraft. But it is acknowledging there have been enough strange aerial sightings by credible and highly trained military personnel that they need to be recorded in the official record and studied—rather than dismissed as some kooky phenomena from the realm of science-fiction.”

This development comes on the heels of a detailed paper of the 2004 incident that was recently completed and made public by a group of researchers who aimed to demonstrate that the incident actually happened. Titled “A Forensic Analysis of Navy Carrier Strike Group Eleven’s Encounter with an Anomalous Aerial Vehicle,” the paper, which was not published in an academic journal, does not make any claims for the origins of the objects, though it should be stated that all the authors have a long-standing interest in the UFO topic. The lead author, Robert Powell, tells me that he mailed the analysis to various congressional committees, intelligence agencies, and branches of the military several months ago. Whatever the biases of Powell and his fellow authors, there is no denying the body of evidence they amassed via Freedom of Information Act requests and interviews with service personnel.