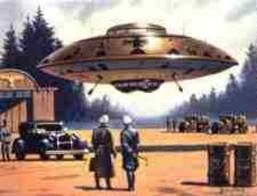 For the first time, the legendary 2006 Russian documentary ‘Third Reich – Operation UFO’ in its entirety, fully translated into English and available for free viewing. Many thanks to Irina Du Toit for the translation and the saucer people for the subtitles.

The film explores the historical mysteries and rumours of a Nazi secret base in Antarctica, the 1947 flying saucer attack on Admiral Byrd’s ill-fated ‘Operation Highjump’ expedition and the occult origins of Third Reich anti-gravity engines, flying discs and ancient Atlantean technologies viewed through the lens of perhaps the three most mysterious twentieth century German organisations of all: the ‘Thule Society, ‘Vril Society’ and the ‘Ahnenerbe’

One of the core themes of the film is the alleged existence of ‘Base 211’, the legendary underground Nazi base in the Antarctica. Drawing upon the pre-war Nazi interest in Antarctica and the creation of ‘New Swabia’; the testimony of German U-Boat submarine commanders and the alleged disappearance of thousands of Nazi scientists and engineers at the end of the war, personnel that cannot be accounted for by the Vatican and Odessa ‘rat lines’ or American ‘Operation Paperclip’ activities. In addition, the film analyses the actual geo-physical possibilities of an underground base in Antarctica.

The other core theme is the alleged existence of a Nazi flying saucer program and the many evidential strands that this area generates. From the supposed channeling of extraterrestrial engineering schematics by members of the German occult group ‘Thule Society’ in the early part of the twentieth century to the ‘implosion engine’ of Viktor Schauberger and its possible appropriation by the Third Reich.

Bringing us to the the latter part of the twentieth century the documentary illustrates the many sightings of unknown crafts around the Antartic region and the theoretical basis for polar wormholes as entrance and exit points for visiting extraterrestrial spaceships and the possible involvement of HAARP, as well as asking why nearly all American Antarctic bases seem to be populated by agents of the National Security Agency and CIA.

Like the study of any phenomena and/or events that exist at the edges of consensus reality, occupy imaginal realms and are subject to historical revisionism; the interface of myth and reality is a shifting mosaic of fact, speculation, disinformation and fantasy, or to use the phrase of head CIA counter-intelligence spook, James Jesus Angleton, we have entered a “wilderness of mirrors”.

Certainly there are elements in the documentary that give cause for concern such as the alleged “Special Bureau 13”, the Nazi secret flying saucer research group and its similarity to the top secret government agency in the early eighties role playing game “Bureau 13: Stalking the Night Fantastic ” (though equally the RPG title could be an insider homage to this secret Nazi organisation). Likewise, there is the lack of information on the existence of the US Navy destroyer ‘Murdoch’ in the testimony recounted by pilot ‘John Sireson’ in his description of the flying saucer attack on Admiral Byrd’s fleet (testimony taken from an interview by the late pioneering American researcher Leonard Stringfield).

Operation UFO: Bases in the Antarctic

For the more dedicated –  several years of recent research by UK based David Griffin, authentic Kiwi experiencer Alec Newald and Nexus Magazine editor Duncan Roads may similarly  locate off-shoot theories as to why a certain ET race was working from pre WW1 era on a small island in the Falklands – right up to its invasion by UK forces in 1982. From here we enter the mind-bending realms of A.I.  or  ‘sentient nano’ substances [AKA the ‘black goo’ – that’s a long story re the creation  of that term/meme!], geopolitical covert wars and bizarre deaths at a British firm called Marconi in the immediate years after the war with Argentina. For more on the latter, vast evidence files – search google material or specific keyword video searches related to  conference talks by Griffin and Newald on youtube or formal Nexus DVD. Otherwise, an early (ie:  3-way research process,  still in informal draft phase) radio interview with US  station “A Global Focus” can be found archived here: https://www.youtube.com/watch?v=_K9AMf0Vhqs

Equally, the testimony of Admiral Byrd that flying saucers attacked the ‘Operation Highjump’ fleet is of historical record as is his testimony to Congress of enemies that have the ability to fly “pole to pole”. Likewise, the creation of ‘New Swabia’ is as much a historical fact as the ‘impossible’ existence of the ‘Piri Reis’ map.

What sets this documentary apart from most others of its kind is the inclusion of high ranking Russian scientists and military personnel and their testimony should not be discounted.

As the great American anti-fascist researcher Dave Emory says of many elements of deep politics: “its food for thought and grounds for further research”.

Exopolitics UK and ‘The Saucer People’ are looking for other non-English UFO/alien related videos to help translate and subtitle, we have dozens of Russian documentaries waiting to be translated into English. If you speak Russian and are interested in translating any of this material please get in touch.

Likewise, if your country of origin has produced any UFO/alien documentaries and are interested in creating English translations to be subtitled please contact us.

It took a lot of hard work to make the translation of this documentary into English and create the subtitles and we would like to dedicate our work to the late American researcher Wendelle Stevens who is quoted in the film, In our opinion, Wendelle, who died in 2011 was one of the few genuine professional researchers in the UFO community and is sadly missed.