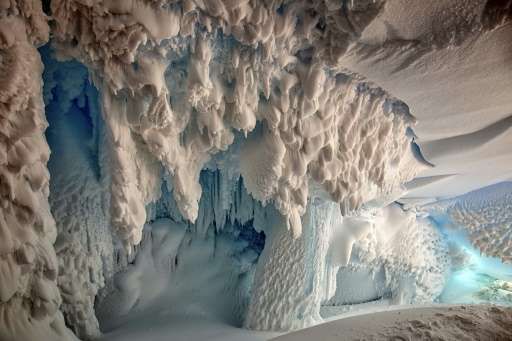 • Australian scientists concede that there may very well be warm caves underneath Antarctica’s glaciers due to the volcanic activity.

• There is a possibility that entire ecosystems exist beneath the frozen surface, including new species of plants and animals.

• [Editor’s Note]  This study supports the theory that Nazi’s established a base under Antarctica during WWII, and that secret bases still exist there today.

The caves, hollowed out by steam from active volcanoes, are light and could reach temperatures of 25 degrees Celsius (77 Fahrenheit), researchers said, raising the possibility of a whole ecosystem of flora and fauna deep beneath the frozen surface.

A study led by the Australian National University around Mount Erebus, an active volcano on Ross Island in Antarctica, showed extensive cave systems.

While most of the DNA was similar to mosses, algae and invertebrates found elsewhere in Antarctica, not all sequences could be fully identified.

“The results from this study give us a tantalising glimpse of what might live beneath the ice in Antarctica -– there might even be new species of animals and plants,” she said.

“The next step is to go and have a really good look and see if we can find communities living beneath the ice in Antarctica.”