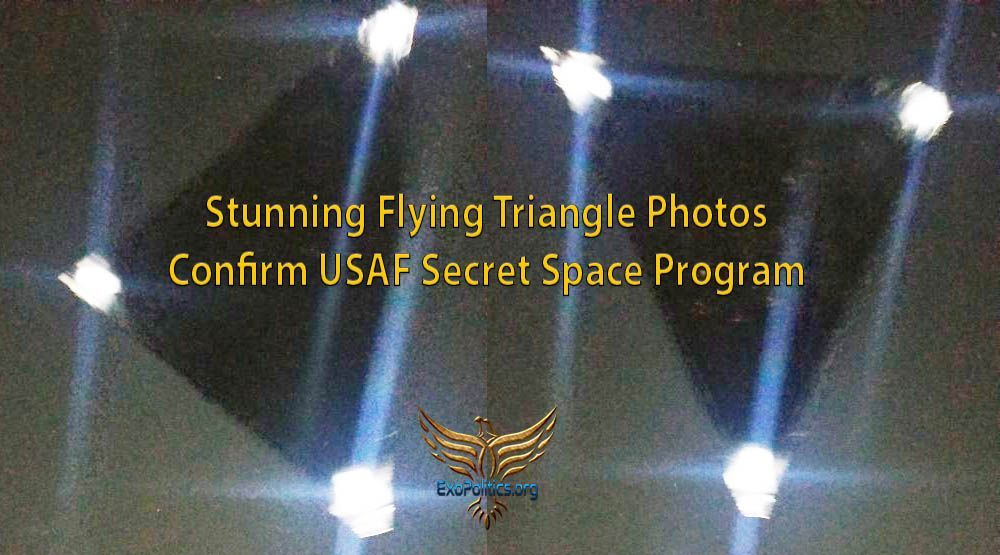 • Acclaimed ufologist, secret space program scholar, and Exopolitics.org founder, Dr Michael Salla, posted images of a triangular-shaped craft with well-defined edges and lights, hovering in the skies of Orlando, Florida. The images were given to Dr Salla by his exclusive insider known as “JP” who took the photos in the early morning of February 18th.

• Dr Salla’s report also reveals that two ‘men in black’ approached JP soon after the incident. These men threatened JP with a gun, demanding that he not disclose the sighting. The next thing JP remembered was waking up from bed the next morning. When JP checked his smartphone, the videos he took were deleted but the images were still intact.

• Viewers of the video on the ‘Michael Salla’ YouTube channel, and the UFOmania channel are convinced that this is confirmation of the existence of a secret US Air Force space program (from nearby McDill AFB), and evidence that Donald Trump’s Space Force is already operational and patrolling the skies.
• Other viewers believe that this actually a TR-3B craft, an anti-gravity space vessel alleged developed by the USAF during the Gulf War using reverse technology from advanced alien visitors.

• [Editor’s Note]   See Michael Salla’s article at Exopolitics.org, and at ExoNews.org. See also a 1:12 minute video clip of the flying triangle photos below.

Popular conspiracy theory UFOmania has recently shared the image of an apparently triangular shaped unidentified flying object (UFO) hovering in the skies of Orlando, Florida. The YouTube channel revealed that these images were originally shared on the conspiracy theory website exopolitics.org, and the images were taken by a man, confidentially known as JP.
As per the website report, the incident happened on February 18 at around 1.20 am. The image of the UFO spotted in the video has three well-defined edges, and lights were seen glowing in these areas.

The report also revealed that two men, most possibly men in black approached JP soon after the incident. Soon, these men pointed a gun on JP and threatened him to cover up the sighting. The next thing JP remembered was waking up from bed on next day morning. When JP checked the smartphone, the videos he took were deleted, but the images seem intact.

The video uploaded by UFOmania soon went viral, and viewers of UFOmania seem convinced about the secret USAF space program theory put forward by conspiracy theorists. Many viewers argued that Donald Trump’s space force is already operational, and the force is now conducting regular patrolling in the skies.

1:12 minute clip of photographs of triangle craft over Orlando