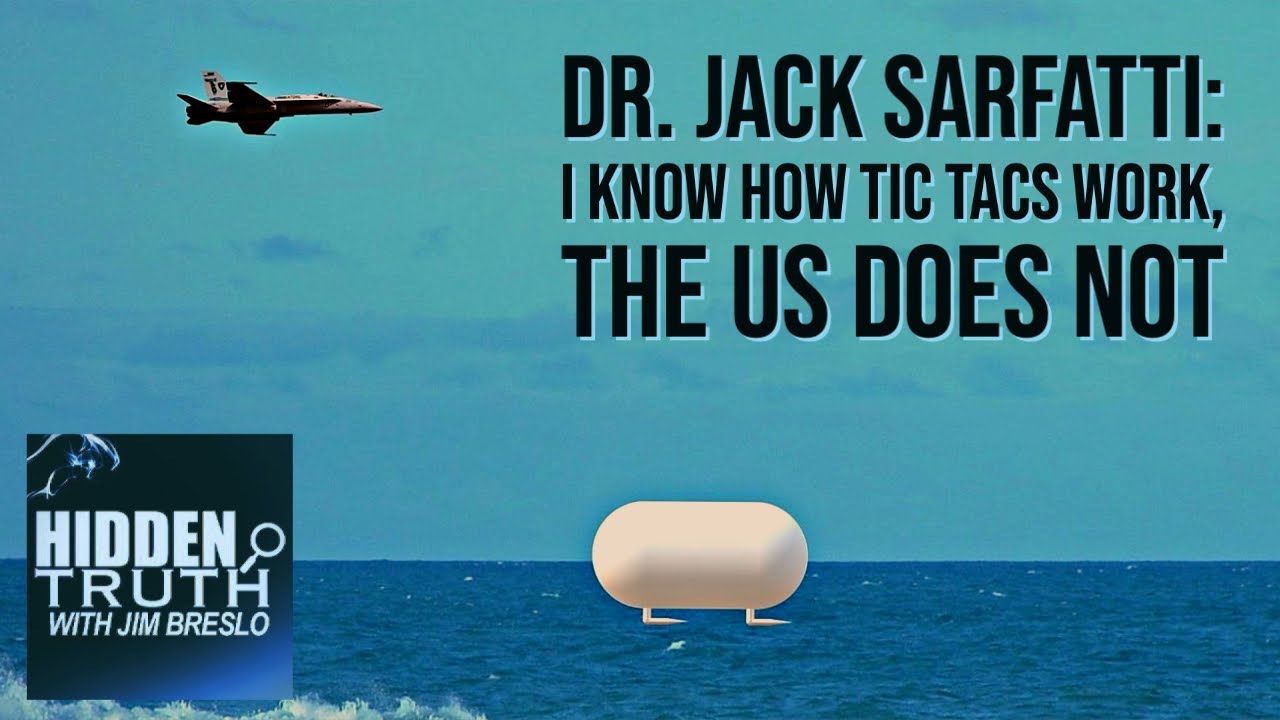 • The sighting of the “Tic Tac”-shaped craft off the coast of San Diego by Navy personnel in 2004 has become one of the most famous UFO encounters of all time. According to a navy pilot, the UFO dropped from 80,000ft to around 28,000ft in several seconds and then from 28,000ft to just above sea level in under a second. This means that the craft was travelling at 19,000mph – a speed unimaginable for Earthly propulsion technology.

• Dr. Jack Sarfatti, a world-renowned expert in quantum physics, was a recent guest on The Hidden Truth Show with James Breslo. The 80-year old Sarfatti offered an explanation for the Tic Tac UFO’s incredible aerial maneuvers. He says that a ‘metamaterial’ (ie: extraterrestrial material) allows the craft to slow down the speed of light. (see full interview below)

• Sarfatti said that scientists tend to dismiss exotic technology such as warp drive, time travel and wormholes because it would take more energy to achieve than is possible. But the Tic Tac craft has no engines or visible means of propulsion. So it apparently does not require the amount of energy associated with ‘conventional propulsion’.

• The Tic Tac craft contain such ‘metamaterial’. According to Sarfatti, when you pump electromagnetic energy into this metamaterial, it creates a resonance. This resonance creates a ‘warp drive’ which “squeezes the space in front of it and stretch the space behind”, so that “the speed of light inside the material can go down to a very small number.” The craft therefore doesn’t just move through space, but “controls it”.

• Furthermore, Sarfatti claims that this Tic Tac metamaterial technology came from Earth humans from the future. When people from the future come back in time to create a ‘past event’, which in turn heralds the advent of this very technology, it creates a ‘causal loop time paradox’ known as the “Novikov loop”. Sarfatti explains, “Both events… exist in space-time, but their origin cannot be determined.” In fact, the Tic Tac UFO seen off of California in 2004 came from the future.

• Sarfatti says that metamaterial has already been extensively used in Earth’s industries, such as for sensors and lenses. He says that “talks are ongoing” to personally present his theory to President Donald Trump.

A top physicist has claimed the Nimitz UFO was able to reach never-before-seen speeds thanks to a “metamaterial” that let it “time travel”.

The sighting of the “Tic Tac” craft off the coast of San Diego in 2004 has become one of the most famous UFO encounters of all time.
One of the most startling descriptions given by the fighter pilot witnesses was that it somehow dropped from 80,000ft to around 28,000ft in several seconds and 28,000ft to just above sea level in under a second.

Such a feat to reach sea level would mean the craft would have had to be travelling at 19,000mph – speeds unimaginable for Earthly craft.
But Dr Jack Sarfatti, a world-renowned expert in quantum physics and author of several books in the field, believes he knows what happened.

Speaking on The Hidden Truth Show with James Breslo, he suggested the craft used a type of meta-material that allowed the speed of light to “slow down”.

“See the problem is this, if you read any of the standard papers in the field, if they’re talking about warp drive, time travel and wormholes they say the problem is it ‘takes too much energy’ to achieve it,” he explained on the YouTube podcast.

“The tic-tac does not need a lot of energy. They observed the tic-tac going from 80,000ft down to 50ft in less than two seconds and there’s no jet engines, no flares.

“It’s going at 1,000s of Gs, how’s it doing that? There is no way it can do that by conventional propulsion.”
Meta-material that the fuselage of the Nimitz UFO is built on helps explain this unimaginable speed.