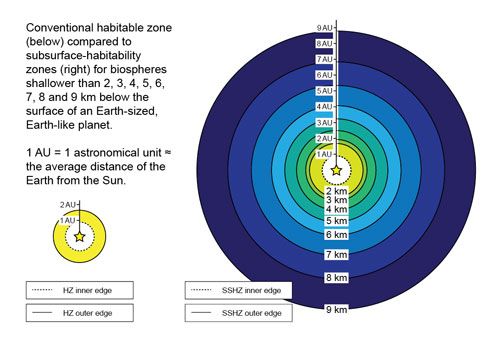 Scientists at the University of Aberdeen and University of St Andrews, Scotland, have concluded that extraterrestrial life is far more prevalent than previously thought. In a paper titled “Circumstellar habitable zones for deep terrestrial biospheres,” released in the journal, Planetary and Space Science, they have redefined the “Goldilocks Zone”, the optimal zone for life to exist on planets. They have found that life can flourish beneath a planet’s surface where liquid water can be found at varying depths.

Planets in our solar system where the surface is too frigid for liquid water to exist, may be teeming with life below the surface where liquid water can exist in abundance. Planets such as Mars and moons such as Europa and Ganymede may be teeming with life under their respective frigid surfaces. The scientists’ findings is likely to revolutionize the way in which extraterrestrial life is thought to exist, and where it may be found. Perhaps more significantly, their paper gives support to claims that extraterrestrial life can exist inside worlds with extreme surface conditions such as rogue planets in interstellar space, and extremely hot planets such as Venus.

The Goldilocks zone is currently defined as a region in space where liquid water can exist on the surface on a planet without boiling or freezing. For our solar system, this is roughly the region in space from Venus to Mars. However, as one goes beneath the surface, the temperature increases due to the internal heat generated by the hot cores of a planet or moon. This means that while water may instantly freeze on the surface, thereby making life difficult to establish itself there, liquid water may existence in abundance below the surface.

This is how one of the scientists involved in the “Circumstellar habitable zones” paper, Ph.D. student Sean McMahon, described in the abstract this new way of locating extraterrestrial life:

We introduce a new term, subsurface-habitability zone (SSHZ) to denote the range of distances from a star within which rocky planets are habitable at any depth below their surfaces up to a stipulated maximum, and show how SSHZs can be estimated from a model relating temperature, depth and orbital distance. We present results for Earth-like, Mars-like and selected extrasolar terrestrial planets, and conclude that SSHZs are several times wider and include many more planets than conventional surface-based habitable zones.

In response to questions from the International Business Times, McMahon also opened up the possibility that rogue planets that drift in interstellar space may even harbor life:

Rocky planets a few times larger than the Earth could support liquid water at about five km below the surface even in interstellar space (i.e. very far away from a star), even if they have no atmosphere because the larger the planet, the more heat they generate internally.”

The scientists findings give surprising support for the radical theory proposed by Zecharia Sitchin that a rogue planet called Nibiru spends most of its 3600 year orbit in interstellar space. According to Sitchin, the Sumerians believed that Nibiru was the home world of a race of beings called the Anunnaki. The University of Aberdeen scientists paper makes it possible that the Anunnaki, if the Sitchin’s interpretation of the Sumerians is correct, established themselves in underground colonies to survive the long periods in interstellar space.

Furthermore, McMahon pointed out that subsurface conditions protect life from extreme conditions on the surface, and this may be the norm on most habitable planets:

The surfaces of rocky planets and moons that we know of are nothing like Earth. They’re typically cold and barren with no atmosphere or a very thin or even corrosive atmosphere. Going below the surface protects you from a whole host of unpleasant conditions on the surface. So the subsurface habitable zone may turn out to be very important. Earth might even be unusual in having life on the surface.

The scientists’ findings makes it possible that worlds such as Venus, with very hot surface conditions may have a “subsurface-habitability zone” that support life. This gives support to the claims of several extraterrestrial “contactees” that the planet Venus hosts life in underground civilizations. For example, Luis Fernando Mostajo claims to have been taken to an underground civilization on Venus via a stargate device he calls a “Xendra”.

The Goldilocks zone in space is being radically redefined as scientists find more ways in which liquid water can exist in abundant supply on different planets or their moons. The new idea of “subsurface-habitability zones” will dramatically increase the number of exoplanets and exomoons deemed suitable candidates for extraterrestrial life. It is also likely that in the future, we will find that our own solar system harbors life hidden in subterranean regions of different planets and moons.

. Permission is granted to include an extract (e.g., introductory paragraph) of this article on website or email lists with a link to the original.