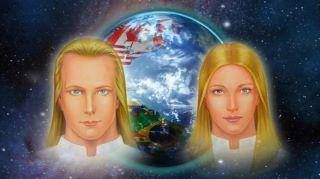 Paola Harris, Med, instructor for the Exopolitics Institute has created a  14 week course with an international perspective that highlights contact with Human –type aliens and also messages given to contactees in a 1950’s  possible nuclear annihilation scenario.

The return to the southern California Giant Rock Conferences sponsored by George Van Tassel included numerous contactees receiving precise messages and warnings at a crossroads in  our civilization. These writings are relevant even today. According to the communication given by the Venusian space traveler Orthon to George Adamski in the early 1950’s, Humanity could have transitioned from a “war economy” to a “rocket travel among the stars economy” that would have been equally lucrative. By now,we could have entered the proverbial cosmic neighborhood to meet our neighbors and we would have avoided the path to self destruction that we are on today.

Likewise, according to Dr. Frank Strangess, spokesman for the Venusion Commander Valiant Thor who spent three months advising Eisenhower and Nixon at the Pentagon( Book: STRANGER AT THE PENTAGON), we could  have altered our lifestyle and our diet so we could live longer. But it seems our institutions are based on promoting stress, sickness and ill health as a form of population control and an economic dependence on drugs and pharmaceuticals.

If we review this material today, we find also that according to messages given to  Howard Menger in Highbridge, New Jersey in 1954, we should keep our blood alkaline to avoid cancer and other diseases, and eat a diet of organically grown fruit and vegetables to prolong life. In those days, these extraterrestrial races walked among us undetected, and according to the Giant Rock contactees and the Giant Rock Convention literature, they were our “space brothers”!

This events have not only occurred in the American scene of 1950’s, but we know now that similar human-alien interaction was also taking place in Pescara, Italy in 1956 . According to the late engineer Stefano Brescia who wrote the book “Mass Contacts”, recently translated into English, a unique situation was taking place on the Adriatic coast of Italy. To promote and promulgate a friendship experiment, a selected human group of contactees in 1956,were asked to maintain URREDA, a technology of love and harmony created by the extraterrestrials. Appropriately named the W-56’s, this ET group was able to interact with the Italians for a number of years before conflicts set in.  A similar friendship case is recorded in Chile and other places in Latin America where contactees are presently engaging the space brothers.

Engaging the human population in any kind of relationship seems to have irritated the management group of UFOLOGY who found a chance to switch the contact scene exclusively to the fear based alien abduction scenario after the onset of the Betty and Barney Hill case of 1961. The entire field of Ufology has fossilized into this stereotypical view ever since the 1960’s, alienating us from our possible cosmic relatives.

However, a ray of light surfaced in 2009, when Vatican Jesuit Astronomer, Father Funes stated that the “Just as there is a multiplicity of creatures on earth, there can be other beings, even intelligent, created by God. This is not in contrast with our faith because we can’t put limits on God’s creative freedom… “Why can’t we speak of a ‘brother extraterrestrial’? It would still be part of creation…”

Perhaps, is time to return to the past to study the future, to study those past messages and bring back a more balanced perspective to the entire UFO research community.

Information about Exo-109 – Messages from Space – Past and Present contact is available here.

To learn about the Exopolitics Institute Certfication program, click here.