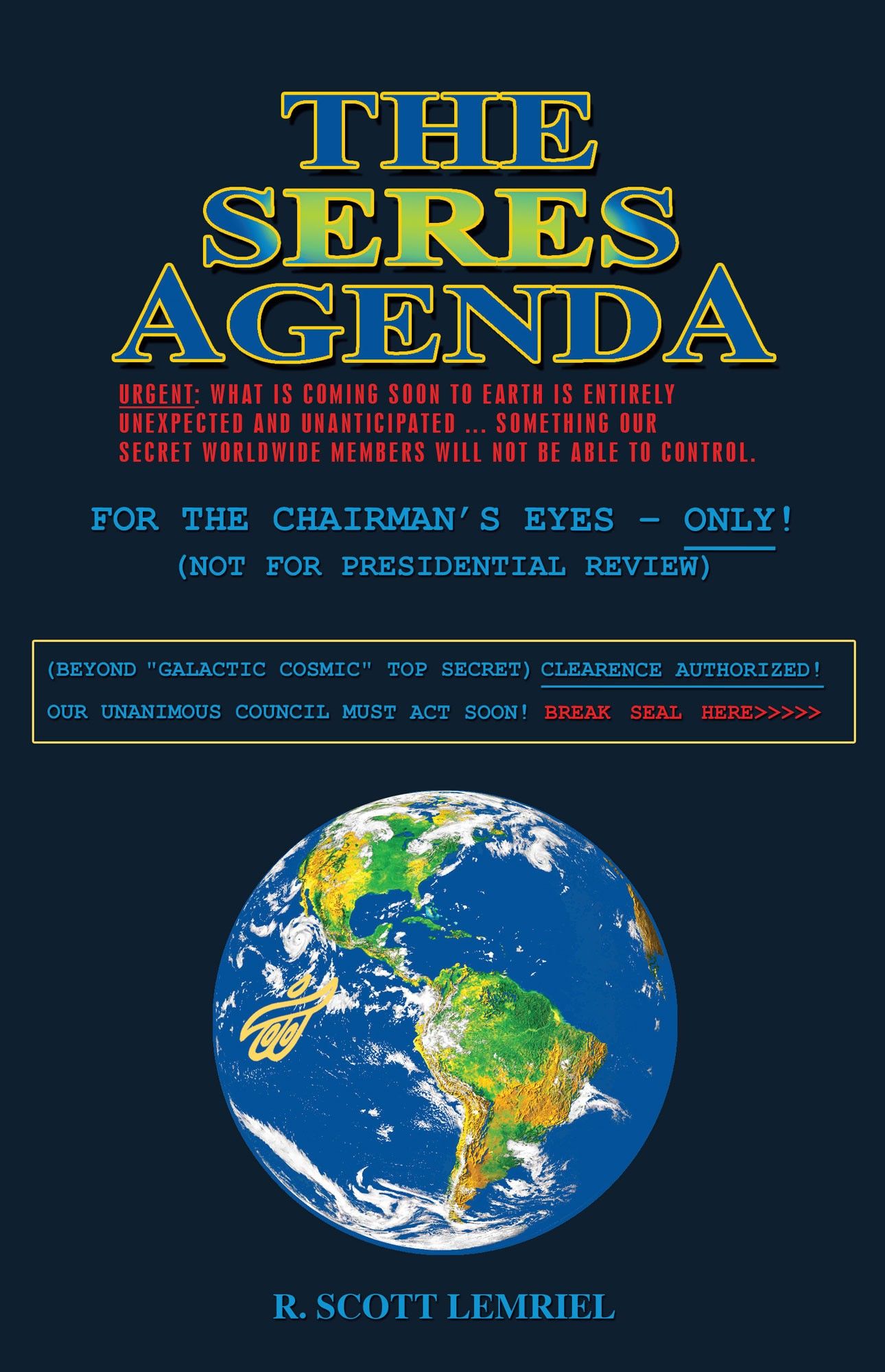 Golden age of alien disclosure & ascension according to Seres Agenda

The Seres Agenda is a fiction based on fact novel that aims to expose the secret extraterrestrial control of Earth. A negative faction of Reptilian aliens has conspired with national elites over centuries to have a stranglehold on political and economic power. David Icke would be proud of the way Scott Lemriel spins a tale of malevolent human eating Reptilians with shape shifting technologies manipulating unwitting human elites. The pay day for the Reptilians is when they either succeed in manipulating the Earth into joining their vast empire, or engineering a planetary collapse where they can freely exploit a war torn planet.

Into this alarming situation emerges the good guys, the “Galactic Inter-dimensional Alliance of Free Worlds” that have been recently empowered by mysterious golden pyramids emerging throughout the known universe. The pyramids deliver a strange golden light, a new Ray, that instantly transforms evil into good by way of uplifting consciousness into higher dimensions. In short, the Ray transmitted by the golden pyramids is creating a universe wide ascension process whereby individuals, groups and civilizations can be uplifted into higher dimensions.

The Galactic Alliance has been successful in developing new technologies that act as conduits for the golden pyramid “ascension” Ray. The most nasty Reptilians imaginable are instantly transformed into back slapping good guys after being exposed to the golden light Ray of the pyramids which are spontaneously emerging in different places and sizes, and are being channeled through various technologies connected to the pyramids.

It emerges that the Reptilians were not all that different to the humans they were manipulating insofar as both had been exposed to subconscious programming – trauma based mind control – that prevented one from connecting to one’s higher self or “atman.” The Ray from the Golden pyramids immediately cut through the subconscious program and allow the connection between the higher self and conscious mind. Additionally, the Galactic Alliance has “mind liberation” technology in their advanced deprogramming chambers that removes the subconscious programming by exposing the painful traumas that were inserted at some point in a person’s history that can stretch several lifetimes.

In the novel, we are given a steady dose of key characters and villans being subjected to the Galactic Alliance’s mind liberation technology or the golden pyramids’ new Ray as the means by which they see the light of day. There is no payback or revenge in this novel as transformed heroes, human elites and ruthless Reptilians all recognize how they were each duped by more manipulative beings that inflicted mind control on them. For the Reptilians, it’s been 500,000 years since they were subjugated by a white winged Reptilian species from another dimension who manipulated the former into becoming the scourge of our galaxy.

The Seres Agenda is a heady mix of factual events, mysterious scientific phenomena and unbridled optimism. There is certainly much evidence to support the book’s core premise that humanity is secretly being manipulated by extraterrestrials. One can read Jim Marrs well researched book, Rule by Secrecy to see how far back in human history one can go to discover elite human cooperation with an extraterrestrial group known as the Anunnaki, which Marrs suggests are Reptilians. More recently, we have had agreements reached by human elites and extraterrestrial groups in the US and other countries. These negotiated agreements are described in Exposing U.S. Government Policies on Extraterrestrial Life (2009). The idea of negotiated agreements between human elites and extraterrestrial burst into mainstream consciousness with a recent article by Iran’s Fars News Agency that the US was controlled by Tall White aliens that were previously aligned with Nazi Germany. The Washington Post, Forbes, and many other mainstream media articles were now discussing a possibility that previously was considered too ridiculous to even consider let alone publish.

There is also much evidence to support the book’s other key premise that positive human looking extraterrestrials are trying to assist humanity from behind the scenes. These human extraterrestrials have largely been cut out of the loop of elite decision making for the future of the planet earth due to the mendacity of elites who have secretly negotiated agreements with manipulative non-human extraterrestrials – Grays and Reptilians. The book, Galactic Diplomacy: Getting to Yes with ET, reveals the main extraterrestrial races involved in both manipulating and assisting the Earth. It is the latter category of extraterrestrials that receives little international media coverage given the dominant media focus on alien abductions and cattle mutilations.

In addition, it is also being discovered that the universe is experiencing a strange new phenomenon in the form of powerful bursts of information coming from black holes. Previously it was thought that black holes merely absorbed energy, now astronomers are confirming that they are being observed to emit powerful bursts of energy. Alex Collier, an alleged contactee with extraterrestrials from Andromeda, was among the first to claim that black holes are transmitting energy. He was told by his Andromedan contacts that the universe is experiencing new energies from black holes that are having a transformative effect on consciousness throughout the galaxy. Here we can think about universal ascension, the rapture, and similar concepts found in various new age and religious literatures. This energy coming out of black holes has some similarities to the new Ray being transmitted by the golden pyramids depicted in The Seres Agenda.

What I found fascinating was how the golden pyramid Ray altered DNA to the extent that individuals began being transformed into Ascended Beings that could instantaneously travel through space and time by the power of consciousness alone. I have described such beings as Celestials that according to Nikoli Kardarshev’s typology of extraterrestrial civilizations are Type IV. In The Seres Agenda, the Seres are a group of very ancient Ascended Beings that are behind the ascension process that has Earth as a focal point for a universe wide ascension process. The Seres Agenda is an excellent primer for the fantastic opportunities that lie ahead for those willing to ride the wave of Universal Ascension.

Unfortunately, where the book fails to be persuasive is in its depiction of humans and aliens alike being immediately transformed by the ascension energies being transmitted by the golden pyramids. We are expected to believe that the free will choice of all when exposed to the Golden pyramid Ray is to be transformed into back slapping good guys in touch with their true self where they recognize the unity of life. To me that sounds overly optimistic. I think a more realistic scenario is depicted in a new book called From Contact to Ascension, where the “ascension energies” basically lead into a universe wide split in terms of a fundamental choice all intelligent life will need to make. There will be those that choose to “ascend” into the higher realms of unity consciousness and instant manifestation of ones most heartfelt desires, and those that like things pretty much the way they are in terms of dualistic belief systems. I certainly don’t see adherents of fundamentalist religions making a free will choice to embrace and manifest the Higher Self, Atman or “God” within. Fundamentalists see such ideas as blasphemy and Luciferian, and will be only too happy to separate from the “unbelievers” of an all-powerful transcendent God that benignly rules over us as long as we follow the guidelines of a sacred text.

The Seres Agenda is thought provoking, entertaining and provides powerful insights into the hidden control system of planet Earth. It is particularly helpful in depicting the extent to which elites and their alien partners will go to maintain their power over the planet, even destroying it out of spite when their plans fail. The book does a fine job in describing the countervailing power of human looking extraterrestrials and Ascended Beings assisting our planet despite the constraints placed upon them by the negotiated agreements between human elites and their Reptilian/Gray extraterrestrial partners. The book’s most important contribution is that it describes a near future based on the ideas of full disclosure of extraterrestrial life and a universe wide ascension process. Imagine a future where you live in a utopian world with greatly enhanced personal abilities where you can instantly manifest your most cherished dreams. While ascension might not be for all, it undoubtedly will affect all. I highly recommend the Seres Agenda as well worth reading and preparing yourself for life changing events in a corner of the galaxy close to you.