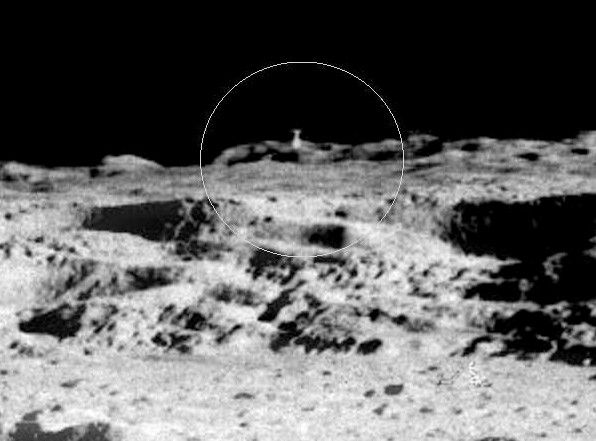 Is the US Congress investigating alien bases on the moon?

On January 9 Gordon Duff published an article declaring that a US Congressional investigation of alien moon bases was underway. In the article, Duff doesn’t disclose sources to back up his claim, but referred instead to stories from other publications that touch on various aspects of his claim. Among them is a photo of what appears to be a tall tower on the moon; and a controversial photo and video of an alien moon base allegedly discovered and leaked by China, yet critics claim that the video is actually old NASA footage. According to Kerry Cassidy from Project Camelot, Duff’s claim is a genuine disclosure with some necessary redirects and disinformation thrown in for the sake of plausible deniability and for the benefit general reader still unaccustomed to the reality of an extraterrestrial/UFO cover up.  Is it possible that the US Congress has begun holding secret hearings on decades-old evidence of alien moon bases?

Discussions of alien moon bases and videos of structures on the dark side of the moon aren’t new. That congress is investigating, not only the bases themselves but three decades or more of continually doctored data from NASA and defense space projects is news.

The closest Duff gets to supporting this astounding claim is referring to photos and a video of alleged alien structures on the moon. The first photo, and video appears to show a base of some kind on the moon. The photo and video were allegedly taken by China’s second lunar orbiter the Chang’e-2, and leaked to the world by China. According to DarkGovernment.com:

The image, however, has been identified with a NASA lunar orbiter mission, not the Chinese.Further investigation has led some to believe the image is an outright hoax, while others are still adamant it’s real.

Another photo appears to show a tower on the moon [see top image] which according to Duff “is approx. 13 miles high, 4 miles in diameter at the base, the dome top has three miles in diameter.”

Duff cites DarkGovernment.com which says: “insiders Ken Johnston and Donna Hare accuse the space agency of “ordering a cover-up of photographic evidence,” and that “NASA doctored, obfuscated, and obscured thousands of photos over the years.”

Duff doesn’t give sources to substantiate his headline grabbing claim that the US Congress is hearing about a NASA orchestrated alien cover up. Yet he does refer to two witnesses, former NASA contractors/employees who would know about such a cover-up. Ken Johnston and Donna Hare would be among the key witnesses that would be expected to be called before such a Congressional committee. To that list, one could add Karl Wolf who has also testified publicly that NASA along with the US Air Force has tampered with evidence of extraterrestrial life on the moon. Wolf is mentioned in the DarkGovernment article that writes:

As reported by the Washington Times, “Karl Wolf, an Air Force sergeant who was assigned to the National Security Agency, said that mysterious structures were discovered on the far side of the moon when the United States was mapping its surface before the 1969 lunar landing. Those photos too were culled out of the public record.”

Without naming his sources, and only giving photos and videos to indirectly support his claim, it would be easy to dismiss Duff. No so fast according to Kerry Cassidy from Project Camelot who writes:

Veterans Today is disclosing right on time and at the level to which they feel their audience 'can handle the truth'.  Mixed in with proper doses of disinfo and misdirects.  But nonetheless.  It is happening.

And then there’s the publication, The Canadian that reports: “Dr. Micheal Salla has indicated that there is a Military Industrial Extraterrestrial Complex or MIEC, and that Earth is being assimilated by an alien agenda which also operates on Earth’s Moon.”

Let me set the record straight here. It is true that I have written about a Military Industrial Extraterrestrial Complex or MIEC which derives from a classified set of agreements and cooperation between select government/military/corporate entities and some extraterrestrial groups.  An alien agenda based on an assimilation program, however, is not something I have claimed as alleged by the Canadian. That is something that Dr David Jacobs and Budd Hopkins have discussed in relation to Gray extraterrestrials conducting an extensive hybridization program. In contrast, I have stated repeatedly that the evidence points to most extraterrestrial groups being highly ethical and taking a non-interventionist approach to human affairs. Most extraterrestrials have been silently assisting humanity by a variety of consciousness raising activities and limited human contacts that I have recently discussed at length. One cannot speak of a single alien agenda, since there are many alien groups visiting earth, some of which are directly competing against each other. This would not be the first time that the Canadian has misrepresented my writing in a way that undermines my credibility as a researcher. Unfortunately, both DarkGovernment and Veterans Today have perpetuated the inaccuracy or disinformation to promote the view that I support the belief in a single alien agenda of assimilation.

Duff’s claims are extraordinary, and may well be a mix of genuine facts and disinformation. If Congress has indeed begun holding secret hearings on alien bases on the moon, that would be a welcome development. Perhaps Donna Hare, Karl Wolf and Ken Johnston are testifying right now as of this writing. Perhaps, Duff has got it all wrong. One day, however, the truth about alien bases on the moon will be conclusively determined, and the US Congress will hold hearings about how long and why evidence was withheld for so long.