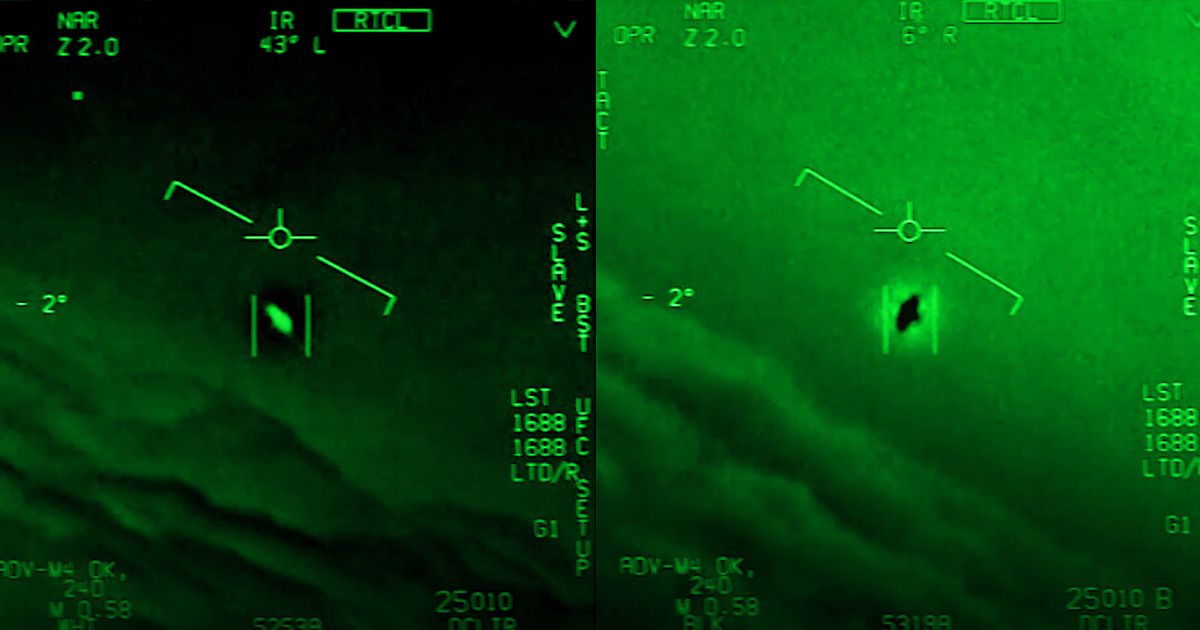 • Diane Tessman, the author of Future Humans and the UFOs, thinks that the USS Nimitz “Tic Tac” UFO displayed human characteristics. But at the same time, the UFO displayed an advanced technology in its propulsion and maneuverability that we have not yet achieved here on Earth at this time. Tessman’s conclusion? “My answer to the entire UFO puzzle is that it is us from the future rather than ETs, and as far as the Tic-Tac [crafts] go I don’t think [they] can be anything of this Earth or of this time period. That’s kind of the conclusion reached by experts.”

• The US Navy has officially classified the ‘Tic Tac UFO’ as an “unidentified aerial phenomena”, or ‘UAP’. Tessman points out that “The Navy did maneuvers in Southern California between San Diego and Tijuana every year there, and these Tic Tacs had been spotted by our regular operators on previous days and they had seen squadrons of them, many of them together.” So, did these UFOs anticipate the Navy’s scheduled maneuvers and intentionally show up there for the Nimitz’ Navy personnel to see them? “They would have known the Navy was doing maneuvers there and they didn’t seem to care that they were seen,” says Tessman.

• “And not only that, but the Tic Tacs engaged in a cat-and-mouse kind of game,” Tessman continues. “Commander Fravor said that he was chasing one of them and it ended up behind him. All of a sudden it flew back over him. [T]hese seem like hotshot military pilots on both sides.” Because of this, Tessman “psychologically profiled” the behavior of this chase and said she saw it as a “cat-and-mouse game” between two competitors which she says is “so human”. This indicates to Tessman that the intelligence piloting the mysterious craft is not only humanlike but actually human – our own species time travelling from the future to observe its history. Or they may be human-like Artificial Intelligence, or ‘AI’ doing this.

• “[The Tic Tac UFO pilots] show pride and arrogance like the fighter jet pilots do…” On the other hand, if aliens had been piloting the UAPs, Tessman thinks things would have gone differently. “[W]e don’t know how [the aliens] would act. They might fire on the jet pilots or they might be so peaceful that they’d be totally upset at the maneuvers the jet pilots were doing, chasing them and all, and they might just leave. …But these Tic Tacs didn’t leave. They seemed to expect it. I wonder if possibly they want disclosure now, if the time has come …that the Tic Tacs are saying ‘here we are.’”

The USS Nimitz “Tic Tac” UFO could actually be piloted by humanlike AI or living humans “not from this Earth”, according to a UFO researcher.

Diane Tessman, the author of Future Humans and the UFOs , explained that the USS Nimitz returned to same

space year after year and entire “squadrons” had been seen on radar shortly before the encounter.

The Nimitz UFO has officially been classified as a UAP – or “unidentified aerial phenomena” – by the US Navy in a move that caused shockwaves around the UFO research world.

Diane told Daily Star Online: “The Navy did manoeuvres in Southern California between San Diego and Tijuana every year there and these Tic Tacs had been spotted by our regular operators on previous days and they had seen squadrons of them, many of them together.

“They would have known the Navy was doing manoeuvres there and they didn’t seem to care that they were seen and not only that but the Tic Tacs engaged in a cat-and-mouse kind of game.

“And so I profiled the Tic Tacs in a forensic profiling manner and I said their behaviour seems to be human to me.