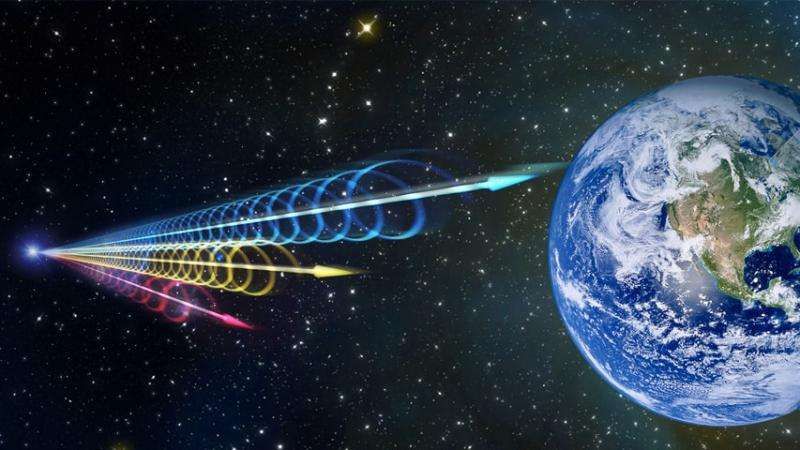 Something in Space is Sending Earth Signals Like Clockwork, Scientists Don’t Know Why

• An international team of astronomers at the Canadian Hydrogen Intensity Mapping Experiment Fast Radio Burst Project (CHIME) in British Columbia has discovered a radio source 500 million light years from our solar system that is sending out fast radio bursts like clockwork. The FRBs come in 16.35 day cycles, with 1-2 bursts per hour over a four day period and then 12 days of silence before starting up again.

• The mystery signal, known as FRB 180916.J0158+65, was first discovered in 2017, but has continued repeating steadily although more faint. Of the more than 150 fast radio bursts recorded by observatories over the last fifteen years, only ten of them have repeated. None of them are as steady as this one. And only a handful of them have been tracked back to the galaxy they came from. This one comes from a star-forming galaxy about 500 million light years from Earth.

• Scientists provided several possible explanations for what may be causing the phenomenon. It may be an object orbiting a sun which sends signals out only at a certain interval in its orbit. It could be a signal sent by a binary star system made up of a massive star and super-dense highly magnetized neutron star. Or it could be a stand-alone object caused by rotation or wobbling, such as a highly magnetic neutron star. But there’s no ruling out that this could be an alien life-form attempting to make contact with other lifeforms in the galaxy.

A new study by an international team of scientists led by astronomers at the Canadian Hydrogen Intensity Mapping Experiment Fast Radio Burst Project (CHIME/FRB) in British Columbia has discovered that a mystery radio source in a galaxy some 500 million lightyears from our solar system is sending out fast radio bursts like clockwork in 16.35 day cycles, including 1-2 bursts per hour over a four day period and then 12 days of silence before starting up again.

The discovery is important, because out of the 150+ fast radio bursts recorded by Earth-based observatories over the last decade and a half, only ten of them have repeated, and none as steadily as the source discussed in the study. Furthermore, only a handful of them have been tracked back to the galaxy they came from.

The mystery signal, known as FRB 180916.J0158+65 was first discovered in 2017, but has continued repeating steadily, albeit at a rate some 600 times fainter than the first bright flare. In their study, scientists analysed 28 bursts which took place between September 2018 and October 2019, confirming the pattern, and excitedly concluding “that this is the first detected periodicity of any kind in an FRB source.”