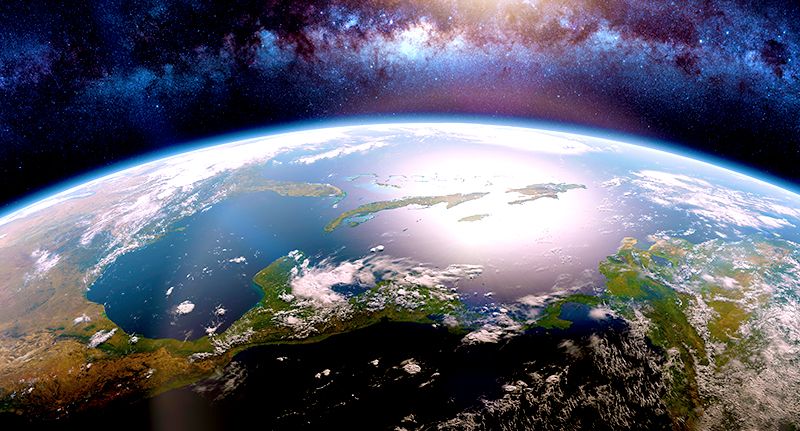 Pentagon UFO Briefing Spreads, But How Likely Is Extraterrestrial Life?

• As the US Navy is revealing information about encounters with UFOs, the question of life on other planets may warrant new examination from a scientific perspective.

• “There are possibly as many as about one Earth-like planet [orbiting] around every three Sun-like stars,” says Dr. Laird Close, Professor of Astronomy and Astrophysics at The University of Arizona. “We know that there are about 74 such Sun-like stars out to some 32 light years. That means… there should be on the order of 20-some, Earth-like planets within 32 light years of the Earth.”

• Dr. Close said that some planets in nearby star systems are near enough that we can use scientific instruments and methodology to detect whether or not they currently have or have ever had living microorganisms on them. Finding simple microbial life would “be a hallmark occasion for humanity,” says Dr. Close.

• The odds of finding intelligent life on other planets could be significantly lower than those of finding simple life. The likelihood is far less that an exoplanet would maintain a stable environment long enough for single-celled organisms to evolve into intelligent creatures, as it has done on this planet.

• Dr. Close relies on a book called Rare Earth by University of Washington geologist Peter Ward and astronomer Don Brownlee which requires that a habitable star system must have a ‘sun’ that is similar in size, type, and position in the galaxy to that of the Earth. “These, as we have seen, have been key to keeping the Earth stable for life for so long,” Dr. Close said.

• To make conditions on other planets even less likely to harbor life, Dr. Close further distinguishes the Earth by its having a Moon that stabilizes the spin axis of the Earth and helps create tide pools, and having Jupiter as a shield protecting the innermost planets from incoming impacts.

• When it’s all boiled down, Dr. Close gives the odds of finding another Earth-like planet in an Earth-like solar system is 1 in a million. With about 100 billion stars in our galaxy, and about 1.5 billion planets in the “habitable zone”. With 1 in a million odds of a planet with Earth-like conditions, and that leaves between 150 and 1,500 planets in the galaxy that might support life. Further qualifications like Earth’s hot core, tectonic plates, proper placement in the galaxy, and so on greatly reduce that number. “According to a strict interpretation of the Rare Earth hypothesis, you would probably only expect there to be three to 30 truly Earth-like photocopy planets in our galaxy right now,” reasons Dr. Close.

• [Editor’s Note]   Dr. Close has found an obscure scientific study that allows him to narrow down the number of planets in the galaxy inhabited with lifeforms to three. He should be called Dr. Close Minded. First of all, mainstream science presumes that humans evolved from a primordial soup without any intervening assistance. Secondly, why is it that astrophysicists insist that the existence of extraterrestrial life depends on finding a planet that is just like our own, positioned in its solar system just like our own? Isn’t it more likely that a being will adapt to its planetary environment, or that the species is actually created for those conditions? It’s not a coincidence that the biology of a human being is naturally suited to this planet. Other intelligent beings surely inhabit planets naturally that are not particularly suited to humans. This narrow view of life in the galaxy simply supports the Deep State agenda of denying that intelligent extraterrestrial life exists anywhere else in the galaxy, and concealing that this planet has long maintained a widespread extraterrestrial presence, especially since World War II.

Most people are likely to have seen a fictionalized depiction of alien life by the time they reach adulthood, and these depictions are often caricatured. Science fiction novels and films, cartoons, video games, television series, and other media have told stories for quite some time of “little green men” visiting our planet for benevolent or malicious purposes. However, with the Pentagon ramping up its release of classified information about alleged naval encounters with UFOs to various government officials, the question of life on other planets may warrant new examination from a scientific perspective.

When we discuss life on other planets, microbial life may be more probable than it is exciting, but it’s a valid point of discussion. “There are possibly as many as about one Earth-like planet [orbiting] around every three Sun-like stars,” said Dr. Laird Close, Professor of Astronomy and Astrophysics at The University of Arizona. “We know that there are about 74 such Sun-like stars out to some 32 light years. That means if we optimistically keep the ratio of about 30 percent, there should be on the order of 20-some, Earth-like planets within 32 light years of the Earth.”

Dr. Close said that some planets in nearby star systems are near enough that we can use scientific instruments and methodology to detect whether or not they currently have or have ever had living microorganisms on them. Should we find that they do, it would be a good indicator that much of the universe is brimming with simple life.

“It’s a very exciting quest for science and if we discover this it will be a hallmark occasion for humanity,” he added.

On the other hand, the odds of intelligent life on other planets could be significantly lower than those of simple life. This is partly because of the amount of time it took for single-celled organisms to evolve into intelligent creatures. The corresponding likelihood—or lack, thereof—of other planets maintaining stable environmental conditions for that long isn’t very optimistic.

Dr. Close cited a book called Rare Earth by two University of Washington scientists—geologist Peter Ward and astronomer Don Brownlee—that details the factors needed for intelligent life to spring up on Earth, according to the “Rare Earth Hypothesis.” “First of all, our Sun is in the right part of the galaxy,” Dr. Close said. “It is not too close to the crowded center, nor does it exist way out on the element-poor fringe of our galaxy. This seems to be an important factor.”