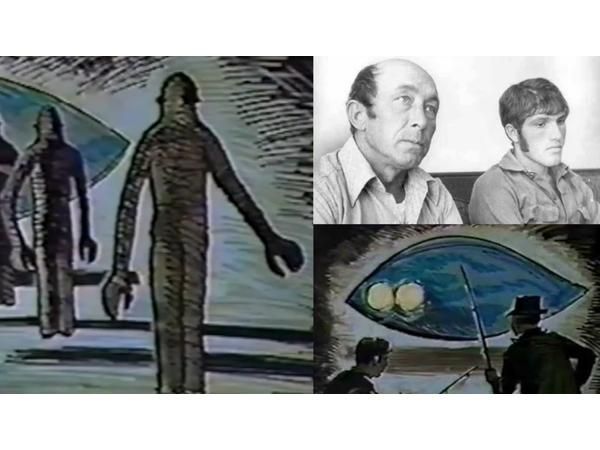 • On Oct. 11, 1973, Calvin Parker and Charles Hickson were fishing on the bank of the Pascagoula River in Pascagoula, Mississippi when the men claimed that they were abducted by floating, lobster-clawed aliens. They immediately reported the incident to the Jackson County Sheriff’s Office. During their initial interview, Sheriff Fred Diamond and Captain Glenn Ryder secretly recorded the conversation.  (find link to 30:38 minute Sheriff’s recording in Editor’s Note below)

• The ‘secret audio tape’ was kept on file at the Sheriff’s Office. Earlier this year, Parker had been speaking with a Pascagoula police officer. “I’d been talking with him on the internet. He just showed up at my house,” said Parker. The officer gave Parker copies of the secret recording. The police officer told Parker that he had fielded roughly 50 phone calls that same night from people claiming to have seen something unusual in the sky.

• “When I sat down and listened to it, it hit me how real all of this was,” Parker said. Parker was not aware at the time that he and Hickson’s conversation was being recorded. “It kind of choked me up a little bit. I’d never heard it — not the full recording — just the piece where Charlie and I were locked in the room and they walked out. I was surprised they had the whole thing on tape.”

• News of the event thrust the two men into the media spotlight. Parker tried to distance himself from unwanted attention. But later on, Parker felt he needed to tell his story and he published a book in 2018 detailing his experience. Now, the 47-year-old story continues with release of the interview recording.

• In a 2018 interview with the Clarion Ledger newspaper, Parker recalled that he noticed blue light reflecting off the water. When Parker looked up, “a big light came out of the clouds.” The light was coming from a craft like nothing he’d ever seen. “[I]t looked like it was shaped like a football,” said Parker. “[J]ust estimating, (it was) about 80-foot. (It made) very little sound. It was just a hissing noise.” Then three legless creatures floated from the craft. One had no neck with gray wrinkled skin. Another had a neck and appeared more feminine. Parker described their hands as being shaped like mittens or crab claws.

• One of the creatures put a claw around Parker’s arm. At first he was terrified, but then another feeling came over his body. “I think they injected us with something to calm us down,” Parker said. “I was kind of numb and went along with the program.” The creatures held his and Hickson’s arms and floated them into the craft where examinations were performed on the two. Then they were returned to the bank of the river.

• Hickson, who has since died, tried to explain what happened and what he saw during the 1973 sheriff’s interview, including going into the craft. “[T]hey glided me into that thing,” Hickson said. “All of us moved like we were floating through air. When I got in there they had me. …There were no seats, no chain, they just moved me around. I couldn’t resist them. I just floated, felt no sensation, no pain. They kept me in that position a little while, then they’d raise me back up.”

• Hickson described the aliens as being about five feet tall with a single ‘leg and foot-like appendage’ without toes. He said they had what appeared to be ears, a nose and a mouth, but none of the features looked human. He was so scared he couldn’t remember if they had eyes, or the details about leaving the craft. “The only thing I remember is that kid, Calvin, just standing there,” Hickson said. “I’ve never seen that sort of fear on a man’s face as I saw on Calvin’s. “It took me a while to get him back to his senses.”

• Captain Ryder, now retired, didn’t believe any of Hickson’s story. “I wasn’t really impressed with them,” Ryder said. “You have people trying to get notoriety and I thought they were trying to get notoriety with a spaceship.” So while Parker and Hickson were alone, the officers left the hidden audio recorder on. What was recorded changed Ryder’s mind. The two talked about fear, sleeplessness and needing to see a doctor among other things. Hickson can be heard in the recording saying, “Jesus Christ, God have mercy, I thought I’d been through enough of Hell on this earth and now I’ve got to go through something like this, see.” Hickson said. “But …they could have harmed us, son. They had us. They could have done anything to us, but they didn’t hurt me.”

• The 18 year old Parker, however, spoke mainly about his anxiety. “I just want to cry right now,” Parker said in the recording. “What’s so damn bad about it is nobody’s going to believe us. I got to get home and get to bed and take some nervous pills or something, see a doctor or something. I can’t stand this. I’m about to go all to pieces. I can’t sleep like it is. I’m damn near crazy.” Ryder said, “He was genuinely scared. He was telling Charlie, ‘Don’t talk to the deputies. They’ll come back and get us.’ They didn’t make it up. I can guarantee that.”

• [Editor’s Note]   Listen to 11:20 minute audio of Calvin Parker’s hypnosis session with Budd Hopkins in 1974 below. Also, check out these three previous ExoArticles on the 1973 Pascagoula abduction incident here, here and here.

Listen to the 30:38 minute Pascagoula Sheriff’s audio recording of Hickson and Parker just after the lobster-clawed alien creature abducted them in 1973.

they were abducted by aliens. Recently, a recording, said to be made that night of what they told Sheriff Fred Diamond and Capt. Glenn Ryder, has surfaced.

“It was about the time the coronavirus hit,” Parker, of Moss Point, said of when he received two copies of the recording. “I’d been talking with him on the internet. He just showed up at my house.”

Parker explained the man who gave him copies of the recording was an officer with the Pascagoula Police Department on the night the abduction occurred, but does not want to be identified. Parker said the officer was involved because he fielded roughly 50 phone calls that night from people claiming to have seen something unusual in the sky.

“When I sat down and listened to it, it hit me how real all of this was,” Parker said. “It kind of choked me up a little bit.

and they walked out. I was surprised they had the whole thing on tape.”

At the time, Parker said he did not know there was a recorder in the room.

“I had no idea,” Parker said. “Apparently, Charlie didn’t, either. They was all hid.”

The interview took place on Oct. 11, 1973 after Parker and Hickson claimed they were abducted by aliens while fishing from the bank of the Pascagoula River. News of the event thrust the two into the media spotlight and put the town of Pascagoula on the map. It was unwanted attention for Parker, who tried to distance himself from it.

However, events in Parker’s life led him to feel he needed to tell his story and he published a book in 2018 detailing his experience. Once again, the event became the center of attention for many and Clarion Ledger published stories about the book and other people claiming to have witnessed unidentified objects in the sky that night.

Now, the 47-year-old story continues with release of the interview recording.

‘It was a blinding light’

In a 2018 interview with the Clarion Ledger, Parker said he noticed blue light reflecting off the water and his initial thought was law enforcement officers had arrived to tell the two fishermen they needed to leave the property. However, when Parker looked up, he realized the light was coming from a craft like nothing he’d ever seen.

“A big light came out of the clouds,” Parker said. “It was a blinding light.

“It was hard to tell with the lights so bright, but it looked like it was shaped like a football. I would say, just estimating, (it was) about 80-foot. (It made) very little sound. It was just a hissing noise.”

Parker said three legless creatures floated from the craft. One had no neck with gray wrinkled skin. Another had a neck and appeared more feminine. Parker described their hands as being shaped like mittens or crab claws.