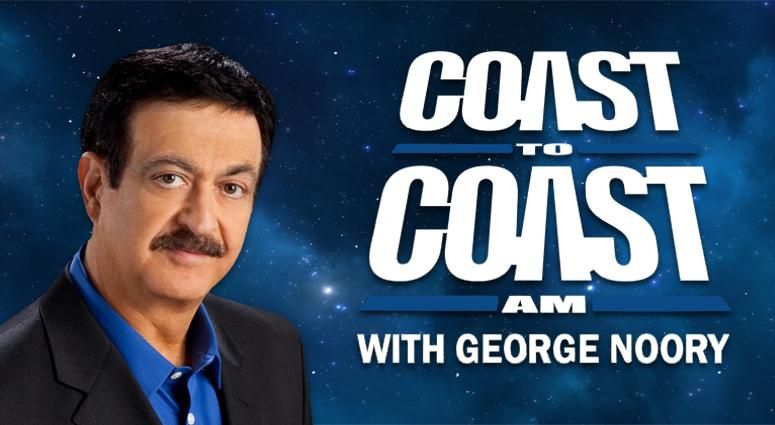 • The late-night radio talk show Coast to Coast AM is syndicated on 620 radio stations in the U.S. and Canada. The show also includes a podcast, a YouTube channel, a website, and a streaming service for ‘Coast insiders’. George Noory (pictured above), the popular host of Coast to Coast AM, spoke with George Knapp about the show in the first of a two-part interview.

• Noory points out that the show’s content has changed a little bit from the primarily paranormal content when Art Bell was doing the show. In addition to the usual fare of UFOs, alien abductions, and ghost stories, Noory has expanded into covering other conspiracies such as ‘alternative medicine’ and vaccines. “I try to… be a facilitator of getting the answers or the truth out without picking sides, without being judgmental, without hanging up on a caller,” says Noory. “I just try to do it the way I would want to be treated. And it seems to work for me.”

• Noory started out as the news director at a radio station in St. Louis, then an executive producer in Detroit, then the news director in Minneapolis. Today, his mainstream contemporaries appreciate and respect that Noory can cover some bizarre things in a professional manner. Noory is in the office from 1:00 pm to 2:00 am, five nights a week. He credits his crack production staff that “gets the guests, does the work and keeps me going.”

• “Years ago, the mainstream media would laugh at UFO stories,” says Noory. But since the topic has moved into the mainstream after the New York Times article in December 2017, “people aren’t laughing like they used to. They’re starting to be a little more serious, like, ‘Oh my gosh, maybe it is real. Maybe it is happening’.”

George Noory, weekday host of the late-night radio talk show Coast to Coast AM, talks about the program’s success with investigative reporter George Knapp. The program is syndicated to hundreds of radio stations in the U.S. and Canada by Premiere Networks. Previously unaired 2019 interview. First of 2 Parts.

George Knapp: George, the show, could you describe the parameters, how popular it is, how big it is now. I mean, it used to be a radio show. And now it’s much more than that.

George Noory: It’s become a phenom, George. We’re on 620 radio stations in North America, which includes Canada, which is probably the highest affiliated show in the country. It’s huge. We’re podcasting. We’re on YouTube now. We’re on the internet. We stream with the Coast Insiders. It’s become a huge program. And the content has changed a little bit from the days when Art Bell was doing the show. Where he was primarily paranormal, I tweaked it a little bit into conspiracies and issues that are affecting us as humans. Alternative medicine. Do we get vaccines? Do we not? And the programs just continue to take off.

Knapp: You know, I get emails as you do … just overwhelmed with the emails from listeners … they’re an opinionated bunch. They don’t keep their opinions to themselves. And they will offer suggestions to me. When they don’t like a show, they’ll tell me. The realization hit me years ago: You can’t please everybody all the time. You’re going to have people who like it, who don’t like it. It’s like riding a Brahma bull. You make it sound easy, but it’s not easy.

Noory: Johnny Carson once said, “I don’t do politics. And the reason I don’t is I don’t want to tick off 50% of my viewers.” I’m the same way. What I try to do is be a facilitator of getting the answers or the truth out without picking sides, without being judgmental, without hanging up on a caller. I just try to do it the way I would want to be treated. And it seems to work for me.