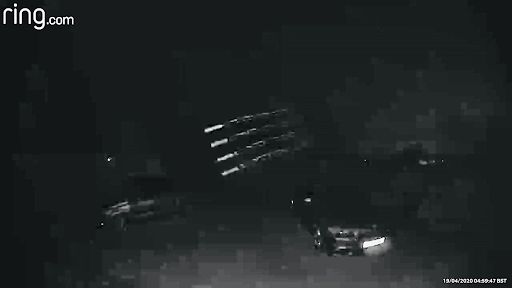 • On April 19th, Adam McCann was staying with his family at his country home in Ottery St Mary, Devon, England. He woke to find that his closed circuit television security camera outside of the house was indicating that it had captured movement just before 5am that night. When McCann looked at the video he saw four objects flying in perfect formation across his driveway. (see 43 second video below)

• It began when two fluorescent objects shot from a tree and careered towards the house. The two UFOs then became four and followed an identical path as they zigzagged above the family’s cars. Leaving a sparkling tail behind them, the four flying objects shot through the sky before disappearing in the fields.

• The 47-year-old McCann shared the clip online with the caption ‘the aliens have landed’, and admitted to pals that the footage had left him ‘totally freaked out’. Said McCann, “I just thought ‘what the hell was that’. I’ve watched it back a few times now to try and work out what’s going on but I haven’t had any luck so far.” “We live out in a rural area, nowhere near a main road, so it doesn’t pick up any car lights or people walking around in the dark.”

• McCann continued, “It’s just the fact that they’re all flying in formation with the trails behind them that look like smoke trails. Two of them seem to hit my daughter’s car and the other two appear to fly over the wall and disappear.” “You can see the dots in the tree first and then suddenly they’ve moved and are above our cars. It was all over so quickly.”

night – leaving him to quip ‘the aliens have landed’:

Adam McCann was concerned when he woke up on 19 April and his Ring camera flagged there had been some movement outside his country home in Ottery St Mary, Devon, just before 5am.

However, when the dad-of-two checked the footage back he was left confused when a pair of bright lights shot from a tree opposite the house and through the pitch black sky.

As they careered towards the house, the number doubled and the fluorescent foursome followed an identical path as they zigzagged above the family’s cars.

Leaving a sparkling tail behind them, the four flying objects shot through the sky before disappearing in the fields opposite social care support worker Adam’s home.