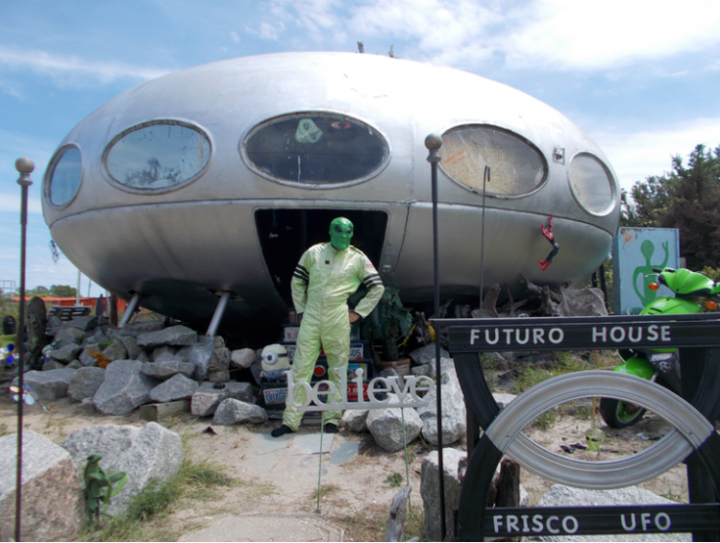 • The San Francisco-based True People SearchNational compiled the rankings of US cities with the most UFO sighting reports sent to the National UFO Reporting Center in Davenport, Washington. Founded in 1974, NUFORC offers both an online form and a telphone hotline for people in the US and Canada to add their ‘objective UFO data’ to a public database.

• The True People website analyzed more than 80,000 reported UFO sightings, and then narrowed it down to 446 cities with 25 or more sightings over a 114 year period, through 2014. Seattle topped the list of major cities with 620 sightings, more than double second-place Phoenix. Charlotte, NC and Jacksonville, Florida were the only Eastern US cities making the top ten.

• Nationwide, “lights have been reported to move in weird patterns, flash, appear and disappear, display in a formation, and more. While some lights can be explained as an aircraft originating from Earth, a meteor, or satellites, some reports have remained shrouded in mystery,” says Mitchell Barrick, content director for True People Search Insights.

• Charlotte’s 153 sightings of mysterious lights, discs and orbs in the sky since 1910 ranked ninth among the 25 largest cities by population. ‘Unexplained light in the sky’ is the most commonly reported type of UFO in the US, “and this holds true for Charlotte,” said Barrick. Other commonly reported objects in the US include triangles, circles, fireballs, disks, sphere, snake-like UFOs (cigars and cylinders), chevrons, eggs and cones.

• According to Barrick, “[I]t’s our theory that a higher frequency of sightings correlates with a higher percentage of reports from people who believe they have genuinely seen something in the sky that they cannot explain: a UFO.”

• Peter Davenport, director of the National UFO Reporting Center, said NUFORC has received a spate of recent UFO reports from the Carolina coast. People have reported red, orange, yellow, amber and gold lights in the sky above the Atlantic Ocean – lights with no earthly explanation. For instance, on August 18, a retired senior law enforcement official in Conway, SC saw a tiny, white colored, strobing light fly overhead from NNE to SSW. The object is joined by a second similar object, and then two more, for a total of four objects. (see 1:52 minute video below) “Because of the strobing, and because of the direction the objects were traveling, the witness doubted whether they could have been ‘Starlink’ satellites.”

• Another phenomena associated with the Carolinas for over a century are mysterious apparitions known as the ‘Brown Mountain Lights’ which have been reported in the North Carolina highlands. In summer 2016, a scientific team from Appalachian State University captured on video a bright orb that “suddenly appeared and then vanished” high above a Brown Mountain ridge. “Then it came back, same spot,” The Charlotte Observer reported. “And then an encore.”

Charlotte has managed to beam itself up into the ranking of the top 10 largest North American cities for total UFO sightings in the past century, a new study shows.

And other cities in the Carolinas made related lists for sightings per capita, including Wilmington, Asheville and Myrtle Beach.

The Queen City’s 153 sightings of mysterious lights, discs and orbs in the sky since 1910 had Charlotte ranked ninth among the 25 largest cities by population and tops in North Carolina. That’s according to San Francisco-based True People Search, which compiled the rankings based on sightings people sent to the National UFO Reporting Center in Davenport, Wash.

Founded in 1974, the non-profit center maintains a public database of “objective UFO data,” according to its website. It offers an online form and telephone hotline to report sightings.

The people-finder website analyzed more than 80,000 reported UFO sightings in the U.S. and Canada. It then narrowed the list to 446 cities with 25 or more total sightings over 114 years, through 2014, Mitchell Barrick, content director for True People Search Insights told The Charlotte Observer in an email Wednesday.

Seattle topped the list of major cities with 620 sightings, more than double second-place Phoenix. Jacksonville, Fla., was the only other Eastern U.S. city in the top 10, falling just one sighting shy of Charlotte’s overall total.