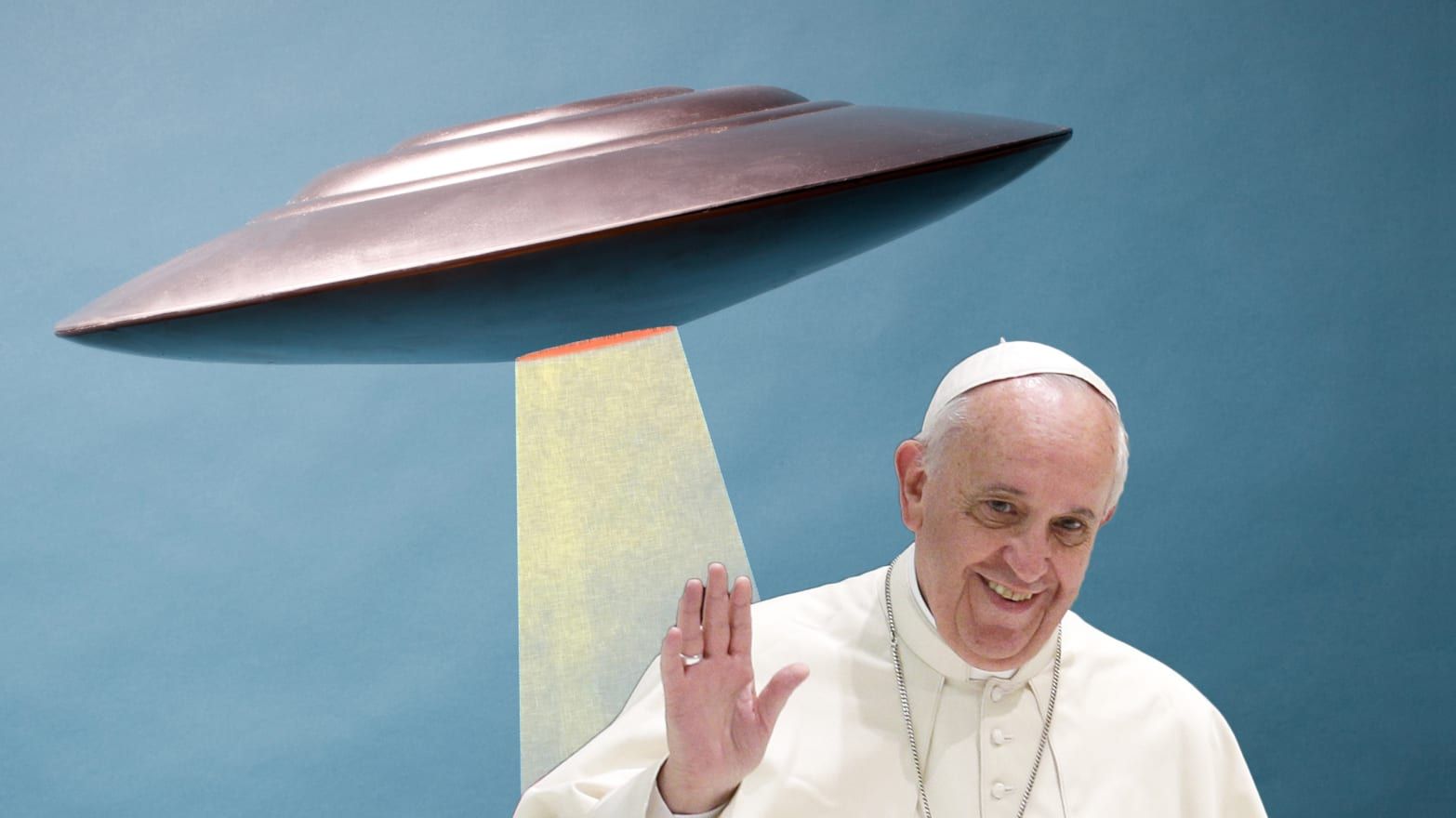 Belief in Aliens Not So Far Out for Some Catholics

• Jesuit philosopher and astronomer, Father Jose Funes, has been appointed to the advisory council of METI International. Father Funes will join over 80 experts that make up the advisory council. METI’s president and founder, Douglas Vakoch, said, “It’s natural for METI to be in dialogue with Jesuit astronomers because they understand the science behind our search, giving us common ground, while also having expertise in theology, providing a new perspective for our scientists.”

• METI, or “Messaging Extraterrestrial Intelligence”, is an offshoot of SETI, “Search for Extraterrestrial Intelligence” which began its search for ET in 1959 by scanning the sky for unusual radio and laser signals from sources that may indicate signs of alien technology. METI looks at what and how to communicate in a vast and mysterious universe.

• The Vatican has also been active in discussions about extraterrestrial life, the ethics of space exploration and the religious significance of a universe that could be teeming with life. Father Funes is the former director of the Vatican Observatory and an expert in galaxies and extragalactic astronomy.

• Father Funes, who holds the chair in science, religion and education at the Catholic University of Cordoba, Argentina, and also chairs a think tank initiative called “OTHER”, says that these Catholic organizations help us to understand alien life “in order to understand better who human beings are”. This is instrumental in educating the general public, teachers and students about the dialogue between science and religion.

• Vakoch is an astrobiologist and psychologist who spent 16 years at the SETI Institute, where he was director of Interstellar Message Composition. Vakoch says that if METI/SETI does find life out there someday, “many people will look to their religious leaders to help understand what it means to all of us down here on planet Earth.” “One of the great misconceptions of the general public is that discovering life beyond Earth will threaten people’s religious beliefs,” Vakoch says. “But time and again, across the centuries, we have seen that religions adapt to scientific discoveries. The same will be true if someday we discover we’re not alone in the universe.”

• Father Funes has introduced “something new or at least original” for SETI research to consider: the search for spiritual signs or signatures in the universe. Is spirituality a part of our evolutionary process? Vakoch said that “Hollywood portrayals of marauding aliens, coming to Earth to annihilate us” serve to generate fear or negative reactions to potential alien life. But there are “hopeful depictions of first contact,” says Vakoch, such as Steven Spielberg’s ‘E.T. the Extraterrestrial’ where a visitor comes to Earth, transforming lives and overcoming death through love. The same for ‘Starman,’ starring Jeff Bridges in the title role that was a thinly veiled reference to Christ.”

• Father Funes said the Catholic Church is optimistic in its faith because “we trust in God” when it comes to space exploration and messaging potential intelligent life. Vakoch says, “Some worry that learning about the existence of extraterrestrials will make humanity less unique. I suspect just the opposite will happen.” “[T]here will never be a duplicate of Homo Sapiens. There may be beings out there who are more wise or powerful than we are, but they will never be more human.”

More than 2 million people RSVP’d to a recent social media invitation to “storm” Area 51 in Nevada, in the hope of discovering whether alien life or spacecraft may be secretly stored at this U.S. Air Force base.

Though the proposed raid was a spoof, it has morphed into a real, more peaceful encounter. Now dubbed, “Alienstock,” the Sept. 20-22 festival aims to be a place “where believers gather” to discuss and celebrate confidence in the existence of alien life and the wonders of the unknown, according to its website, alienstockfestival.com.

But another brand of believers — a “Men in Black” of a spiritual kind — are the pope’s own Jesuit astronomers; they have long been active in discussions about extraterrestrial life, the ethics of space exploration and the religious significance of a universe that could be teeming with life.

The huge amount of interest the general public has shown in life existing elsewhere in the universe is part of the age-old question, “Are we alone?” said Jesuit Father Jose Funes, former director of the Vatican Observatory and an expert in galaxies and extragalactic astronomy.

The fascination with seeking extraterrestrial life or intelligence “reflects very deep human issues that are important for us” and makes people think about “who we are,” he told Catholic News Service in late August.

“We have to become alien somehow” and step outside oneself “in order to understand better who human beings are,” said the priest, who holds the chair in science, religion and education at the Catholic University of Cordoba, Argentina. The chair and the think tank initiative, “OTHER,” he directs are instrumental for educating the general public, teachers and students about the dialogue between science and religion, he said.

Father Funes’ multidisciplinary expertise in astronomy, philosophy and theology has now earned him a unique place in ET research — serving on the advisory council of METI International.

The SETI project, which started in 1959, represents a major coordinated effort in scanning the sky for unusual radio and laser signals from sources that may indicate signs of alien technology. METI looks at what and how to communicate in a vast mysterious universe.

Part of the METI mission, according to its website, METI.org, is to conduct high-level scientific and multidisciplinary research, discuss the importance of searching for life beyond Earth and study the impact searching for, detecting or messaging ETI would have on the world.

More than 80 experts from a huge array of fields — including ethics, linguistics and theology — make up METI’s advisory council, and it was just last year that the group’s president and founder, Douglas Vakoch, asked Father Funes to join the team.