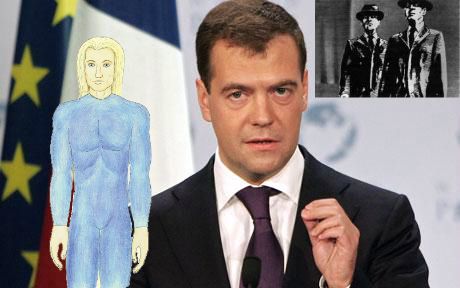 Prime Minister Dmitry Medvedevâ€™s off-air comments that Russian Presidents are given a secret file about extraterrestrials living among us created much media interest. Most news reports claimed that Medvedev was simply joking. His apparent reference to the Men In Black movie as a source of information on a super secret agency that monitors extraterrestrials on Earth was commonly cited as key evidence that he was in fact joking. Â The reasoning is that no political leader would refer reporters to a comedy to clarify national policy. It has now emerged that Medvedev was not referring to the Men in Black comedy after all, but to a recent Russian television documentary titled â€œMen in Blackâ€ that reveals many details about an extensive cover up of extraterrestrial life visiting Earth.

After completing an on-air interview with five television reporters on December 7, 2012, Prime Minister Medvedev continued to respond to reporters and made some off-air comments without realizing that the microphone was still on. He was then asked by one reporter if â€œthe president is handed secret files on aliens when he receives the briefcase needed to activate Russia’s nuclear arsenal,â€ Medvedev responded:

Along with the briefcase with nuclear codes, the president of the country is given a special â€˜top secretâ€™ folder. This folder in its entirety contains information about aliens who visited our planetâ€¦ Along with this, you are given a report of the absolutely secret special service that exercises control over aliens on the territory of our countryâ€¦ More detailed information on this topic you can get from a well-known movie called Men In Blackâ€¦ I will not tell you how many of them are among us because it may cause panic.

After giving his detailed comments to the reporter on extraterrestrials, Medvedev was translated as follows in a Reuterâ€™s report: â€œMore detailed information on this topic you can get from a well-known movie called â€˜Men In Blackâ€™â€.Â  The Reuters translation was used by a number of media sources in concluding that Medvedev was joking, and his comments needed to be taken with a grain of salt. For example, one reporter said:

â€¦ before Russian alien conspiracy theorists can say â€œtold you so,â€ the Russian PM quickly indicated that his comment was a joke. â€œMore detailed information on this topic you can get from a well-known movie called â€˜Men In Black,â€™â€ he said.

However, a more accurate translation of what Medvedev actually said about the Men in Black phenomenon was: â€œYou can receive more detailed information having watched the documentary film of the same name.â€Â  So Medvedev was referring to a Russian â€œdocumentary filmâ€ titled Men in Black, not the Hollywood blockbuster by the same name. Since the Russian documentary was recent and not well known outside of Russia, most Western media accepted the Reuterâ€™s translation. The documentary was translated into English and released on Youtube on December 18, 2012.

Itâ€™s true that while Medvedev was giving his detailed response to a female reporterâ€™s question on extraterrestrial life, the reporter was broadly smiling, and other reporters could be heard laughing in the background. Yet Medvedev appeared very serious throughout his elaborate response, and did not appear to be joking. So was Medvedev referring to the Men in Black Hollywood comedy to, at best, reveal valid information to the reporter using dry humor? Or was Medvedev instead giving a candid admission about Russian Presidents being given a secret briefing paper on a secret agency created to monitor extraterrestrials living among us, and referring to a recent Russian documentary for the reporter to follow up?

In the Russian Men In Black (MIB) documentary, a number of prominent UFO cases in Russia and the USA are discussed. The Roswell UFO crash is covered, along with a number of extraterrestrial abduction cases, and UFOs disabling nuclear weapons facilities. The documentary examines testimony that extraterrestrial bases have been established on Earth, and that some are in restricted US military areas with the full knowledge of the Pentagon. The documentary even goes on to seriously discuss President Eisenhowerâ€™s alleged meeting with extraterrestrials, where agreements were reached with some of the visitors giving them permission to take some of the Earthâ€™s resources in exchange for advanced technology. If Medvedev wanted the female Russian reporter to explore some of the information he was revealing, then it makes sense that he was in fact referring to the Russian MIB documentary.

This leads to an incredible conclusion. If Medvedev was in fact referring to the Russian MIB documentary, then he was implicitly endorsing information that extraterrestrials have established bases on remote US military facilities with Pentagon approval. Even more startling is that Medvedev was endorsing the claim that President Eisenhower had in fact met with extraterrestrials, and reached agreements for advanced technologies to be traded for planetary resources. Initial media reports of Prime Minister Medvedevâ€™s off-air comments were simply unaware of a Russian documentary titled Men In Black, and wrongly concluded that he was referring to the MIB comedy. As the translated text of his comments now makes clear, Medvedev was referring to a Russian documentary exposing the Men in Black phenomenon, and was candidly advising the Russian reporter to investigate some of the claims found in it to learn about a worldwide cover up of extraterrestrials among us.

This article is copyright Â© and should not be added in its entirety on other websites or email lists. Permission is granted to include an extract (e.g., introductory paragraph) of this article on website or email lists with a link to the original.