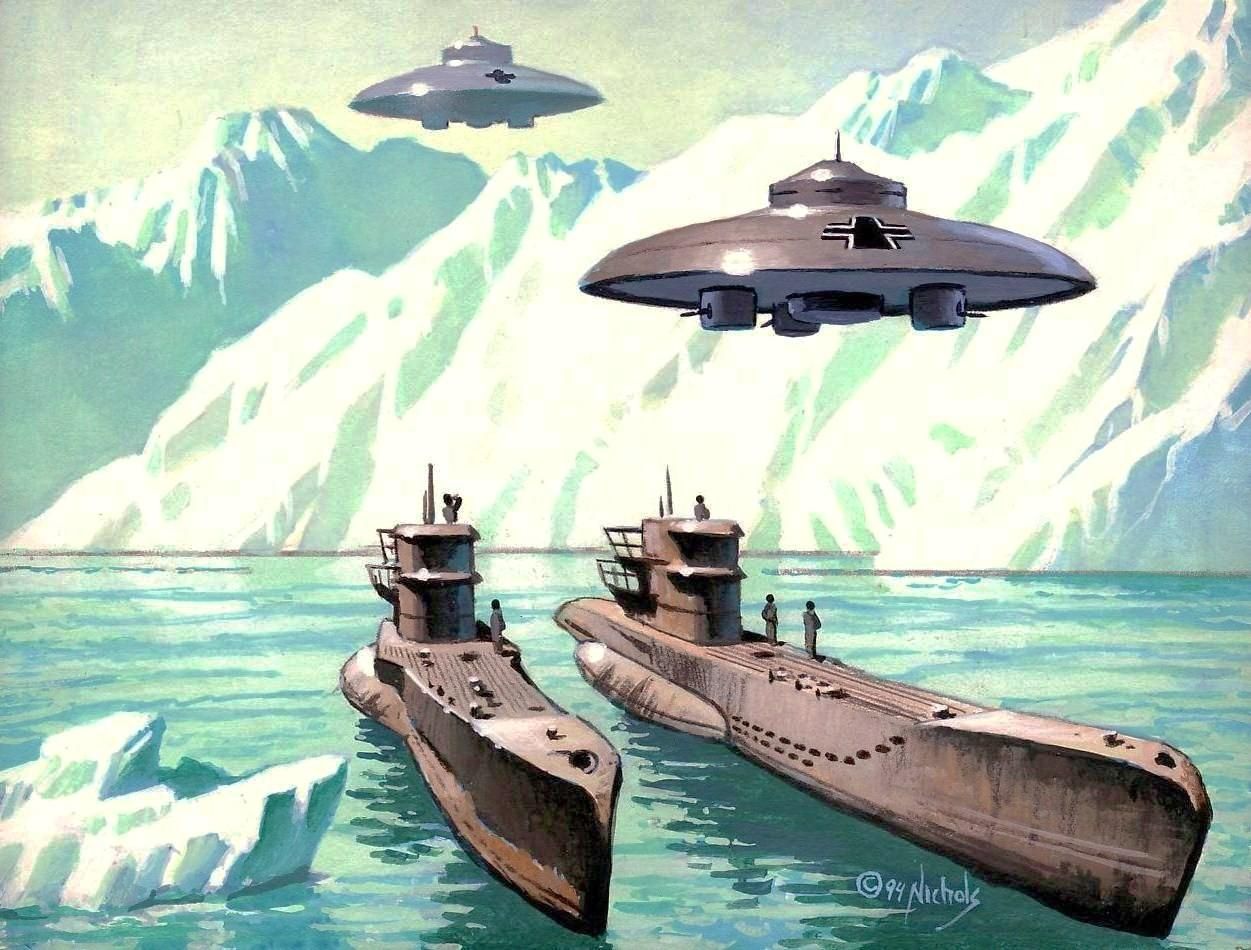 Did US Navy battle UFOs protecting Nazi Antarctic sanctuary in 1947?

An extraordinary 2006 Russian documentary was recently translated into English revealing new information about a US Navy Antarctica expedition in 1946/47. Originally scheduled for a six month period, the â€œscientificâ€ expedition was officially called â€œThe United States Navy Antarctic Development Program,â€ and given the operational name Highjump. The naval component of Operation Highjump was known as Task Force 68 and comprised 4700 military personnel, one aircraft carrier (the USS Philippine Sea among the largest of all carriers of the time), and number of naval support ships and aircraft. The Naval expedition was headed by famed polar explore Admiral Richard Byrd, who had been ordered to: â€œto consolidate and extend American sovereignty over the largest practical area of the Antarctic continent.â€ Byrdâ€™s expedition ended after only 8 weeks with â€œmany fatalitiesâ€ according to initial news reports based on interviews with crew members who spoke to the press while passing through Chilean ports. Rather than deny the heavy casualty reports, Admiral Byrd revealed in a press interview that Task Force 68 had encountered a new enemy that â€œcould fly from pole to pole at incredible speeds.â€

Admiral Byrdâ€™s statements were published in the Chilean Press but never publicly confirmed by US authorities. Indeed Byrd did not speak again to the Press about Operation Highjump, leaving it for researchers to speculate for decades over what really happened, and why Byrd was silenced. After the Soviet collapse in 1991, the KGB released previously classified files that cast light on the mysterious Byrd led Naval expedition to Antarctica. A 2006 Russian documentary, recently translated, made public for the first time a 1947 secret Soviet intelligence report commissioned by Joseph Stalin of Task 68â€™s mission to Antarctica. The intelligence report, gathered from Soviet spies embedded in the US, revealed that the US Navy had sent the military expedition to find and destroy a hidden Nazi base. On the way, they encountered a mysterious UFO force that attacked the military expedition destroying several ships and a significant number of planes. Indeed, Operation Highjump had suffered â€œmany casualtiesâ€ as stated in initial press reports from Chile. While there is a possibility the report resulted from US disinformation fed to a known Soviet mole, the more likely explanation is that the report exposes the first known historical incident involving a battle between US naval forces and an unknown UFO force stationed near Antarctica.

It is a historical fact that Nazi Germany devoted significant resources to the exploration of Antarctica, and established a prewar presence there with its first mission in the Antarctic summer of 1938/1939. According to a statement by Grand Admiral Donitz in 1943, â€œthe German submarine fleet is proud of having built for the FÃ¼hrer, in another part of the world, a Shangri-La land, an impregnable fortress.” If the fortress was in Antarctica, was it built by the Nazis, or discovered there? After the defeat of Nazi Germany, according various sources, elite Nazi scientists and leaders escaped to this impregnable fortress by Uboats, two of which experienced difficulties and surrendered in Argentina.

In the Soviet intelligence report, never before known testimony by two US Navy servicemen with Operation Highjump was revealed. A recent article in New Dawn by Frank Joseph gives a detailed analysis of the two eyewitness accounts, only the latter of which was mentioned in the 2006 Russian documentary. John P. Szehwach, a radioman stationed on the USS Brownson, gave testimony of how UFOs appeared dramatically out of the ocean depths. On January 17, 1947 at 0700 hours, Szehwach said:

I and my shipmates in the pilothouse port side observed for several minutes the bright lights that ascended about 45 degrees into the sky very quicklyâ€¦ We couldnâ€™t i.d., the lights, because our radar was limited to 250 miles in a straight line [Our Real â€œWar of the Worlds”]

Over the next several weeks, according to the Soviet report, the UFOs flew close over the US naval flotilla which fired on the UFOs which did retaliate with deadly effects. According to Lieutenant John Sayerson, a flying boat pilot:

The thing shot vertically out of the water at tremendous velocity, as though pursued by the devil, and flew between the masts [of the ship] at such a high speed that the radio antenna oscillated back and forth in its turbulence. An aircraft [Martin flying-boat] from the Currituck that took off just a few moments later was struck with an unknown type of ray from the object, and almost instantly crashed into the sea near our vesselâ€¦. About ten miles away, the torpedo-boat Maddox burst into flames and began to sinkâ€¦ Having personally witnessed this attack by the object that flew out of the sea, all I can say is, it was frightening.â€ [Our Real â€œWar of the Worlds”]

There is a major problem with Sayersonâ€™s quote. There has been no torpedo boat named Maddox in the US Navy.Â Â  In the Russian documentary, the incident described by Sayerson (misspelt Sireson) refers instead to the destroyer â€œMurdoch.â€ There was, however, no destroyer named â€œMurdochâ€ active in the US Fleet in 1947. Instead there was a destroyer named â€œMaddoxâ€ (DD-731), but it did not serve in Operation Highjump. In fact, the USS Maddox was the destroyer fired upon in the Gulf of Tonkin incident of 1964.

According to Frank Joseph the USS Maddox was â€œeither a torpedo boat, or torpedo-carrying destroyer.â€ He goes on to explain what may have happened to the Maddox mentioned in the Soviet report:

A USS Maddox was indeed sunk by enemy action, but five years earlier by a German dive-bomber during the Allied invasion of Sicily. Actually there were at least three American destroyers known by that name (DD-168, DD-622 and DD-731) all of them contemporaneous. The US Navy has long been notorious for falsifying the identity of its ships and re-writing their histories if they embarrass official policyâ€¦. So too, the â€œMaddoxâ€ cited by Soviet espionage was similarly consigned to an official memory hole. [Our Real â€œWar of the Worlds”]

If Joseph is correct, then it is very possible that a USS Maddox was destroyed during Operation Highjump, and the US Navy changed official records to hide this. An alternative explanation is that the 1947 Soviet report contained U.S. orchestrated disinformation that was being conveyed to Soviet authorities by a Soviet mole known by the US intelligence community. Though plausible, this is highly unlikely given that the US and USSR were still allies at the time of Operation Highjump, and had a common interest in finding and destroying any hidden Nazi base(s) in the South Atlantic.

The destructive technology used by the UFOs in the Soviet intelligence report was not something that had been developed by the defeated Nazis who had only shortly before been forced to retreat to the South Atlantic. It appears the UFOs were not intent on destroying Task Force 68, but forcing it to turn back. Were the UFOs protecting the retreating Nazis and/or their own presence in Antarctica? Was the Stalin era report disinformation deliberately fed to Soviet authorities by US intelligence? What is the most likely answer is that the Soviet era report released in the 2006 Russian Documentary was substantially correct. This suggests that Admiral Byrdâ€™s initial press report was accurate â€“ a new enemy that could fly from pole to pole at â€œincredible speedsâ€ had emerged. Most importantly, the UFO force had inflicted heavy casualties on the US Navy that was powerless to oppose it. The worldâ€™s first known battle between the United States military and an unknown UFO fleet based near Antarctica very likely occurred in 1947, and the general public has never learned about it until now.