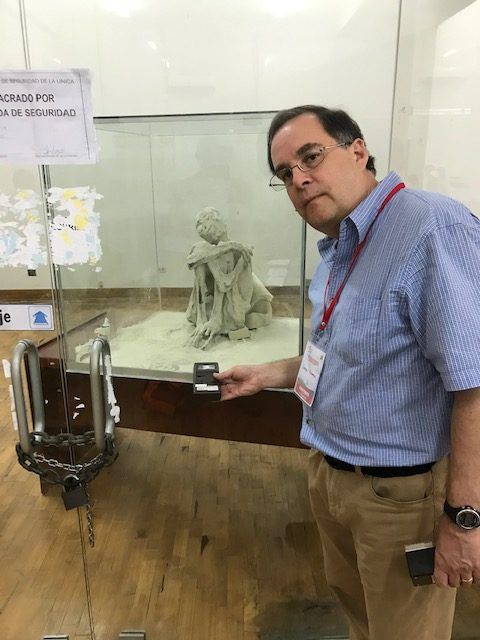 3-Finger Nazca-Palpa Mummies: A Presentation at the University

In the image above I’m trying to measure ionizing radiation in from of the largest mummy “María.” It had to be done but the test gave a negative result. The door has been sealed for protection.

One of the tomographic images appeared to show a grape seed or similar in the intestines.

As had been previously mentioned histological analysis showed that the skin in both the large specimen and the smaller ones appeared to be that of a reptile.

Mr. Maussan was thankful to the people of GAIA -TV recognizing that without their auspices they would not have been able to carry out several genetic tests.

Vice-Rector of Research Dr. Martin Alarcón Quispe mentioned that keeping the bodies in the university and promoting their research could benefit the university which could become a hotbed to generate future researchers. He invited new scientists including those of the Ministry of Culture that had opposed. He also mentioned that he had been threatened. Some archaeology students loudly opposed during part of the presentation but I think that the scientific reasons which they presented could have been easily answered.

Unfortunately, the one Peruvian reporter most seriously dedicated to covering the news, Mr. Jois Mantilla announced that he would retire from covering this case to have more time for his paying work and family.

The mummies that the university is protecting (and for which it is coordinating further research with a new team of scientists) were shown to attendees, in spite of previous attempts by the Ministry of Culture to confiscate them.

The researchers associated with the Maussan-Gaia TV team were happy to have done their best to research these mummies.

Here are the links to the interviews: