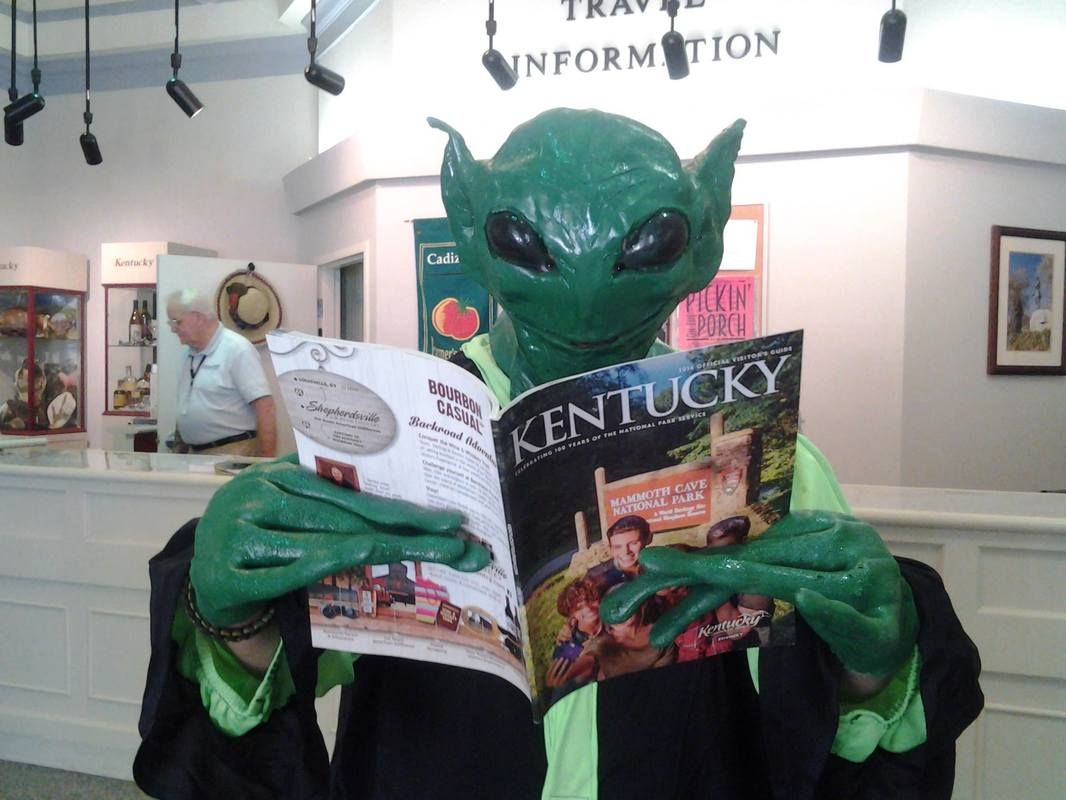 • On August 21, 1955, at the Sutton farmhouse in Kelly, Kentucky, Billy Ray Taylor saw a bright object shoot from the sky to the ground. He and the Sutton family spent “hours” that night shooting rifles at “twelve to fifteen” short, dark figures with large heads, eyes, long arms, and hand that resemble claws later dubbed a “Hopkinsville Goblin”. The four foot-tall creatures with glowing yellow eyes and spindly legs would peer into the farmhouse’s doorway and windows.

• Hopkinsville police station, deputies, reporters and military police were summoned to the scene, but found no aliens, or tracks, or marks that validated a spaceship having landed anywhere in the area. The headline in the Kentucky New Era newspaper read “Story of Space-Ship, 12 Little Men Probed Today.” From then on, it was known as the ‘Kelly Incident’. (see here for previous Exo-article describing the Kelly Incident)

• For decades the ‘Kelly Incident’ has been celebrated by the community. In 1995, they began to hold a public gathering known as the ‘Kelly Little Green Men Day Festival’. On August 16th and 17th, the community held its 64th annual festival featuring live music, an alien costume contest, book signings, and vendors selling thousands of goods. The free event also includes a “floating” spaceship and a reenactment of the shootout at a local theater called “The Invasion of Kelly!” (see movie trailer below)

• The encounter is one of the most significant and well-documented UFO cases in the United States, and the town of Kelly, Kentucky has found a fun way to keep the memory of the Kelly Incident alive.

Over the years many people have claimed to see UFOs in Kelly, Kentucky. Ever since 1995, the town hosts their famous Kelly Little Green Men Day Festival, which involves you guessed it, Aliens. This after several residents back in the day reported seeing “unidentifiable” creatures and lights at several rural farmhouses. Think of it kind of like the movie “Aliens,” but without Mel Gibson in it or those weird tin foil hats.

The encounter is one of the most significant and well-documented cases in the history of the United States of UFO incidents. While skeptics believe the reports of the UFO’s were definitely false, the town has sure found a way to keep the memory of the incident alive, by celebrating it every year.

It all began on August 21, 1955, in Kelly, Kentucky. While hanging on the Sutton farmhouse, Billy Ray Taylor saw a bright object that he believed to be a flying saucer shoot from the sky to the ground. He and the Sutton family spent “hours” that night shooting rifles at the dark figures that allegedly had large heads, eyes, long arms, and hand that resemble claws later dubbed a “Hopkinsville Goblin”.