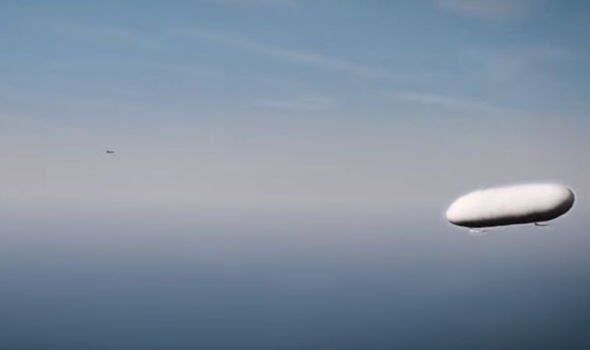 Listen to “E215 Space Force's Secret Tech Behind USS Nimitz UFO Will Be Revealed in 2020” on Spreaker.

• UFO researchers Blake and Brent Cousins, proprietors of the YouTube channel ‘thirdphaseofthemoon’, told the Daily Star that the Tic-Tac UFO video recorded by Navy pilots from the Nimitz carrier group off of the coast of San Diego in 2004 is reversed-engineered extraterrestrial technology that the US military has had for 30 or 40 years. Blake claims that pilots, airline passengers, and even he himself have seen this type of craft in the skies.

• Blake Cousins thinks that the Tic-Tac UFO is an example of secret military craft equipped with advanced alien technology that allows it to drop from an altitude of 20,000ft to just above sea level in a matter of seconds. Brother Brent believes the US Navy purposely identified the object as a UAP to hide from other countries the fact that our secret space program has this technology.

• Says Blake, “In my opinion, the tic-tac and that technology we have in our assets and they’re just not letting anyone know it’s in their assets.” “I have a feeling the whole Space Force program is using extraterrestrial technology that’s been around for a long time,” and that the US Space Force itself has secretly been in existence for years under the purview of the US Air Force.

• The existence of alien technology, and therefore aliens themselves, could be revealed if the Space Force is established next year. President Donald Trump has made it a priority to create Space Force as the sixth branch of the military, and the House of Representatives in Congress has already approved funding for the new military branch.

• “The tic-tac will be revealed to the public,” says Blake. “Will that be in 2020 when the Space Force is made public? I have a feeling it might.”

The technology behind the infamous USS Nimitz UFO incident could be revealed if the Space Force is established next year, a conspiracy theorist has claimed.

President Donald Trump has made it a priority to create the sixth branch of the military to combat threats in space.

It is penned to be established next year and that aim was given a boost this month when the House of Representatives approved a £562bn bill which included plans for the Space Force in it.

But there are those in the conspiracy world that believe the Space Force has been in existence for years, secretly testing alien tech and transforming it into military craft for the US Air Force.

Blake and Brent Cousins, of YouTube channel thirdphaseofmoon , believe one such craft was the USS Nimitz UFO.

The UFO – which has been officially identified as an Unidentified Aerial Phenomena by the US Navy – was described by two witnesses as somehow dropping from heights of 20,000ft to just above sea level in a matter of seconds.

It then shot off at speeds never seen before and hasn’t been spotted since.