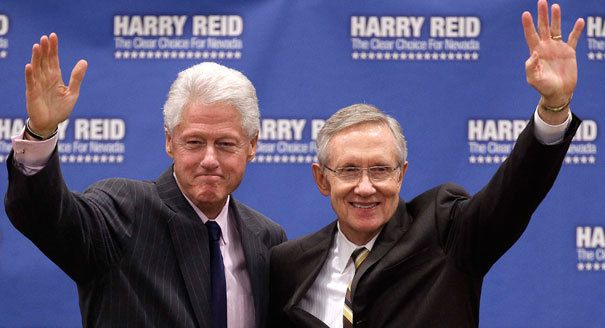 Listen to “e169 Senator Reid Encouraged by Newfound Interest in UFOs” on Spreaker.

• When former Nevada Senator Harry Reid was the Majority Leader, he was the go-to guy when it came to UFOs. When Bill Clinton was still president, Reid discussed UFOs with him during a White House visit. Reid told George Knapp that the truth behind UFOs was “something (Bill Clinton) was interested in”. In 2016, Hillary Clinton vowed to open up the Pentagon’s UFO files if elected. The Clintons still seek out Reid for his advice on UFOs.

• Reid had similar conversations with other national figures during his years in the Senate, including Senators Ted Stevens and Daniel Inouye, and former astronaut John Glenn. Knapp, a KLAS-TV Channel 8 reporter in Las Vegas (a CBS-affiliate), asked Reid what specifically John Glenn was interested in about UFOs. Reid said that Glenn remained tight-lipped about the subject, but he was “very interested”. “I didn’t want to push him,” said Reid.

• Bigelow Aerospace was the Nevada contractor who spearheaded Reid’s initial government sponsored UFO study. After that contract ended, Reid, along with Senators Stevens and Inouye appropriated funding for a scaled-down Pentagon UFO program in 2007 called Advanced Aerospace Threat Identification Program, or AATIP. In 2010, Lue Elizondo became the point man for AATIP. Now the Pentagon denies that Elizondo ever worked there.

• UFO critics have pounced on the claim that Elizondo never worked for a Pentagon UFO project. Reid says he’s not surprised. Reid says that there is a fringe group who want to control the UFO narrative, the “so-called conspiratorial folks”. “They go online and try to belittle Elizondo and me and anybody else that is trying to (figure out the UFO stuff) in a scientific way,” says Reid. “Elizondo is a man with a great record serving our country and …he’s not backing off. And I appreciate that very much.”

• Although the Pentagon says AATIP ended in 2012, Reid is informed that the program is ongoing, with greater resources than it had before. And the US Navy has announced that it will encourage UFO encounter reports by pilots, indicating that the subject is no longer taboo. The ongoing wave of media interest has even convinced Reid’s most formidable skeptic – his wife who admitted, “[M]aybe you aren’t crazy after all.”

• [Editor’s Note]  I’ll bet that the “conspiratorial folks” are even more nervous about how close Harry Reid is with Deep State toadies like Bill and Hillary Clinton.

LAS VEGAS (KLAS) — Former Nevada Senator Harry Reid says he’s enthusiastic about reaction to a once-secret study of UFOs that Reid and congressional colleagues authorized more than a decade ago.

The last two years have seen an explosion of interest in UFOs among mainstream media, but there’s been push back from conspiracy enthusiasts, and some military officials.

When Bill and Hillary Clinton came to Las Vegas in May to speak to a large audience on the Las Vegas Strip, their first stop was the Henderson home of former Senate Majority Leader Harry Reid. It’s the same path followed by many Democratic politicians and presidential candidates who visit Nevada, seeking guidance from the retired, but still-crafty senator.

Reid and the Clinton”s share an interest in a controversial subject — UFOs. As a presidential candidate in 2016, Hillary Clinton vowed to open up the Pentagon’s UFO files. And when Bill Clinton was still president, Reid asked him about UFOs during one White House visit.

George Knapp: “You discussed it with Bill Clinton. Don’t know if we can talk about this?”

Harry Reid: “Yeah, yeah Bill is, one thing about President Clinton, no one ever said he wasn’t smart. He was and is an extremely intelligent man, and this is something he was interested in.”

Reid was cagey about whether the Clintons discussed UFOs during their recent visit, but told us the subject is definitely on the agenda for their next get together. Reid had similar conversations with other national figures during his years in the senate, including Senators Ted Stevens and Daniel Inouye, who lent their support to the creation of a secret Pentagon study of UFOs, as well as senator and former astronaut John Glenn.

Knapp: “Did he ever give you specifics about why?”
Reid: “Nope, nope, but he, I didn’t want to push him, but he was very interested.”

]FAIR USE NOTICE: This page contains copyrighted material the use of which has not been specifically authorized by the copyright owner. ExoNews.org distributes this material for the purpose of news reporting, educational research, comment and criticism, constituting Fair Use under 17 U.S.C § 107. Please contact the Editor at ExoNews with any copyright issue.