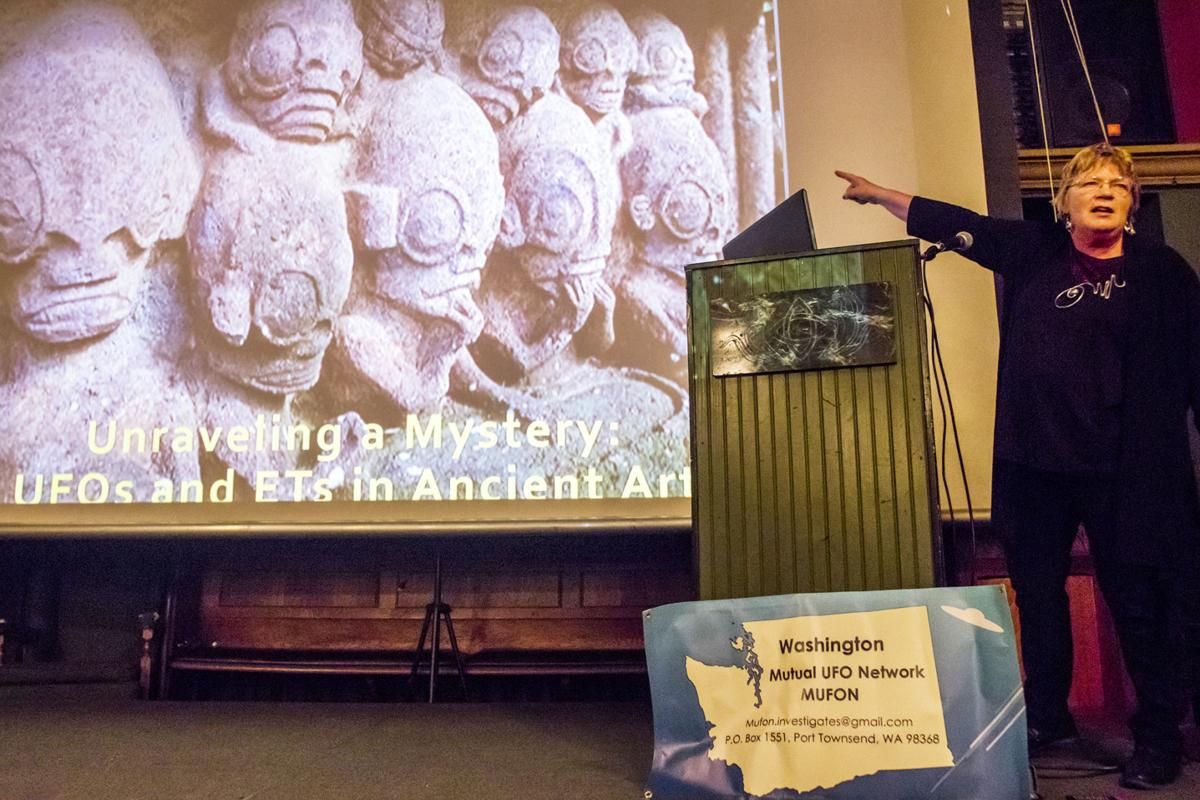 • Maurene Morgan, the Section Director for the Washington State Mutual UFO Network (MUFON), recently spoke on the topic of “Unraveling A Mystery: UFOs and ETs in Ancient Art”. Morgan presented artwork from different parts of the world and different time periods that showed recurring motifs. Morgan showed a series of images of ancient statutes of people depicted with goggles, flat and concave faces. Sometimes they are depicted as astronauts or reptilian beings. These images are from disparate civilizations that should not have contact with each other. “Ancient art has something to say about our origin,” Morgan said, and that the only common theme and explanation for this was an “alien presence in human affairs.”

• Morgan’s belief in extraterrestrials and UFOs stems from her skepticism of how the human story has been portrayed. There is still no understanding about how life began. “The reality we are given is a culturally constructed one to basically keep us dumb and happy,” said Morgan. “We have this real ego thing. ‘We’re the most intelligent species in the universe.’ Well what if we find out we’re a hologram or a ‘Sims’ game?” “What if we do find out we’re ‘owned’ by somebody and we’re being genetically harvested or souls harvested or something like that. There is evidence for all of these.”

• Morgan denied an audience member’s argument that there are no recent accounts of extraterrestrials, and that the physical evidence seems to diminish as technology increases. Since taking over as State Director last June, she has received 140 reports of sightings or about 30 each month. “I’m pretty sure this stuff is still happening,” Morgan said.

• [Editor’s Note] There is a vast and organized effort by an ET-controlled elite human cabal to portray humans as simply evolving from primates all on our own, while denying the existence of an extraterrestrial presence and their involvement in the development of the human species on Earth over hundreds of thousands of years, in order to perpetuate an agenda of control and manipulation over the human population. Those researchers who now struggle to reveal humanity’s true history in the face of ridicule and exclusion from the ‘mainstream scientific community’ will one day be honored and celebrated for their courage.

Maurene Morgan’s belief in extraterrestrials and UFOs isn’t exactly mainstream. However, at her Tuesday night presentation in Centralia, titled “Unraveling A Mystery: UFOs and ETs in Ancient Art,” the audience filled nearly every seat in the Olympic Club Theater.

“Put all your preconceived notions aside, open up your brain, take this information in and let your mind go where it wants to go,” Morgan said.

Morgan, the Washington State Mutual UFO Network (MUFON) state section director, took artwork from different parts of the world, from different time periods, and showed recurring motifs in it. The presentation aimed to prove that the only common theme and explanation for this was outside influence.

“Ancient art has something to say about our origin,” Morgan said during her presentation.

The presentation was sponsored by Centralia College, Timberland Regional Library and McMenamins as a lead up to the 19th Annual McMenamins UFO Festival, which takes place next month in McMinnville, Oregon.

Morgan began by saying she was “making a case for alien presence in human affairs.” She noted that there is still no agreement for how life began, and there are seven main theories among mainstream scientists.

Morgan’s belief in extraterrestrials and UFOs doesn’t seem to stem from a willingness to accept any idea, but rather, extreme skepticism of how humanity has chosen to write its story.

“The reality we are given is a culturally constructed one to basically keep us dumb and happy, particularly if what’s happening isn’t necessarily for our benefit,” Morgan divulged after the presentation.

Morgan, who spent five years sailing around the world from 1978 until 1983, spent a good portion of her presentation discussing the Marquesas Islands, a group of volcanic islands in French Polynesia.
Morgan showed stark contrasts between statues she described as “intimate family portraits” and statues with “piggy faces,” both found in the Marquesas. The latter feature is found in various places all over the world.

“There must be a common source for that motif,” Morgan said. “Either these are self portraits, or the people are depicting something they see in their environment.”

Morgan showed a plethora of images where people depicted goggles, flat and concave faces and reptilian beings. Many of the images were from disparate parts of the world, from civilizations that should not have had contact with each other.