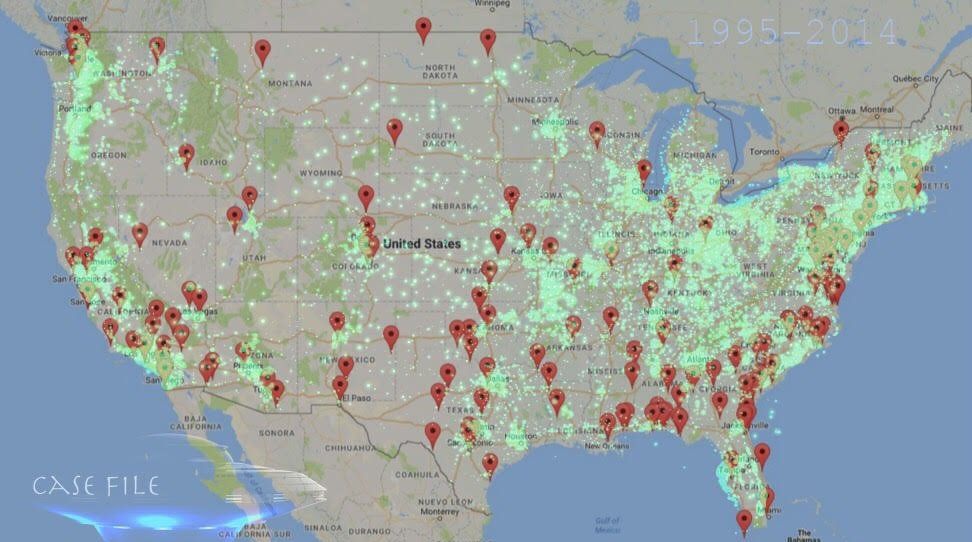 • In 2017, data analyst Adam Crahen plotted all 58,828 reports submitted between 1995 and 2014 to the National UFO Reporting Center on a map of the United States, resulting in a green swath across nearly the entirety of the nation. When this UFO map is overlaid with a map of all US military installations (see above), they generally coincide.

• This might mean that aliens take a particular interest in what our military is doing. Or it may mean that many UFO sightings are nothing more than misidentified military aircraft. Military aircraft are often mistaken for Unidentified Flying Objects because their shape and unconventional behavior.

• Or could it be both of these explanations? After all, the National UFO Reporting Center has documented nearly 60,000 sightings over a 19-year span.
• [Editor’s Note] Or could it be that the extraterrestrials and the US military are working together?

In the past few months, the idea of Unidentified Flying Objects as spacecraft from another world has enjoyed a resurgence in the minds of the public, thanks in no small part to the revelation that the Pentagon has been secretly devoting millions of dollars to the investigation of just such anomalous sightings for years now. Of course, public interest in the idea that we’re being visited by advanced air platforms hailing from across the sea or across the galaxy, tends to be cyclical, and one could be forgiven for assuming that reports of strange objects in the sky had died down in the years since the last time the X-Files was on the air. Surprisingly, or perhaps, unsurprisingly (depending on your beliefs) that doesn’t seem to be the case.

The internet has allowed independent organizations devoted to the serious (and sometimes not-so-serious) study of UFOs the reach they need to compile massive amounts of data regarding sightings and even supposed interactions with everything from flying saucers to time machines. These largely self-reported sighting databases maintained by groups like The National UFO Reporting Center offer thousands of sightings to click through and read about – providing either a glimpse into the honest reporting of thousands of Americans… or the ravings of mad men and internet trolls. It’s honestly almost impossible to differentiate between the two.

None the less, there are some interesting things to glean from these data aggregators, whether you believe each data point represents a legitimate sighting of something unusual, the delusion of a wishful thinker, or the geographic location of an internet troll. Acknowledging that, deep within the Pentagon, there are senior defense officials tasked with investigating sightings of this sort suggests that there’s some value to be had in taking a look at some of these cases, or from a macro-perspective, to looking for trends in sightings that may offer reasonable explanations for regions with abnormal high rates of sightings.

Last year, data analyst Adam Crahen took of one of the largest databases of alleged UFO encounters online, maintained by the the aforementioned National UFO Reporting Center, and plotted all 58,828 reports submitted between 1995 and 2014 on a map of the United States. The final product is an impressive, or perhaps frightening, green swath across nearly the entirety of the United States, seemingly suggesting that UFOs are not only here, but American airspace is just lousy with them.
Or maybe not. It comes as no surprise that more sightings are reported in areas of the country that are heavily populated (more people means more sightings) but the greener patches of the map also seem to coincide with something else.

When laying that same map of reported UFO sightings over a U.S. map showing the locations of all military installations, an interesting trend starts to emerge: many of the regions that seem to show a high frequency of UFO reports coincide with the locations of military installations. For the conspiracy minded, this might mean our alien visitors have taken a particular interest in what our military is up to… but others might be inclined to conclude that many of these supposed UFO sightings may be nothing more than misidentified military aircraft.