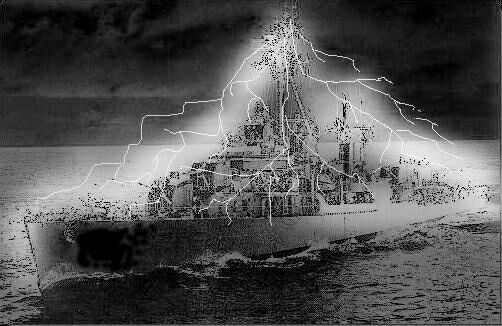 Invisible Sailors and a Bar-Room Brawl

Just like the Roswell saga of 1947, the 1967 Patterson-Gimlin film of a Bigfoot (or of a man in a suit, depending on your opinion), and the theory that the Moon-landings were faked, just about everyone has heard of what has become infamously known as “The Philadelphia Experiment.”

According to the wild claims of a man named Carlos Allende (told to writer Morris K. Jessup in the mid-1950s) in 1943, and during a classified project, a ship was made invisible and teleported from the Philadelphia Naval Shipyard to Norfolk, Virginia. And back again. It was all said to have been an outgrowth of Albert Einstein’s Unified Field Theory. Allende claimed the ship in question was the DE 173 USS Eldridge. Allende didn’t stop there: he said he saw one of several such experiments from the safety of his own ship, the SS Andrew Furuseth. Few researchers today have much time for Allende’s stories.

No one disputes that something led to the creation of the legend of the vanishing ship and its crew. Indeed, even the U.S. Navy admits that some of its wartime experiments may have provoked a number of the rumors. There is one aspect of the story that often pops up in conversations of the Philadelphia Experiment kind, mainly because it’s so entertainingly weird.

Investigator Bill Moore (who, in 1979 and with Charles Berlitz, wrote The Philadelphia Experiment) revealed a strange story extracted from a newspaper that has still yet to be identified. It described the sudden vanishing – and I do mean vanishing, as in here one second and gone the next – of a number of sailors in a local pub.

With the eye-catching headline of “Strange Circumstances Surround Tavern Brawl,” the story went as follows:
“Several city police officers responding to a call to aid members of the Navy Shore Patrol in breaking up a tavern brawl near the U.S. Navy docks here last night got something of a surprise when they arrived on the scene to find the place empty of customers. According to a pair of very nervous waitresses, the Shore Patrol had arrived first and cleared the place out -but not before two of the sailors involved allegedly did a disappearing act. ‘They just sort of vanished into thin air… right there,’ reported one of the frightened hostesses, ‘and I ain’t been drinking either!’ At that point, according to her account, the Shore Patrol proceeded to hustle everybody out of the place in short order.”

The story continued: “A subsequent chat with the local police precinct left no doubts as to the fact that some sort of general brawl had indeed occurred in the vicinity of the dockyards at about eleven o’clock last night, but neither confirmation nor denial of the stranger aspects of the story could be immediately obtained. One reported witness succinctly summed up the affair by dismissing it as nothing more than ‘a lot of hooey from them daffy dames down there,’ who, he went on to say, were probably just looking for some free publicity. Damage to the tavern was estimated to be in the vicinity of six hundred dollars.”

Moore and Berlitz’s assessment was that: “Little else can be said about the clipping itself. Anything approaching a proper analysis of the clipping is impossible, since the authors possess a photocopy only. Upon close examination, however, the possibly significant fact emerges that the column width is a bit greater than was used by any of the Philadelphia dailies in the 1940s. This suggests that the article may have originated in a local or regional newspaper in the Philadelphia area rather than in one of the metropolitan papers.”