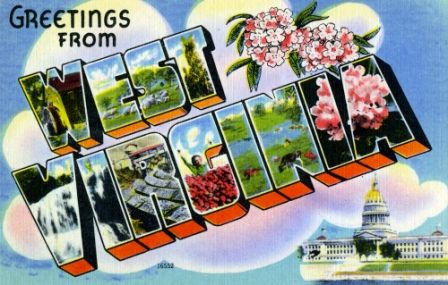 • Here are four incidents of people in West Virginia seeing a UFO.

• In 1976, in Webster Springs, West Virginia a nurse at the local hospital was driving home with her son when they cross the Twin Bridges near Bergoo when they both saw a three-sided UFO craft flying close to their car. They stopped to look at the craft, and detected a terrible odor. Then they continued home puzzled but unharmed.

• On April 8, 1994, in Quiet Dell, Harrison County, WV some people driving in a car noticed a silent, circular object in the sky with dome-shaped windows in the center. It hovered above the trees then came back down close to the ground. The car radio screeched loudly, the dash lights dimmed, and the car almost stalled. But it returned to normal when the craft left.

• In 1965, a group of children in the Valley Head area of Randolph County, WV, were outside playing when an 11-year-old boy saw a disc-shaped craft, about 15 to 20 feet in diameter, hovering about 50 feet above the trees. It shot across the night sky, over Point Mountain and towards the town of Webster Springs.

• On Feb. 20, 1994 in Morgantown, WV a couple were walking along University Avenue when they saw aircraft with a very bright beam of light aiming towards the ground. They assumed it was a helicopter until they noticed that it was actually a silent, metallic, whitish-gray triangular craft. It hovered, turning its’ light beam on and off, and then sped off in the clouds towards Fairmont. Several other onlookers witnessed this event as well.

With the arrival of warmer weather, we find ourselves invariably spending more time outside. Here in the country, with no city lights to water down the starlight, the stars glisten and twinkle on clear nights. Occasional falling stars, a gliding satellite, and a glimpse of the Milky Way always make for interesting sky watching. And then there is always the unexpected event, the unidentifiable sighting.

UFOs or Unidentified Flying Objects have been spotted and documented throughout the ages and across the entire world. It is more common than you can imagine unless, of course, you are one of the hundreds who have already seen “one”.

Webster Springs, West Virginia in 1976 finds us with one such event. A nurse at the local hospital clocks out and is driving home with her son when they cross the Twin Bridges near Bergoo. As they are driving they spot something unusual. They both see a three-sided craft within close range of their car. They stop the car, incredulous to what they see when they are both overcome by a terrible odor. They finish their trip home unharmed, but puzzled by what occurred.

Quiet Dell, West Virginia on April 8, 1994: In this area of Harrison County, a Suds Run road traveler spots a circular object in the sky which has dome-shaped windows in the center. It makes no sound. It hovered above the trees then came back down close to the ground not making a sound. The people in the vehicle noticed their car radio screeching loudly and the car almost stalled and the dash lights dimmed. The next day, the car was fine but I bet the witnesses were still shaky!

1965 finds us in the Valley Head area of Randolph County. A group of children were outside in the evening playing hide-and-seek. An 11-year-old boy ran around the side of a hill by himself and saw something unexpected. It was hovering about 50 feet above the trees and was disc-shaped. The youngster estimated the object to be about 15 to 20 feet in diameter. It shot across the night sky, over Point Mountain and towards the town of Webster Springs. This young boy is now a full-grown man and remembers this event with great detail as if it happened yesterday.