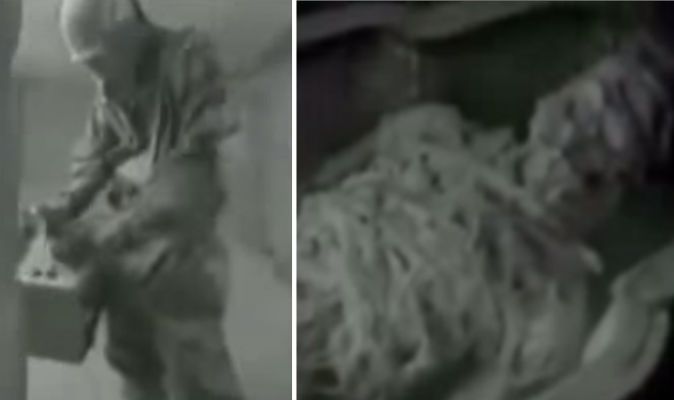 • A ‘mafia source’ has apparently extracted a video file from Soviet KGB archives of an effort by the Soviets during the 1960s to search for extraterrestrial remains buried in the Egyptian desert 13,000 years ago. The video (see below) shows KGB agents recovering a mummified, 6’-7’’ alien body.

• Sami Sharaf, a founder of the Egyptian Intelligence Service and the Minister for Presidential Affairs in the 1960s under President Gamal Abdel Nassar, is said to have led the excavation team to unearth the alien mummy.

• According to The Daily Mail, the Soviets were searching for alien remains in the Egyptian desert to obtain military secrets or advanced technology of some sort. Many ancient astronaut theorists believe that the Egyptians were assisted by extraterrestrial technology in building the great pyramids in Giza, Egypt.

• A Russian scientist by the name of Viktor Ivanovich claims to have seen classified materials surrounding this expedition, and validated the finding of the alien mummy. (This might be the same Viktor Ivanovich who developed flight control systems for rockets for the Russian space program.)

An alien mummy was supposedly buried in Egypt 13,000 years ago. Recently, found footage has been unearthed of KGB agents making this monumental discovery. While this sounds intriguing, could this be possible?

Ancient astronaut theorists believe that we have been visited by UFOs in the past. Some individuals believe that the Egyptians had extraterrestrial assistance when building the great pyramids. While others in the scientific communities believe that human ingenuity is behind some of the greatest monuments ever constructed.

According to The Daily Mail, the Soviets were searching for alien remains in the desert because they wanted to obtain military secrets. While this is vague reasoning it could mean that they were hoping to acquire advanced technology of some sort.

The video that was recovered supposedly came from a mafia source that apparently extracted the file from the KGB archives. Sami Sharaf, one of the founders of the Egyptian intelligence service (and Minister for Presidential Affairs in the 1960’s under late President Gamal Abdel Nassar) led the excavation team to unearth the alien mummy.