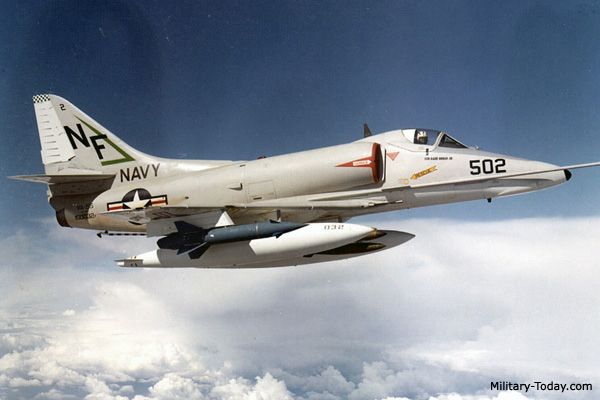 Captain Horn’s Encounter: Navy Pilot Shares His Story of Being Chased by a UFO

• Captain Les Horn of Eagle River, Alaska is a retired military pilot with 5,600 hours of flight time in 34 different types of aircraft, while serving 26 years in the US Navy. He holds advanced degrees in physics, nuclear engineering, and energy resources, and is a member of the Society of Experimental Test Pilots. In April 2018, Captain Horn told the following story in a presentation at the University of Alaska, Anchorage.

• In 1966, Horn and a backseat radioman were flying a Navy A-4 ‘Skyhawk’ (pictured above) out of Bunker Hill Air Force Base in Missouri, at sunset. As they climbed to an altitude above that of commercial aircraft, departure control at Bunker Hill passed them off to the control tower at Indianapolis center. Horn was informed of a commercial airliner passing to his left as they continued to climb and gain altitude. Then Horn picked up a blue dot of light to his left. The strange light kept getting brighter, but Indianapolis center remained uncharacteristically quiet.

• The Indianapolis center supervisor insisted that he was still seeing ‘negative traffic’, but kept asking Horn the object’s position. Horn told him that this light object had come around Horn’s back and then in front of his plane. By now, the night sky was pitch black with no moon. Horn had no point of reference to determine the light object’s distance, but it appeared to maintain a constant distance. Then the object came around again and took a position on Horn’s wing. Horn reported to Indianapolis control as the object remained “in formation” with Horn’s plane.

• As the object traveled alongside Horn’s plane, Indianapolis center still could not see the object on radar. “The area of lights was kind of diffuse,” said Horn. “I couldn’t really tell what it was.” But by now the A-4 had reached its high altitude, and the object was still traveling off of his wing, tracking the plane. “I asked my back-seater (radioman), ‘Jim, are you seeing what I’m seeing?’ He says ‘I sure as hell do!’”

• Suddenly, the voice of a more senior supervisor came on the radio and asked Horn if he still had the contact in sight. When Horn replied in the affirmative, the top supervisor informed Horn that he was “clear to cruise”. “Cruise” means that you can go anywhere, fly any speed, go any altitude, and they will follow you (on radar) and keep anybody from hitting you. This is something you seldom hear from the FAA, especially when you’re flying on instrument readings.

• Horn dropped his wing to change direction by about two degrees. The light object began to come into focus better. There were no red and green navigation lights that are required on any aircraft. There was no formation lights as on military aircraft, and there were no window lights that would be seen on a commercial airliner. Horn was still having difficulty gaining perspective on this object. Said Horn, “I didn’t see anything within my realm of experience to help me identify what this was.”

• As Horn got closer to the object, he informed Indianapolis center, “[I]t appears the lights are moving in a clockwise direction (around the craft), and there’s a dome light.” All of the sudden Horn could make out the structure of the object. It was large, circular, and made no sound. Then the object began pulling ahead, in front of Horn’s plane. It started accelerating and climbing, and then it went straight up. In about three seconds it contracted into a point and disappeared into the starfield above him. It was gone.

• Stunned, Horn stopped talking for a long time. The older guy’s voice came up again asking, “Five five, radio check. Are you still there?” And I said “Roger.” “The bogey just pulled away and I have no contact with it.” The FAA never saw this object.

• “I knew that I was looking at a very non-Newtonian object,” Horn says. “[T]here were no wings suspending or holding this object up against the forces of gravity.” “When this object was ‘formating’ on me, and I closed with it, that’s when it started that rapid departure. But I did notice that his motions were not like the way an aircraft would fly.” “[I]t moved in very jerky motions, especially when it started accelerating away from me. Any structure that I was familiar with would have just torn itself to pieces pulling away like that.”

• The next day, The Washington Post headline read: “Many UFO Sightings Reported Over Indiana.” But Horn says that he never used the words “UFO.” In the Navy it’s a “bogey”. Horn said he never believed in the UFO stuff he’d heard about. “[B]ut now this was happening. This was different. …[S]omething that I didn’t understand was in my world.”

Captain Les Horn, United States Navy (retired), lives in Eagle River. Here he tells his story about a fateful flight in 1966 when he and his radioman were chased by a UFO. Captain Horn has extensive background in flight and airborne weapons systems testing, 26 years of service, 5,600 hours flying time in 34 aircraft types and models, and is a member of the Society of Experimental Test Pilots. He holds advanced degrees in physics, nuclear engineering, and energy resources.

We were flying a version of the A-4 that was used for carrier training. There was room for two pilots. You kind of team up with the guy you worked with and you’d take turns on the radios or driving the airplane.

We flew to Bunker Hill Air Force Base in Missouri. This was a late afternoon/evening flight to try to get some night time. We departed right about at sunset, and I was driving. As we launched out of there, we started our usual climb.

So, climbing out of Bunker Hill, we were passing 16,000 feet for flight level 470. Usually when you’re in the more powerful military aircraft, you can take the higher structure, because the 30s are usually crowded with airliners, but up there we know we probably only had military pilots to deal with. We were passing through the 20s going into the 40s. And as we started out, we were talking to departure control and he handed us off to Indianapolis center. And that was about a half-hour after sunset.

And so Indianapolis called up and they said “we have Delta departing Chicago Midway. He’s passing through 16,000 on route 330 passing your nine o’clock position, will clear,” and I look over and say, “tell your traffic,” and we continue to climb. Meanwhile, I picked up a blue dot of light. I expected him to call that traffic sooner or later because it’s kind of crowded in the Indianapolis-Chicago axis.
|
Then, finally, this light was getting a little lighter, brighter, so I said, “Do you have my traffic? He’s at my 10 o’clock passing, left to right,” And I wait one minute. Silence. And he says “Negative.” I said, “Well, traffic in sight. He’s at my nine o’clock, passing to my six.” And another voice came up, probably his supervisor. And he said, “triple five [the plane identification number], say you’ve had contact?” and I said “well, he’s now in my 10 o’clock position, level, appears to be closing, distance unknown.”

I didn’t have it. I flew an attack airplane. We didn’t have inflight radar, we had air-to-ground. He said, “Negative traffic,” but he kept asking me and I kept telling him. I’m still flying on my departure heading and this light, I didn’t know what it was, came around behind me and then in front of me.
Mind you, I couldn’t tell because I had no point of reference. This is at night, black night, the moon wasn’t up yet. That light could have been right outside of my instrument, right outside of my canopy, or it could have been 10 miles away. I didn’t know where it was, but it maintained, it looked like to me, kind of a constant distance, but it came around me. I was talking to center all the time and telling them, and it came around and it took a position on my wing. And I say on my wing, but I didn’t know how far away it was. And there it sat.