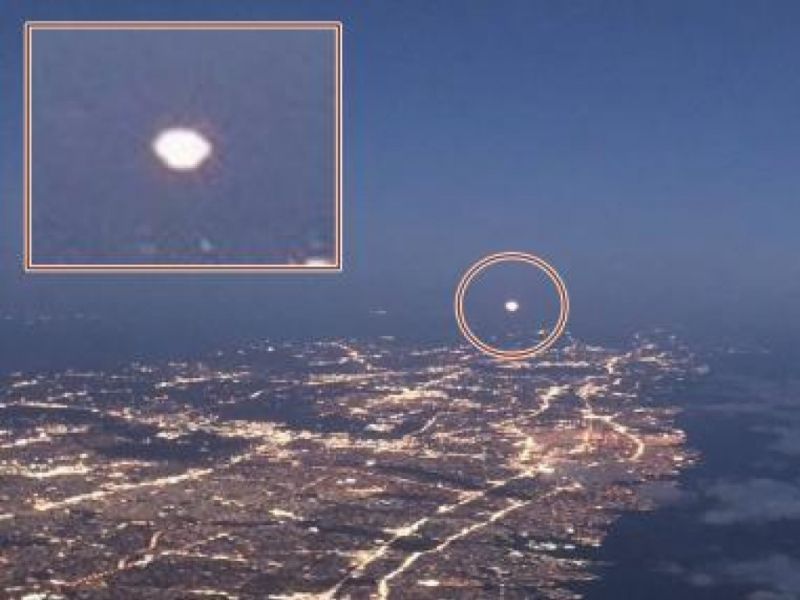 • On November 23, 2018, a passenger in a commercial plane video recorded an orange glowing UFO over the state of New York. A copy of the recording was provided to MUFON (the Mutual UFO Network).  (see 2:02 minute video below)

The staff of Mufon has received the materials sent to witness events from the United States. The passenger of the plane captured on camera the flight of UFOs over New York, and was scared impressive dimensions of the object.

The author of the story published the video online, noting that for the first time faced with such a spectacle. Unusual alien spacecraft had the shape of a flying saucer, and was not going to hide from the eyes of people watching his maneuvers in the sky.

While researchers check information to find out the intentions of extraterrestrial visitors. The early inhabitants of the city were also afraid of the appearance UFO, which resembled a huge metal butterfly.

Roswell, New Mexico – June 30, 2012 – [ZNN] Captain Robert Salas USAF (Ret) – currently speaking in Roswell New Mexico – has announced that the office of Congressman Peter King (R), NY has acknowledged receipt of affidavits from retired Air Force officers and other documents pertaining to multiple, unauthorized incursions over US nuclear installations and the disabling of nuclear missiles at these installations by craft of unknown origin.

These evidentiary documents are directly related to national security concerns.

[Members of the press may access affidavits and documents by contacting Captain Robert Salas or Victor Viggiani using the contact details below.]

The Most Rev. + Chrysostomos

Is FAA covering up flight delays due to New York UFO sighting?

On October 13, 2010 several dozen UFOs were sighted over Manhattan, New York City. Reports of the sightings began from around 1:30 pm and lasted into late Wednesday afternoon. On being approached by several news media for comment, the Federal Aviation Authority (FAA) first reported nothing appeared on their radar. When it was later learned that a school in nearby Mt Vernon had released several party balloons in the sky, many media sources claimed the mystery behind the New York UFOs was solved. What media sources covering the New York UFO sightings failed to mention was that from 6:45 pm of the same day (October 13), the FAA had closed down air operations at New York’s three airports for about an hour.

The FAA claimed that the flight delays were due to a “gas smell” from the FAA radar facility in Westbury that handles New York City flights. According to an Associated Press story on the mysterious gas smell, it led to the radar facility being closed and the evacuation of radar technicians. What’s more likely is that the FAA closed its radar facility and delayed flights due to the UFOs hovering at the time over Manhattan. More importantly, the UFOs may have interfered in some way with the radar equipment. If so, then it appears that the FAA is covering up the true significance of UFOs witnessed over New York City.

Here’s what Jim Peters, an FAA spokesperson, first said when asked about the UFO sightings over Manhattan.

We re-ran radar to see if there was anything there that we can’t account for but there is nothing in the areaâ€¦. There was some helicopter traffic over the river at that time and we checked with LaGuardia Tower. And they said they had nothing going low at that timeâ€¦. Nothing that we can account for would prompt this kind of response.”:

Peters went on to claim, “if it was a weather balloon or any kind of organized balloon release, authorities should have been notified in advance. Police officials said they had received no notification.”

While the FAA was denying any significance to the New York UFO story, an Associated Press story revealed that New York’s three major airports had been disrupted during the UFO sighting. The official cause for the disruption was the “smell of gas” at the radar facility handling all three major airports that led to its brief evacuation. Here’s what the AP reported

Authorities say the radar facility that handles all arrivals and departures for New York City’s three major airports was briefly evacuated after the smell of gas was reported. Flights were being delayed. Federal Aviation Administration spokesman Jim Peters says the facility in Westbury was evacuated as a precaution at about 6:45 p.m. Wednesday. A handful of air traffic controllers remained behind. He says other staff members were cleared to return about an hour later. But he says the evacuation led to residual delays at LaGuardia, Kennedy and Newark airports. The FAA’s website says departures at LaGuardia were delayed up to an hour. It wasn’t immediately clear how many flights were affected.

The one hour closure of air operations at New York’s three airports together with the evacuation of the radar facility during the appearance of UFOs over Manhattan may simply be an extraordinary coincidence. What’s far more likely, however, is that the FAA is covering up the true significance of the UFOs sighted on October 13, and how the UFOs led to flight delays for three major airports, and even interfered with the FAA’s radar facility in a way that led to its closure. This has many parallels with recent airport closings in China where radar operations were disrupted by UFOs.

The likelihood that the FAA is covering-up the significance of the UFOs leads to serious doubt over the party balloons explanation now being circulated by the mass media as to what appeared over New York City. The New York Post , Fox News and other media sources have all claimed the UFOs were balloons released by children at a nearby school in Mt Vernon. A Youtube video reveals that about a dozen party balloons were accidently released around midday for a birthday celebration.

The party balloon explanation is however very unlikely given the time involved between initial and later reports. Even though the New York UFO sightings were first officially reported at 1:30 pm, shortly after the accidental Mt Vernon party balloon release, witnesses described seeing the UFOs as early as 9:30 am on October 13, and that they numbered as many as 50. Also, the closure of the New York radar facilities and flight delays began at 6:45 pm. Up to this time, UFOs were being sighted and filmed by New York residents. Could a dozen party balloons hover for more than five hours over Manhattan after first drifting down from nearby Mt Vernon, and remain stationary over NYC? More importantly, could party balloons have mysteriously contributed to the evacuation of the Westbury radar facility, and flight delays for up to an hour at three major airports?

The party balloon explanation falls apart at closer examination. It nevertheless appears to have been quickly accepted by the mass media in what appears to be an officially sanctioned attempt to cover up the truth behind the New York UFO sightings. This leads to the most plausible explanation that the UFOs were intelligently controlled objects that caused problems with the Westbury radar facility. This led to flight delays at New York’s three major airports. This seems to be a similar series of events as occurred earlier this year at several Chinese airports after UFO sightings. Most significantly, what happened over New York’s skies vindicates the October 13 prediction made four months earlier by a retired NORAD officer that extraterrestrial vehicles would begin appearing over major world cities as the first step in a process to prepare humanity for the truth that we are not alone.

Is 2010 the year of discovery for extraterrestrial life