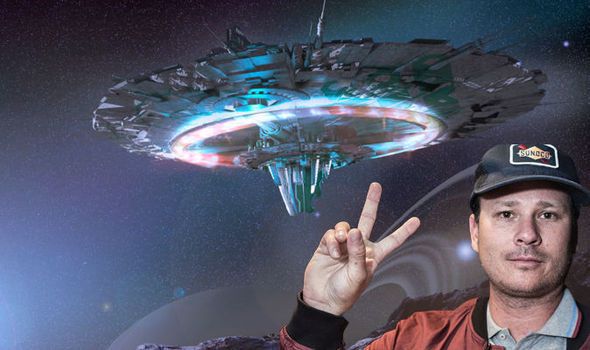 • Tom DeLonge’s recently formed “To The Stars Academy” member, Luis Elizondo, is a recently retired career intelligence officer who has worked for the US Army and the Dept of Defense, and as the National Counterintelligence Executive, Director of National Intelligence, and Director for the National Programs Management Staff.

• For the last 10 years of his career, Elizondo “ran a sensitive aerospace threat identification program focusing on unidentified aerial technologies.”

• The Huffington Post noted that “In less than two weeks after leaving the Pentagon, Luis Elizondo confirmed that UFOs are a real; they exist, and they have been officially documented.  Can anyone argue with this fact now?”

• The “To The Stars” team aims to make the reality of UFOs public knowledge. “[T]here is sufficient credible evidence… that proves exotic technologies exist that could revolutionize the human experience.”

• Could this recent mainstream initiative be a true disclosure movement?  Or is Tom Delonge simply being used by the US government to further some hidden agenda? Do they want to confirm the reality of UFOs, but debunk the extraterrestrial hypothesis by stating these craft are all man made? Do they want to create more awareness so they can perform a “false flag alien invasion”?

“Yes there have been crashed craft, and bodies recovered. . . . We are not alone in the universe, they have been coming here for a long time. I happen to be privileged enough to be in on the fact that we have been visited on this planet, and the UFO phenomenon is real.” Who is this high ranking official that “blew the whistle” on the reality of Unidentified Flying Objects (UFOs)? His name is Luis Elizondo, and he’s the current Director of Global Security and Special Programs for the recently launched To The Stars Academy.

Elizondo is just one of many prestigious individuals to join the academy. A career intelligence officer, his experience includes working in the U.S. Army, the Department of Defense, and the National Counterintelligence Executive, and he spent time as the Director of National Intelligence. He’s also managed the security for several sensitive projects for the U.S. government as the Director for the National Programs Special Management Staff.

For the last 10 years of his career, Elizondo “ran a sensitive aerospace threat identification program focusing on unidentified aerial technologies.” Where he learned that, as he mentions in the video below at approximately the 20 minute at 50 second mark, “the phenomenon is indeed real.”

To The Stars aims to make the reality of UFOs public knowledge. Some of these objects perform maneuvers and travel at speeds that defy our understanding of physics, and Elizondo is just one of many people trying to raise awareness about it. As New York Times best-selling author and journalist Leslie Keen explains in an article she wrote for The Huffington Post:

Something extraordinary was revealed today. Former high-level officials and scientists with deep black experience who have always remained in the shadows came forward on one platform. These insiders have long-standing connections to government agencies which may have programs investigating unidentifed (sic) aerial phenomena (UAP/UFOs). The team includes a 25-year veteran of the CIA’s Directorate of Operations, a Lockheed Martin Program Director for Advanced Systems at “Skunk Works”, and a former deputy Assistant Secretary of Defense for Intelligence.

Keen describes meeting Elizondo a week after he resigned from the Pentagon to work for the academy, saying, “In short, less that two weeks after leaving the Pentagon, Luis Elizondo confirmed that UFOs are a real; they exist, and they have been officially documented. Can anyone argue with this fact now, given where this man comes from and what he knows?”

The great thing about the initiative is that it focuses on bringing these technologies to light and creating awareness on how they can be used to push humanity forward. Although technology is not the answer to all our problems, but rather the consciousness behind the technology and how we use it, UFOs do present a number of questions, with propulsion systems being one of them.

They’re certainly not stopping at the gas station for a fill-up.

“There is another way, whether it’s wormholes, or warping space, there’s got to be a way to generate energy so that you can pull it out of the vacuum, and the fact that they’re [extraterrestrials] here shows us that they found a way.” – Jack Kasher, Ph.D, Professor Emeritus of Physics, University of Nebraska

The To The Stars team says they have been “operating under the shadows of top-secrecy for decades” and believes that “there is sufficient credible evidence of UAP that proves exotic technologies exist that could revolutionize the human experience.”